Jake and Amy create a system to balance work and childcare. Rosa gets a new houseguest..

People shouldn’t review so earlyI understand most people (including myself) didn’t like the first episode but giving it one star based off of that is ridiculous. Episodes 3 and 4 were way better..CheryblosenScore: 5/5

Not for Fake Fans, but it is less funAnyone attacking the show for tackling current social change was never really a fan. The show has ALWAYS included social commentary, and frankly it would have been impossible to do a season after a year long absence that saw riots, police reform and a pandemic, without addressing those events. That it’s a comedy show makes things tricky but not addressing the world as it is would have been dishonest and hollow. Luckily the show remains funny. Several episodes certainly have downbeat real life elements that are impossible to ignore, but they’re able to include enough humor to make it easier to digest and might even provoke some thought and discussion. Largely the season is what you’ve come to expect over the years. It’s funny, the characters are still lovable and it has a lot of heart. The world changed over the last few years and it’s nice to have at least one more short season to see these characters one more time. Those more issue oriented episodes have laughs, but they do teeter on being a bummer. And of course, despite some quality work, the season is often less fun than the earlier years..Fletch F. FletchScore: 4/5

Quit the funny for politicsI’ll never watch CNN-99 again. Too much on the news already telling everyone how racist and homophobic they are. Is it really necessary to hijack every show and plug these talkings points in each one?.Elduque7Score: 1/5

Not funny anymore!There are moments, but overall it’s just not that funny anymore. This is likely because he chemistry has changed over the years but also because the focus has obviously changed..Herberto89Score: 1/5

Hate to See “Law Enforcement” so WokeGet woke, go broke. Hate that I already paid for the season to find out the 99 is pandering to political correctness and wokeism. Pathetic to attempt to “tackle” to problems with this comedy. Sad..Golfer99!Score: 1/5

This show saved my lifeThis has been my comfort show for the longest time and i can’t imagine a world where this show didn’t make me laugh to tears when i needed it the most. pls watch it.Maria antonia acScore: 5/5

Cool cool cool coolI wish the show ended on season 9, episode 9—but all is well and the the final season seems promising so far. Nine Nine!!!.Aaron AcedoScore: 5/5

Past seasons were good, this is trash!I enjoyed all of the previous seasons, but this season is nothing but unfunny political side notes and anti police ideology. I purchased the season and then deleted it from my account..CrzyManDanScore: 1/5

Save your moneyThe first 7 seasons of this show were some of the very best in television. The first 10 minutes of season 8 was enough for us to never watch again. We didn’t laugh a single time during episode 1, it’s all politics and garbage. Unfunny..Uteller3786Score: 2/5 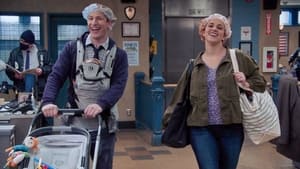 The squad takes up Holt on an offer for a weekend getaway.

Jake takes an old friend for a ride.

When the FBI takes over a high-profile case, Jake keeps digging.

The squad comes together to work an important high-stakes case.

Part 1 of 2. The squad takes stock of their eight years together and looks toward their future.

Part 2 of 2. The squad takes stock of their eight years together and looks toward their future.

A workplace ensemble comedy about what happens when a hotshot detective and his diverse group of colleagues get a tough new captain with a lot to prove.

Award-winning comedy BROOKLYN NINE-NINE returns for a second season, centering on a talented-but-carefree detective (Golden Globe winner Andy Samberg), a by-the-book police captain (Emmy Award nominee Andre Braugher) and their precinct colleagues. BROOKLYN NINE-NINE is not really about the job - it’s about the men and women behind the badge.

From Emmy Award-winning writer/producers of "Parks and Recreation" and starring Emmy Award winners Andy Samberg and Andre Braugher, BROOKLYN NINE-NINE is a single-camera workplace comedy about what happens when a hotshot detective (Samberg) gets a new Captain (Braugher) with a lot to prove.

Brooklyn's finest and funniest police officers make their triumphant return in the sixth season of the critically-acclaimed and fan-adored comedy series from Executive Producers Michael Schur and Dan Goor. Season 6 picks up right where the Season 5 cliffhanger finale left off, with Captain Holt (Andre Braugher) revealing whether or not he got the commissioner job. This season also features the honeymoon of newlyweds Jake (Andy Samberg) and Amy (Melissa Fumero), the bittersweet departure of Gina (Chelsea Peretti), a flashback to the glory days of Hitchcock (Dirk Blocker) and Scully (Joel McKinnon Miller), and so much more!

"Brooklyn Nine-Nine" follows the exploits of hilarious Det. Jake Peralta (Andy Samberg) and his diverse, lovable colleagues as they police the NYPD's 99th Precinct. After Capt. Raymond Holt's (Andre Braugher) demotion to patrolman at the end of season six, the squad's world is turned upside down. Rounding out the ensemble is the newly promoted Lt. Terry Jeffords (Terry Crews), a muscle-bound human mountain who loves nothing more than his three little daughters, except for a fresh carton of full-fat yogurt. The man loves yogurt. Reporting to him is Sgt. Amy Santiago (Melissa Fumero), a consummate rule follower with a weak spot for dork dancing and her husband, Jake. The other detectives in the squad include Jake's best friend and human puppy dog, Det. Charles Boyle (Joe Lo Truglio), and the incredibly secretive, tough-as-nails Det. Rosa Diaz (Stephanie Beatriz). Also part of the Nine-Nine are veteran officers Det. Scully (Joel McKinnon Miller) and Det. Hitchcock (Dirk Blocker), whose only skill as police officers are their ability to make a passable pot of coffee.

Detective Jake Peralta, Captain Raymond Holt and the rest of the beloved squad are back for one last ride – full of hilarious antics, returning friends, memorable moments and of course… the incomparable Cheddar. Get ready to celebrate a true comedy classic and say goodbye like only the fans can. Nine-Nine forever!

Lavell Crawford explains why Black History Month should be an excuse to get drunk, and how mixed messages from his mom have affected his weight in this half-hour stand-up special.

With a mixture of political sound bites, still photos and schmaltzy 80's power ballads, comedian John Oliver takes a look at the moments that have defined our soul-sucking decade. From his take on the evolution controversy to imperialism to global warming, watching this extended and uncensored stand-up special may be your only way of surviving these Terrifying Times.

Go behind the scenes at the Roast promo shoot with Roast Master General Jeff Ross as he makes Justin's worst nightmares come true.

It’s that time again. The end of the world is approaching and Christopher Titus can read the writing on the wall. Just about everything is a sign of worse things to come -- Prince Charles seems to have married Mick Jagger, we have to re-conquer the moon, and even the animal kingdom is so pissed off that they have mad cows coming after us. Christopher Titus tells us how bad we all really have it in this one-hour stand-up special.

Impressionist Frank Caliendo shows off his multiple personalities, from John Madden to George Bush, in this half-hour stand-up special.

In the wake of Jen's indictment, the ladies attempt to get to the bottom of the rumors about Mary. Meredith questions her chance encounter with Camer...

Logan's incapacitation sets off a heated succession debate among his children, as the Board rushes to inform the media about leadership contingencies ...

Series Premiere. On his 80th birthday, media magnate Logan Roy, whose imminent retirement was thought to be a given, shocks his family by announcing h...

Mia and Candiace hash out their differences, and Mia gets called out for her social media misdemeanors. Karen and Gizelle go toe-to-toe and their neve...