When you talk to the other side, you never know who will be listening...

How do people think this movie is so amazing? I thought the acting was terrible, the story was boring, the twist was stupid and I wanted to punch thatobnoxious little girl in her stupid overly-stretched-open mouth and white eyes. I apologized to my friends for making them go with me to see this in theaters. Move on, there's MUCH better horror out there.

Not only was this an improvement from the first movie, but it’s also an extremely scary and affecting movie on its own!

This little girl wasn’t possess. Every child acts like this. This is a documentary.

Nickiandariisqueenssss - I don't get it

I don't get it, I am shocked that people found this movie good. Only thing I liked that it was a twist at the end.

Poor excuse for a "horror" movie

wasn't so great but fun to watch and pass time

First of all, do NOT associate this movie with Ouji (2014) because that was a s#!t stain. Anyway, friegtening, quality acting, actually has a plot, great acting, and surprisingly scary. Even if you have a refined taste in the horror industry, this one is still pleasently pleasing.

this was the worst horror movie I've ever seen. Anyone who says this is scary is either a baby or lying. Don't waste your money like I did. I wish I could give this zero stars

Essentially an evil Nazi once owned the house and he tortured and killed people there while he practiced the occult. Now the spirits haunting the place are disturbed and often look like black aliens with glowing orb eyes. Or maybe they look like something from Lord of the Rings; the point is they are not as scary as you hope they would be. The silliest and non scary moment that was supposed to be scary, was when a hanged boy attached to a rope or sheet, that now turns into a bungee cord, picks up one sister and throws her on the stairs. This brought me back to reality and away from the story pretty quickly. This movie had potential, and I was willing to like it…. Sadly I will encourage you to try something else.

This movie lacks any originality. At a painstakingly slow pace, the first hour tries to build something. Then, like a child trying to inflate a balloon that slips out of its fingers, the story quickly deflates. The plot, the ending, it is just laughable. If Apple offered refunds for this rental, I would be asking for my money back.

This movie was pure, unadulterated garbage. Not scary at all, with a weak ending. I'd rather watch paint dry, then to watch this snooze fest again.👎🏾

Before Our Kingdom - Meh...

This movie was not good. I’m very confused as to why this has decent reviews. I never write reviews for really anything but this just kind of annoyed me. It was “scary" at a few moments but the CGI was crap and the story was just plain old boring. I kept checking the time to see how much of the movie was left. The Conjuring movies are wonderful. This is like the ugly ugly step sister to that. A very boring ugly step sister. Do not waste money on this movie. Wait until it shows up on Netflix or something. Not worth even one dollar.

Bad acting. They looked like they bumped their head in scenes where they should have been terrified. Pretty bad story too.

Loved this... first obsticle would be the setting, set in the late 60's (the young girl would be exactly my age) they got the time period perfect, including the way the young girls looked, especially the youngest. Unlike today's manicured, fashioned, professional hair styled kids, she dressed as per the time period. Great script. Great acting. Great effects. What more could you want. Highly entertaining!

I absolutely love this movie! Me and my friend watched this at night and we were so scared! Definitely would recommend if you want a good horror movie. The ending is so surprising! I only wish they would lower the buying price, but I understand since it's such a great movie. 1000/10 definitely worth $15!!

K.M. Ensign - a creepy homage with its own ideas

The movie pays tribute to horror films of 70s and early 80s, but of course the skillfully restrained VFX make it that much better. There are some decent chills and the depth of the story line stays fixed despite the many tangents that rush in to propel the story and fix gaps. Keeping a keen eye amps up the creepiness. I wish it ended a bit differently, but given the nature of the entities and circumstances, it made sense.

While this version was much better than the first, I still wouldn't label this product horror. There are some decent tense Filled moments but that's about it.

Reviews I read said really scary...not so much. I just watched the possession of Michael king and it scared the crap out of me. This gets a thumbs down n scary...soooo disappointed!

I was hoping this movie was what others claimed was great, but it was not. I can't believe I wasted money on this.

Random demonic spirits, tedious and silly dialogue and one-dimensional characters, this was a tough one to endure to the end.

I've seen scarier movies than this one... the trailer showed more of the intense parts and I was not amused or did not jump at the cliche parts, but I give it props for trying to make it real. The Conjuring 1&2 is scarier and made me scream.

These people should go to an insane asylum :) Who doesn't call the cops after they see a dead body? Lol. To jail they will go!

I honestly saw the trailers and thought this was going to be another horror sequel fail but I was proved wrong when I went to see it.This movie was outstanding and way better than it's prequel.It had heart pounding moments along with a few scares.I honestly would see this movie again and recommend it to everyone who is a horror movie fan.

Seamonkeydown - Way better than the first

Great Movie I love It

I've been watching horrors movies sense I was 5 now I'm 12, this is a great movie and really scary but 5-8 I recommend watch this with a parent

Saw this movie on me and my girlfriends first date. Great movie. Head us on edge the whole time

"Ouija: Origin of Evil" is the film we needed after the box office flip that is Ouija (2014). The overall acting and plot line are great, which is a bonus since horror movies today commonly have a lack of those things. High production value was clearly shown throughout. But of course, and most importantly, it was scary. Well, that's an understatement. IT WAS TERRIFYING. Origin of Evil is one of the few horror films that will make you want to sleep with the lights on. Great flick. 10/10

Just watched it.AMAZING!!!!!!!!!LOVE IT!!!!!I didn't not think it was going to end like that,it wasn't a totally happy ending but still.I recommend this movie

I normally can sit through any horror movie and not jump much if any. But when I went to see this movie I went alone, after seeing it my sister wanted to see it. When I left the theater I called her and told her it scared me which changed her mind. If you think nothing can scare you, I would say watch this movie alone you just might change your mind.

I haven’t watched the movie YET but the trailer blew me away! I’m so excited to watch this great film!

2 stars because the movie wasn't senselessly stupid. And, 2 stars because the movie just wasn't good. In this case, audience reviews are correct and critics aren't. Critics want you to think the film's poor popular reception had something to do with "modern audiences" unable to take the kind of bleak picture the film paints. This has nothing to do with modern audiences. The film is: not that scary; sets audiences up nicely; then utterly shatters their expectations for where the film is going. They wanted the ending to connect to the first Ouija film, an equally bad movie. But, really, why build this film in relation to the first, if the first sucked? In connecting the dots to the first film, Ouija: Origin of Evil also suffered. Avoid.

Finally watching Ouija: Origin of Evil 😅 I mean, we did a whole episode about Ouija Boards, might as well watch th…

@goaterhead Yeah, I loved both Conjuring movies. Last Exorcism was good too, Exorcism of Emily Rose was good, but m…

Time and time again that sequels always fall behind the originals. I hope this one breaks the mold like The Purge,…

@JuddApatow (1/2) Depends on the flavor of horror. Comedy/meta: Cabin in the Woods, Scream Possession/exorcism: Th… 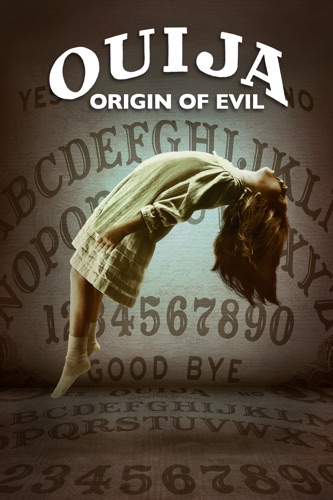