Marshall is based on the incredible true story of future Supreme Court Justice Thurgood Marshall and one of the landmark cases of his life. It follows the young lawyer (Chadwick Boseman) to conservative Connecticut to defend a black chauffeur (Sterling K. Brown) charged with sexual assault and attempted murder of his white socialite employer (Kate Hudson). Muzzled by a segregationist court, Marshall partners with a courageous young Jewish lawyer (Josh Gad) and together they mount the defense in an environment of racism and anti-Semitism. Thurgood Marshall, the first African-American Supreme Court Justice, battles through one of his career-defining cases. Marshall Wiki

Justice has a name...

Acting and directing were all too bad. The story itself, when you enter the right man and the Rev Martin Luther King ,Marshall you have a story that is not just a victory,quote from the movie, Ironic these quotes and how to knock a bigot down is to crush the whole house. Think about that and which house he was talking about. Josh Gad did a great job as usual, never given the credit even as his character in the movie,he was used like a typical gruntman with standing ovation that the real Marshall would not have treated as the mouth of moses.A great story in history if you get out the right text book that keeps changing in the school systerms.

Corporate America using the death of an individual to cash in one last time.

Worthy subject, low-wattage conception and writing. Should be in the .99 weekly special bin.

A truly unfortunate film, about a remarkable man. Poor directing and even the acting was not believable. Just so unfortunate.

Was surprised when it didn’t get a best picture nomination. I loved the feel of this film and the way the plot unfolded.

This movie was entertaining and had some truth in it but should most definitely be considered a work of historical fiction.

I really enjoyed this and consider it a must watch. Yep, rent it but be sober.

This film gives light to a world that’s dim in all shades. It was moving a inspiring then and is moving and inspiring now.

pholly - A story of a real person

Full of exaggeration and lies.

Gregoire2125 - Insult to his legacy

This could be characterized as a smear to his great works. What an insult to this great mans legacy

Imagination - Sometimes a story is just that!

Is it a good movie? yes. Is it a great movie? maybe. Depends on perspective. We are in an age where everyone seems to be looking for a hero or two to guide them. Justice Marshal was the right man at the right time. How he achieved the things he did is history, how he got there is interesting but only of some importance! So sit back and enjoy a very good story.

Realblog - Its about the struggles and accomplishments!!!

This is a story about America during its worst moments, and the journey of a legend who fought against this nation's crimes. Regardless of how you recognize his accomplishments, just recognize them, and watch this film with the understanding that he sought change and equality!

If you have no idea what a film is supposed to be, let someone else tell this story the right way.

spenli2 - A poor story about a great man

Justice Marshall was a great man, lawyer, and judge. His life and the beliefs he held and acted upon helped the country finds its way into the light during a dark time. Unfortunately Hollywood realizes that type of story might not sell a lot of tickets. Gone are the days of making biopic films about legends that keep the story faithful to the truth. Thurgood Marshall was not a man who was looking to get into bar fights or cause problems, but was someone who wanted solve problems with words, not his fists or cheap one liners. This movie is a shameful representation of a great man. Also the story fails to take note of the facts of this case this movie portrays. Hollywood, please find another story to spice up with fiction, and stop drastically rewriting history in such a pitiful way to sell tickets and turn a buck. If you want to see a great movie about Justice Marshall see Separate But Equal with Sidney Poitier, and avoid this train wreck of a film. 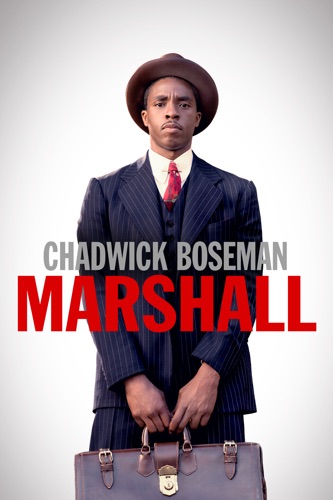