The Secret Life of Pets 2 Summary and Synopsis

From Universal Pictures and Illumination Entertainment comes the highly-anticipated follow-up to "The Secret Life of Pets," the blockbuster animated comedy about the lives pets lead after their human counterparts leave the home each day. "The Secret Life of Pets 2" is directed by Chris Renaud ("Despicable Me 2," "The Secret Life of Pets"). Max the terrier must cope with some major life changes when his owner gets married and has a baby. When the family takes a trip to the countryside, nervous Max has numerous run-ins with canine-intolerant cows, hostile foxes and a scary turkey. Luckily for Max, he soon catches a break when he meets Rooster, a gruff farm dog who tries to cure the lovable pooch of his neuroses. The Secret Life of Pets 2 Wiki

They still have their secrets...

I love the tiger I Felt so bad for the tiger

This is one of my favorite movies!!!

This is such a good movie it has a great moral and has many great heart felt scenes that almost made me cry they were so good and I never come close to crying on ANY movie! 5 stars I’ll watch it over and over again!

I saw this on one of my famous 3-day weekends in the very beginning of October. It was a wonderful movie, and my favorite characters from this one is daisy and rooster. It can teach a lesson about worrying about things. Just watch it yourself. $10 wont hurt you.

It was the best movie u will ever see! Also it was a very cute and funny movie!

This one is better the the first

This movie how so ever did not entertain me

I thought this was Secret Life of Pets 2. Not The Incredibles. Still good anyway.

BabyBoomerWriter - Boring, Too Shallow a Storyline to Adults

The first movie in the series was so much better, it set a high bar. This may have appealed to children, but it was so bad, we turned it off before 30 minutes had passed. The pace was slow and meandering, the characters of the adults had no depth and our concensus was: Iit's was overpriced at Apple's $6 (rental fee).

This was one of the best movies I’ve ever seen.gg

I was watching the movie with 48 hours left to rent it and it says it expired and I just bought it!!!🤬

Skaggs1407 - Not great, but definitely an improvement over its predecessor.

Let me start off by saying that I did NOT like the first "Secret Life of Pets" movie at all. It was unfunny, mean-spirited, the characters were really irritating and unlikeable, the story was basically a ripoff of "Toy Story," and the third act was extremely over the top. Sure the animation was nice and that's really all that movie had going for it. Other than that, it was just a complete waste of a movie. It's easily tied with "Minions" as Illumination's worst movie to date in my opinion. Needless to say, I had no desire to watch this sequel. I actually skipped it while it was in theaters. But since I ended up watching it today, I gotta say I was pleasantly surprised by how decent this one turned out. Now it's nothing spectacular by any stretch of the imagination, but it's definitely much better than the first one. The characters seemed more likeable this time around, the new characters were surprisingly enjoyable (especially Harrison Ford's character), there were moments that were truly funny, and it had a great message as well. However, there's really no story here. It mostly feels like three shorts crammed into one movie and I personally believe one of the three plot lines could have easily been removed. As a result, the movie can't help but feel a little more episodic at times rather than feeling an actual movie. Also, while there are funny moments (more than in the first one for sure), most of the comedy is hit or miss. Not all of the humor lands and just feels simple and the jokes even fall flat at times. Like most movies from Illumination, it's also predictable and doesn't offer very many surprises and that's starting to get old now. I'm still hopeful for the Super Mario movie and they better take more risks on that and move on from making movies with the same formula. That being said, this is still a much better movie than what I was anticipating. Is it something I'll ever watch again? Probably not, but it's still mildly entertaining and a decent movie to watch to pass the time. Kids will definitely enjoy it. As for adults, it'll only depend on their taste.

I just loved this movie. If you are an animal lover or have pets you will understand all the jokes. Definitely a great family movie. 👍🏼👍🏼

This movie is boring. Not even worth using to distract your children.

Hey all Do you love The secret life of pets will... you come and buy it at Walmart target Dollar tree everywhere else by

lakazanda - I love the movie

fusia pink - This is not the best it could have been

The trailer makes this movie 100% better than it actually is.In the trailer the plot makes a lot of sense then it does in the movie it self . THE rushed the plot soooooooo much ,there we’re just to many scenes at once .I was so excited to watch the movie it was a let down.

wonderjh - The first one was better

the story was disconnected. I still dont know what the baby tiger had to do with the story. Hated the typical gangster action at the end. The story didn’t need rap music to make it cool or "inclusive" its a cartoon... The first one was much better. wait for HBO or Netflix! Save the $6 dollars.

Feels very forced compared to the first movie, the star-studded cast for the voices sounds like they reading their lines with guns to their heads

It's an amazing family movie i watch it in my life also i want to thanks actors and everyone worked on this movie makes me happy every second when i watching this :)

Not as good as SLoP 1

If u thought this movie was bad then y did u watch it in the first place and did u watch the whole thing because of you did,you clearly liked it.And I liked the movie although it was not that funny or not the best🤗

Watched with my little boys and we loved it

Why no Dolby Atmos?!

Good for younger kids, not for me... Better than the first one though... If you liked the first one, you’ll probably like this one...

Since there was a lot of stuff going on at a time the Movie felt really really short.

My kids love these movies. I really hope they make a 3rd

kit$$ - more action packed than the first one my new favorite

I love this movie! It’s so good! However, the 1st movie is better since there is zero coherent storyline and the movie feels rushed. It’s great besides that tho! And WATCH THE POST CREDIT SCENE WITH SNOWBALL SINGING PANDA ITS 1 OF THE FUNNIEST THINGS IVE WITNESSED IN MY LIFE I WAS DYING😂😂😂😂😂😂

The script is VERY low budget style ! They didn't know what to do as a sequel...and it shows. For a 5 year old, it will be ok !

Better than the first one, but it has to many story lines. 👎🏻

Tally puffs of the world - Not good

Not very good don’t buy it

awesomemoviereviewer - What a huge surprise

All I have to say is that this movie was really good and I enjoyed watching it.

I liked the movie! It was very funny.😀

ZDruads in france - Okkkkkk I need to pay for it

Okkkkkkk i need to pay for it

My son and I, watched in the theater. Love this movie and I can’t wait for purchase 😍😍😍😁😁❤️❤️❤️

Superhero145 - It been a great year for animated sequels

Since the beginning of the years sequel been a mix review but this was really good I loved the first movie and I thought this was better I recommend it to anyone who loved the first film it doesn’t disappoint it a must buy!!!!!

I’m 22 and I thought it was hilarious lol. Go with some friends who aren’t lame.

It was an awesome movie. I would see it again.

It was a funny movie but it didn’t have a story. They multiple things going on at once. They had more portantaul. I would recommend waiting to watch when it comes to Redbox. Not worth buying.

It was better that the 1st. Can’t get over the P word (you have been warned). Like three funny parts then just, blah. It was just eh

I watched this in The Drive In Theatres on Opening Weekend, and I realized, what’s with the live action scene. Other than that, it’s very awesome

I went to see this movie with my friends. I though that this movie would be decent. My friends had though it would be superior to the original movie. It turned out to be a snobby bore fest of the movie switching to 1 viable plot and 2 non-viable plots. The pacing here is horrible and feels rushed. By the time we finished watching, we hated this movie. Make sure to never watch this movie ever and if their is a Secret Life of Pets 3, don’t watch it ever. 😶

I was disappointed how the movie turned out. Wait to rent it don’t by it

And I just saw the movie 2hours Do you know the first secret life of pets was good and they return in four years let’s find out. The story is not like the first one but it has a villain like after the events of the first take a life of pets Max has a baby name Liam and the girl met up with a man and then they got married and Max the little baby and the Duke went on a road trip they went to see The mom’s uncle. The animation Animation is really good for a Blue Ray style And the animations is……Better then despicable me franchise. The characters Max is the main.character Roster is the Captain America‘s teacher Rip-off.Snowball is the superman Rip-off. Gidget is the cute little dog. Norman is The little guy that Runs everywhere. Katie is Max’s owner. Buddy is slinky Rip-off from toy story. Duke The big brown dog and he is the Chewbacca Rip-off. Pops is the dog with the wheelchair like Charles Xavier from X-Men yeah he is the Charles Xavier Rip-off. Sweet pea is the Little small bird and he is the falcon Rip-off (Avengers endgame my favorite movie of 2019). Mel is the funny dog. The secret life of pets 2 is the movie that you need to see it so funny and whoever is Reading📄 my comments if anyone asks yes it gets the movie of like that and easy Gevin😃👍🏻 it really is that funny. The story 7/10 The animation 10/10 The characters 10/10😃👍🏻………… and maybe I like The secret life of pets 1 and 2 Better than………(Zootopia do you know my favorite animated film of 2016)

G unit Fazz - Missing the MAIN character from the original

Really want to see it

Yorick Delano - This Needs to Stop

Something is telling me if we don't expect better from these movies a new dark age for animation is surely encroaching, and Illumination will be the one for whom the bell tolls.

The Secret Life of Pets 2 Posters 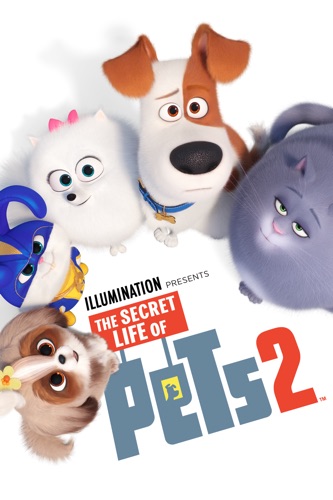