Dora and the Lost City of Gold Summary and Synopsis

Having spent most of her life exploring the jungle with her parents, nothing could prepare Dora (Isabela Moner) for her biggest challenge yet – High School. When her parents mysteriously disappear while searching for the Lost City of Gold, Dora must swing into action and lead a group of ill-equipped high schoolers on a wild quest to save them. Hold on for a high stakes mission as Dora and her new friends navigate the jungle, outrun treasure hunters and solve ancient puzzles to unlock the mystery of the fabled city. Grab your friends and family and join Dora on this fun-filled adventure of a lifetime! Dora, a girl who has spent most of her life exploring the jungle with her parents, now must navigate her most dangerous adventure yet: high school. Always the explorer, Dora quickly finds herself leading Boots (her best friend, a monkey), Diego, and a rag tag group of teens on an adventure to save her parents and solve the impossible mystery behind a lost Inca civilization. Dora and the Lost City of Gold Wiki

Dora and the Lost City of Gold Movie Trailer

Explorer is her middle name...

Dora and the Lost City of Gold Comments & Critics

Dora and the Lost City of Gold Movie Reviews

THE BIG ZAN - Not much has changed

Wherever is that guy who said that movie was childish. There were only two good parts. ACTUALLY, none. You know, this is just as childish as the original TV show. In fact, the title sequence looks terrible. It’s main cover title is literally bold and stuff, and the trailers seem so f*cking adventurous , but it really isn’t. Also, this movie is mucked up into friendship and teamwork, and sometimes teamwork doesn’t solve anything. Not anymore, really. In the first 20 centuries and the early part of the 21st Century it helped. But why am I still typing. And I thought one of the “good guys” we’re good. No! I only like that there aren’t too much talking animals,it is way longer than the original movies, and we know much more about Dora. Conclusion? TERRIBLE MOVIE

It was ok like good. Not outstanding. Not terrible. Not the best. That’s all their is to say. AVENGERSROCKSBOI

I was never a fan of Dora, and neither was my daughter. That said, we went to see this because there was nothing else, and I’m not purchasing it because of how much it made us laugh. Well done!

This is better than Foodfight.

honey badger 11 - NMBER 5 Dora the lost city of Gold! THE REASON WHY I HATE

What dub languages can u watch this movie in

Its a cute film, for what it is, it's decently entertaining.

I expected this film to be absolutely garbage with no good quality but it suprised me. IT is not a good movie but it’s not a BAD movie. It’s just eh

wildcat the first - For babies in diapers

Listen! Don’t rent or buy if you don’t want to cry and wear diapers.

Another reason for, 100 reasons to blow my brains out 😐

I think the movie was good.

The movie is Great and Amazing

If your looking for a fun family movie. This is it.

Better than I thought

Apparently I should like this movie, and Isabela Moner is one of my favorite teen actresses.❤️

Mutismutis - Any movie including Eugenio Derbez as cast, is BS

It’s a live version of the cartoon, so if you and your kids love the cartoon, you’ll love this movie. Guess I thought the live version would be a little smarter. Tried watching on plane but even though it was free I stopped at 20 min, just couldn’t watch it because it so dumb. Can’t decide whether it’s just written so poorly or maybe it was written by the same cartoon writers, anyhow, it should have been made the same length as the cartoon which is 30 min. Maybe then it works. Recommend that you rent at 99 cents but don’t waste your money to buy it.

Silly and funny some parts were silly and some parts were a little bit scary but most was adventures like when it makes me get interested to it more my kids loved they even said can we watch it again !! IT WAS AMAZING

If you had kids that watched this growing up you will find your curiosity wandering about this.. all you need is a good “brownie “ and let the laughs begin!!

love how it incorporated the cartoon in with the real life, action-packed movie!

Cute and silly, some of the parts made my husband and I laugh out loud. Most engaging story line? No but everyone in our family enjoyed it!

I love the movie, my kids were entertained and it showed them that all they need to do is be themselves no matter what. We will be watching it again!

I went in with no adult expectation, and fell in love with Dora again! I love it when she was poisoned!! Can you say delicioso!

Never should have been made

This film was really good and extremely funny and while I was watching the movie, there were most parts of the movie that gave me flashbacks when I used to watch Dora all the time when I was little 😂😂😂 but still the movie was great!

It was a lot better then I expected. A good movie for the kids

I truly enjoyed this film! My girls loved it and can’t wait to buy it.

This movie was so horrible. Why was it horrible? Well I’ll tell you why. This movie is a massive ripoff of The Road to El Dorado, Tomb Raider, and Indiana Jones, Which are way better than this crap. In a scene, Dora’s dad started being annoying. Dora is retarded. She sings annoying songs all the time. Boots looks like The Grinch has been smoking crack for 85 years after he painted himself gray. Diego looks like Sid Phillips and Tim Goodman. Randy is a coward. Swiper is an idiot. The only characters I like in this movie are Sammy and Alejandro Gutierrez. This movie was so horrible that Redstone336 Mario909 already made a rant on it before he even saw it in theatres. I hope this movie doesn’t make it to box office, get a sequel, or comes out on Netflix, Hulu, or Starz. And why is this movie rated PG. This movie should’ve been Rated G, because Dora the Explorer is TV-Y, Not PG. And Nick Jr. movies can only be rated G. Not PG. And I swear to god, if even one person disrespects my opinion, I’m gonna lose it

Six Dollar Burger - I really wanted to like it, but...

I used to watch the original Dora with my kids. The idea of this movie sounded cool. The actress who plays Dora was amazing! They could not have found a better Dora. Sadly, the adults in this movie try to be funny and fail, badly. The script did not include classic Dora things like saying, "Swiper No Swiping" 3 times to stop him, or Dora repeating what the plan on the map says to do, (trail... swamp..,.tall mountain!). Why? If you are going to make a parody of a show, use the material provided by the show.

Movie lover 23567 - A little childish but still a great time

FINALLY ROTTEN TOMATOES GETS ONE RIGHT! Where to start, first Boots and Swiper looked AWESOME!!! Second, a little predictable. Third, Isabella Moner was an EXCELLENT Dora. Fourth, the flower part was weird. Fifth... there is no fifth. Just a great movie. I thought this was going to be a disaster beyond porptions, but a great family film with hilarious comedy.

Masciana - Dora and the lost city of Gold

this movie was amazing.

It was actually a good movie lol

It was awesome and very funny for good times

Seriously, don’t ruin the chances of a movie’s success by asking for attention. Also, I saw this movie with my friends as a joke and it was actually pretty funny. Watch if you feel like making fun of something.

I understand why people love this film so much! This is a big disappointment and a monster train wreck! Maybe when this film comes out on Netflix, I’ll give it a go.

It is really really good

Nick Timbit - This movie is not great

This movie is not great do not recommend this movie

Well, really low budget..actors are really on the low bracket of acting....but could be ok for kids from 8 to 10 maybe !

Icantbelieveitsnot.... - Can u say severe neurotoxicity?

I’m giving it 5 stars. They made fun of their own product in a way that was enjoyable with just enough winks and nods for those parents ( and kids if they even remembered what they had seen when younger ) who had to suffer through this tv show. It shows a smart loaner kid who talks to herself and has no friends(sorry boots and Golden tree frog) with no sense of space or distance... who turns out to have enough belief in herself to win over her ‘just’ blending in cousin and classmates. It shows that individuality can be good and still help others to believe in themselves and make them stronger. Unlike most teenagers afraid to take a stand. What I’m trying to say is.... I didn’t hate it. I even laughed.... a few times.... out loud.

Dora the Explorer was well past my time, but I was easily able to enjoy this with my own kid!

As an adult I enjoyed this film with my family it’s not for all but we enjoyed it.

This movie is grabage and crash Grab

This is based on a show for BABIES!

Join me to get @Listia's new $XNK #cryptocurrency for free! Use code "CGQWDG" for an extra 100 XNK. Just got this w…

@ nickelodeon spare dora and the lost city of gold sequel? 🥺🤲🏽

@AaronTheH Rather, Dora and the Lost City of Gold,to be exact.

Done watching Dora and the Lost City of Gold. Gosh! That was a good one. I've been laughing throughout the movie an…

NW: Dora And The Lost City Of Gold

So, DORA AND THE LOST CITY OF GOLD.... The Way I See It, If you’re gonna make movie franchise extensions/reboots/w…

Dora and the Lost City of Gold Images & Pictures

Dora and the Lost City of Gold Posters

based on tv series 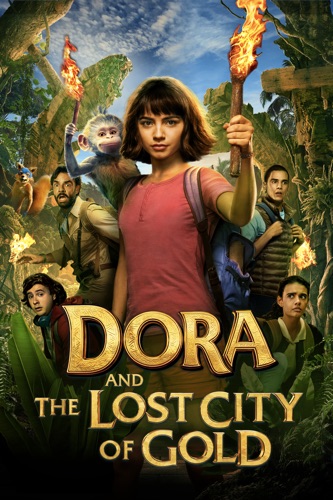