Luce is a smart psychological thriller that will leave audiences breathless. An all-star high school athlete and accomplished debater, Luce (Kelvin Harrison Jr.) is a poster boy for the new American Dream - as are his parents (Naomi Watts and Tim Roth), who adopted him from a war-torn country a decade earlier. When Luce's teacher (Octavia Spencer) makes a shocking discovery in his locker, Luce's stellar reputation is called into question. But is he really at fault, or is Ms. Wilson preying on dangerous stereotypes? Stacked with amazing performances, and adapted from JC Lee's acclaimed play, director Julius Onah has created an intense, multi-layered and deeply entertaining look at identity in today's America. A star athlete and top student, Luce's idealized image is challenged by one of his teachers when his unsettling views on political violence come to light, putting a strain on family bonds while igniting intense debates on race and identity. Luce Wiki

The truth has many faces..

I think the director wanted to try and make Luce look like the protagonist right from the start especially cause he’s the main character.. but it didn’t work. I’ll give a thumbs up for Octavius though obviously she’s great in any movie.

A waste of my two hours!!! Makes no sense what so ever!!!

Not a typical Hollywood film - in a good way. Wonderful Octavia Spencer as usual, too

It tried to ‘get there’. I felt I’d wasted my time after I’d ended it. But then in retrospect I think it’s a good movie. It’s very truthful ~

BorkNilsen - I want my money back.

It seems like the ending of this movie is missing. You know, the part where all threads you've just spent the last hour and a half following _should_ end up somewhere. You know, the what, how and why's of a thriller. This is not a thriller, but more like an unsatisfying, pointless drama.

This movie puts the viewer in a small jury box, and it only gives circumstantial evidence of wrongdoing but no real motive, and no character insights; the movie doesn’t and probably can’t penetrate the “luminous” veneer of the titular character, and so it leaves you in the middle of a contrived choice. The choice “whose side are you on?” is a set-up, prompting the viewer to fall for it. Some of the scenes are great, but they don’t carry the movie, and the circumstantial contrivance is truly annoying.

A movie about a teenager doing anything to prevent a s-x assault from coming to light. American psycho meets Steubenville High school , that’s Luce.

How this has a 91% Rotten Tomatoes rating is beyond me. This movie is horrible.

Dumb movie with no real plot or understanding or ending. Just this kid who we still don’t know about other than a dumb face he has at the end.

Meg-swizzle - This movie is not good or thrilling in any nature.

I don’t even want to give it one star. This film is to highly rated. Snore fest through the whole movie kept for waiting for it to get good... never did. For a movie that calls it self a psychological thriller, it did nothing but bore me. Don’t listen to these reviews. Do you self a favor and don’t watch

I watch a lot of movies and really tried to give this movie a chance. I get what it was trying to do but they didn’t get it done. Disappointing given the interesting premise.

Great movie. Worth the rent. Strong acting. Something about it left me hanging which I just personally struggle with film. Luce rhymes with Juice. Can’t help but think this is OJ through the whole thing.

Jbkohl - This is why indie movies exist

This is a staggeringly accomplished film, one that's unafraid to dive into the darkest, most difficult parts of American life. The kind of movie that gives you hope for American indpendent film. Bravo!

If zero stars was allowed that’s what I would give. Acting was great especially by Octavia as always. Terrible ending!

I love the acting!! The story was well written and believable. I can see if you change a few things how this could happen in real life. I am happy the movie is finally available on iTunes😊

With an uninspiring ending. I would rent it again, but I am thankful I didn't buy it. Def worth watching, but it left most unsaid...

Tightly written, unpredictable, thought-provoking and timely thriller/drama about a adopted suburban high school star senior student/athlete who has risen above his upbringing in a Africa...or has he? This film had us talking for days afterward. This is awards caliber stuff that simply was never promoted in its inexplicably limited theater run. The screenplay was engaging and unpredictable, the stark and evocative cinematography was done to perfection, and we were particularly struck by the absolutely stellar performances all around: parents Naomi Watts and Tim Roth (who previously paired in Funny Games), Kelvin Harrison Jr. as Luce, teacher Octavia Spencer (as good as ever) and stunningly realistic supporting cast members. HIGHLY recommended.

Brings reflection to us all....

@Haru_AID: Why they changed it omg HUG YOU is better than HUG U 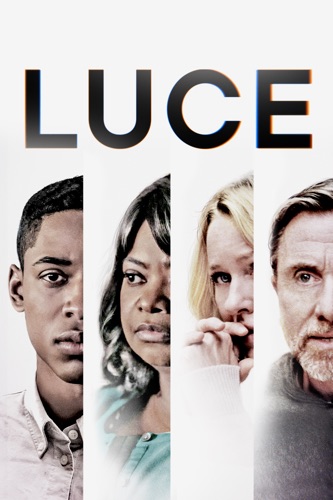