Based on world-shaking true events, Keira Knightley stars in the untold story of British intelligence specialist Katharine Gun. One day in 2003, and the lead up to the Iraq War, Gun receives a memo with a shocking directive: collect blackmail worthy information on UN council members to force the vote for the invasion of Iraq. Unable to stand by and watch the world be rushed into an illegal war, Gun makes the gut-wrenching decision to defy her government and leak the memo to the press. So begins an explosive chain of events that will ignite an international firestorm, expose a vast political conspiracy, and put Gun and her family directly in harm’s way. The true story of British intelligence whistleblower Katharine Gun who—prior to the 2003 Iraq invasion—leaked a top-secret NSA memo exposing a joint US-UK illegal spying operation against members of the UN Security Council. The memo proposed blackmailing member states into voting for war. Official Secrets Wiki

Nothing is more dangerous than the truth..

What do you think Official Secrets movie? Can you share your thoughts with other peoples?

Bravo!! This is a timely movie. It is well done. The acting is excellent. The pacing is great. The story is important and must be shared. In an age of perpetual, wasteful warfare, this movie shines a light on the lies and fabrications deployed on the mass public in order to sell warfare like any other consumer product. Watch it, and learn. The movie treats the real story of Katharine Gun with great respect.

Kind of went under the radar. This is a pretty good movie

bigal17 - Hollywood gets it

Rich Hollywood elites are so in touch with regular, everyday folks like me. I hope they continue to make wonderful movies like this and tell us how to think. It has been working so well for them since 2016, I hope they keep it up.

We had high expectations for this film, and we weren’t disappointed!

Furutan1 - Should be reuired viewing, just the tip of the iceberg

This is only one true story about the sinister goings-on that led to that war. It is not about politics, but known fact. Once Colin Powell learned that the photos and information he was given were false, he resigned as Secretary of State. Others can try to spin it as they will, but the facts were out before going to war and they were substantiated once the war was over. Dishonest informants were paid many thousands of dollars for the information they provided and they had a huge motive to lie. As for the U.S. trying to coerce other countries into supporting the way, this is all absolutely true. And what was the result of the war? We removed Iran's number one enemy - not the US but Saddam's Iraq - and the years of Iran-backed car bombs and suicide bombs in Iraq and elsewhere - things which killed many American soldiers and their allied - were the result of this. Saddam might have been a terrible despot, but at least he kept Iran in check.

A South African writer/director makes a film for a Canadian media company (eOne) with a British cast. Three of the 4 prducers are UK, one, Elizabeth Fowler, is American. It's released in the USA by an American company, based in New York named IFC. Paramount releases it to video. Ahh, that's where Hollywood comes in. Some now suggest that this is an attempt by "Hollywood" to tell us how to think or act. I'd suggest they do a little fact checking first. On themselves. The story is well known in the UK and Europe, not so much in the USA. A women working in British Intelligence, along with many colleagues, was asked to go along with a US plan to deceive both the world and her own nation's people. She refused and became a whistleblower. She was caught and tried. She fought back in every legal manner. The movie is her story, told with as much accuracy as such films usually exhibit (not much - but they get the outline right), and with considerably more skill than such stories are usually told. Kiera Knightley and Ralf Fiennes are superb, as competent as you would expect from two of our time's better actors. I wish there was a way that Fiennes could have had more screen time, as his role makes the film work. That said, I knew the story going into the theatre, as did many in Europe, the UK, and even a few of us here in the USA. That makes the earnest tone of the film a little tired. Aren't we all familiar with the ways in which governments deceive? I suppose those not yet of age in the 1990's may still not know this truism. I certainly hope they'll have it figured out by the time they vote.

Tony Blair should be prosecuted! Based on a true story it was a decent film.

One of the Best Movies of the Year!! Keira Knightley is amazing!

Shame on you NSA Director Hayden, for allowing this farce!

We need the liberals in California to tell us how to think. Please, more movies like this.

More attention should be paid to this moment in history, gets more relevant/important by the day. Love Keira and Ralph Fiennes! 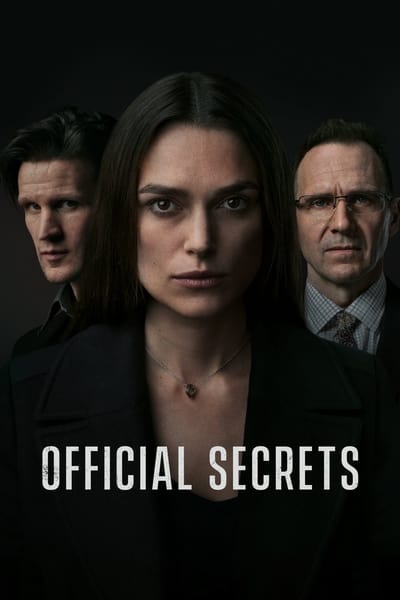