You Should Have Left Summary and Synopsis

In this psychological thriller from Blumhouse Productions and legendary screenwriter David Koepp (Jurassic Park, Mission: Impossible, Panic Room), Kevin Bacon and Amanda Seyfried star as a couple seeking a restful vacation in a remote home in the Welsh countryside. What at first seems like a perfect retreat distorts into a terrifying nightmare when reality begins to unravel, dark episodes from the past resurface, and a sinister force in the house refuses to let them leave. In an effort to repair their relationship, a couple books a vacation in the countryside for themselves and their daughter. What starts as a perfect retreat begins to fall apart as one loses their grip on reality, and a sinister force tries to tear them apart. You Should Have Left Wiki

You Should Have Left Movie Trailer

The house finds you..

You Should Have Left Comments & Critics

You Should Have Left Movie Reviews

absolutely dragging. i actually finished it hoping it was gonna get better. great leads, horrible plot🥴

The acting was good the premise missed the mark. This idea of a movie had some legs if vetted out. It’s almost like they were depending on the acting more than the money invested in rewrites, props and character development. I felt indifferent about the characters and the story wasn’t as good as it could have. Think black swan and invidious. But we got much less than either of those movies.

I feel Blumhouse are the leaders in thrills and frights and in this film you get a couple of those. But I just wished they went deeper with certain storyline’s. Very clever concept though.

This Movie Is Well Worth The Price Tag! Amanda Seyfried Is A Great Actress! Will Definitely Be Buying This When It Becomes Available 🤩

FourUnderFour - Shut up you idiots talking about the prices

Talk about the movie. This movie was ok, It had some good and bad moments. I think it’s worth a watch.

The story is well, the little girl was the best actor out of the 3 of them.

Told me it was a dang joke y’all be chargin 20 dollars to rent a movie! At least ship me some popcorn and twizzlers while I watch! 20 dolla’s and it ain’t even mine to keep??!!

...that the $20 you spend on the rental also goes towards owning it once it gets released for home video, right? I “rented” The Invisible Man and The Hunt, but once they were officially released on-demand, they both appeared in my movie library. Rent now, own later, for $20. Simple as that. Also, this was a decent flick.

skelekdmddnx - it only has low ratings because of the rental price

The movie is so good, it’s worth the rental. Don’t let these reviews fool you because they’re only mad about the rental price, the movie had a solid plot and was much better than these other VOD movies. Rent it you won’t regret it, and if not just wait a month or two for the $6.99 rental when you can purchase the movie

Some of y’all need to realize that Universal actually stated they make more money this way then in theaters. So...... deal with it. The movie is amazing!! Totally gonna buy it when it is available to purchase. Kevin and Amanda were awesome and amazing!!!

Don’t know if it’s a good movie or not, looks interesting. - but people are giving bad reviews because Apple has price of 19.99 to rent and not reviewing the movie at all so evening things out a bit.

Don’t even need to watch to be able to tell this isn’t worth watching...probably just gonna watch stir of echos!

You seriously expect us to pay 20 to rent a movie that’s not even 4k or atmos? Not only will I not pay this crap I’ll just boycott all together. If more people did the same then they’d care.

gjnoto - Stop complaining about the $20 charge

People if you go to the movie theater and buy food and drink you'll pay more then $20.Also with $20 your whole family can watch it for 24-48 hours!!Your complaints are a first world problem!!!

SonoViva - Please review the MOVIE not the price!!

I am really sick of seeing 1-star reviews and thinking a movie is going to be bad only to go to the Reviews section and seeing people complain about the price!! Yes it’s expensive, but don’t gum up the reviews for people who actually want to know how the film in question was.

kirby1058 - Make it available for purchase!

What is with Apple and charging TWENTY DOLLARS to rent movies?!?

@theJeremyVine TBF, she actually indicates to go left, and given she was ahead of you, don’t you think it should ha…

@booooooooooo_l: @EyesOnQ @WayneDupreeShow That is funny because she married into a family that stands for nothing but systemic racism,…

@RabBennett56 Yeah it’s a shame that even out in the sticks you can’t feel confident enough to leave them. I admit…

Review: 'You Should Have Left' explores the psychological weight of guilt and paranoia

@DiscussingFilm: David Koepp on James Mangold directing ‘INDIANA JONES 5’: “If there’s going to be another Indiana Jones movie, I think…

@THR: The filmmaker and frequent Steven Spielberg collaborator looks at beloved lines from #JurassicPark and reflects on the challenges…

@THR: The filmmaker and frequent Steven Spielberg collaborator looks at beloved lines from #JurassicPark and reflects on the challenges…

@GenOttr: I don't really trust adults who say "kids have it too easy/my kid should struggle like me" because that's the whole point in b…

@AC4Congress2020: Do you want the pitch? Here’s the pitch: If you work 8 hours a day you should be able to afford a home, a family and…

I want to rent You Should Have Left but $20 is excessive. I would have seen this (yes, alone) in the theater for $1…

@nytimesarts: Even if you haven’t visited the Welsh haunted house in “You Should Have Left,” you’ve definitely been here before  https:…

You Should Have Left Images & Pictures

You Should Have Left Posters 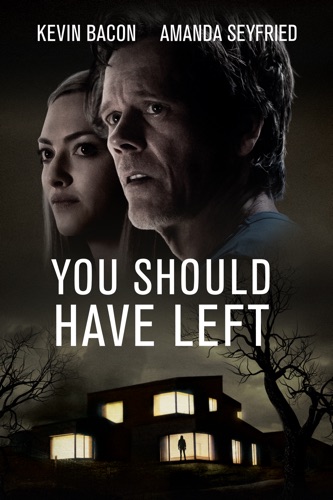