Ethan Hawke stars as iconic inventor Nikola Tesla, fighting an uphill battle to bring his revolutionary electrical system to fruition. Increasingly displeased by the greed of fellow inventor Thomas Edison (Kyle MacLachlan), Tesla forges his own path toward creating the innovative alternate-current motor. In this playful and unconventional biopic director Michael Almereyda (The Experimenter, Marjorie Prime) weaves together a portrait of a rebel ahead of his time through all his controversies, legal battles, entrepreneurial clashes, and romantic interests. The profundity of his electrical mind is unearthed through this rediscovery of the development of electricity in the United States, ultimately posing existential questions about invention, industry, greed, love, and lightning. The story of the Promethean struggles of Nikola Tesla, as he attempts to transcend entrenched technology—including his own previous work—by pioneering a system of wireless energy that would change the world. Tesla Wiki

If you want your life to be more rewarding, you have to change the way you think.

What do you think Tesla movie? Can you share your thoughts with other peoples?

I actually enjoyed the movie except for the low budget cheap backgrounds and definitely didn’t enjoy the ending, which was about really nothing

This was a really great film with an incredibly unique style that made it all the more enjoyable.

If you like artistic, confusing movies then this one is for you! The plot was slow and offered very little historical perspective. I learned more about Tesla surfing the internet. A weird movie...just weird!

Will E. Coyote - Inventive and Entertaining

A very thoughtful way to present a very unique man’s story. The tone of the movie perfectly matches the tone of Tesla’s life. Ethan Hawke and Kyle MacLachlan are terrific. The mixing in of modern technology that Tesla inspired (or outright conceived) in the narrative asides is brilliant. If you don’t know Tesla, then you may not enjoy this movie as much as those that do, but I found it thoroughly entertaining, almost spellbinding.

Hilarious (karaoke) ending to a depressing bland and disjointed movie. I was hoping for a more informative movie about Nicola Tesla, his genius and his sad life, but instead I learned more about Sarah Bernhardt and JP Morgan than I did about Tesla.

A real waste of my time! I was hoping the movie would get better toward the end, but it didn't. Tesla seems to have been a brilliant, but troubled man.

Tony 2Toes - Tesla was so much better than Edison

Edison sold out to rob people to get rich quick and only favor the wealthy elites. TELSA cared for the people and wanted to help them without draining their pockets. Someone that actually CARED for the working class!! F you Edison!

GGallthelove - Tesla sings an 80’s pop song in this movie

I wish I could get my $0.99 back for this rental bc I paid too much. Tesla (Hawke) sings a Tears for Fears song in the movie. Yes, he really does. Horrible green screen scenes too, it had to be done on purpose. I couldn’t rate this with negative stars, so I gave it one, and I’m multiplying by -4 in my review.

I love Nikola Tesla & Ethan Hawke. What could go wrong? Omg I was wrong. Everything! All I’m gonna say is Thomas Edison pulls out a cell phone in a scene. At that point I realized I wasted my time and will never mention this movie again. It wasn’t historically accurate, interesting or worth anyone’s money. Nikola Tesla & Ethan Hawke deserve better then this script. They absolutely dropped the ball on this. If you want to watch a better movie go look up the secret of Nikola Tesla. That was a good movie.

How is it possible to make such a boring movie about this interesting historical individual?

747whaledriver - Quite possibly the worst modern movie ever made

On second thought, it IS the worst movie ever made -- no matter how you slice it. Someone had a little money and a lot of time to waste. You’re better off doing something else much more interesting... like watching paint dry.

Really enjoy Hawk in past movies. Not this one.

cimbaro - Presents Non-Facts And Then Tells You They Weren't True

This is a terrible documentary if you want to learn factual information about Tesla's life. You would actually know more if you skipped it. There is some factual information sprinkled (sparsely!) about, but this documentary in a couple places actually presents pure fiction that never occurred--and then tells you "This never happened." The worst of these is a scene where Edison meets Tesla to tell him that Tesla was right, and Edison was wrong, about the superiority of AC current. Oh, sorry--what we just showed you never occurred, so please forget what you just saw. I have NEVER seen a "documentary" do this before. It's a shame to see the lows to which Ethan Hawke has sunk. There is an entirely incongruous music video (I kid thee not!) toward the end of the movie, the purpose of which utterly baffles me. It just does not fit, and I can't imagine who could have conceivably come up with such a ludicrous idea. Look elsewhere for your factual (and nonmusical) information about this enigmatic inventor.

MBAware - To Each His Own !

This movie, although it does highlight some of Tesla's real life circumstances as well as facets of his relationships with Edison, JP Morgan & daughter, in general... it does NOT do Tesla justice! The movie is marketed for public consumption, although it seems more like the puppets pandering to the puppeteers and a lot of: "So we can talk without talking." The problem is... the movie is the same old-same old silent comunications and persuasions, not so cleverly hidden in plain view. Ho-Hummm .. . ... ... ... ......

The unintelligent individuals on here who clearly don’t know anything about Nikola Tesla would have you believe this is a horrible movie. When in fact it is quite imaginative, and pushes the points that Nikola Tesla had to deal with. From Thomas Edison, to JP Morgan. Nikola Tesla was let down by those who lack vision, just like by those who gave the 1 star reviews on here. If you like Nikola Tesla and want to learn about his relationship that he had with JP Morgan’s daughter, or about his assistant who decided to leave and do his own thing. Nikola Tesla lived a life that made all of this possible. Sadly, they never used his scalar technology. The world we could have lived in would have far surpassed the one we are in now, had those who lack the vision not impeded Nikola Tesla’s progress.

Maybe we weren’t in the right frame of mind, but it was just strange

Enjoyed the acting and Ethan Hawke played the part well...he really carried this poor script. Really hard to follow the storyline as it was full of gimicky neo-modern cinematic inserts to help us poor slobs identify with the movie? Painted stage sets add nothing to anything except distraction from the story. Often times I was confused as to whether I was watching a movie or a movie of a play. While I liked the movie generally, I felt like there was so much left to tell and wanted so much more.

I’m not clear exactly what the intent of making this film was. Is it art house? It’s trippy, factually inaccurate and interpretive, and yet the fourth wall gets broken by a narrator whose relationship with Tesla is oversold, who ends up telling us a bunch of it never really happened that way. And then that ending... it feels like that ending was done on a dare. The acting was good. The “cinematography” was weird. It is quite inaccurate, and just strange. Not my cup of tea, although I enjoyed a moment here and there.

fivetoes - Better than a sleeping pill

I should have read the reviews first. Well the reviewers that rates this “bio pic”with more than 1 Star or being to kind. Total waste of celluloid. Would have felt better had I just lost the money through a hole in the pocket than intentionally spent it on this insult to a man before his time. Certainly didn’t paint Thomas Edison in a great light either, wasn’t there but heard he was a real scoundrel.

I give this two stars instead of one because the movie started off well ...but at the point Tesla begins to sing 80s Pop songs… It drops to a one

Cgrigs - What a wasted opportunity for such an interesting subject.

Zero plot line, zero climax, zero finale. I wanted to see this great struggle between AC and DC power and the writers struggled to tell the story. A very talented cast which was wasted with poor direction. No cinematography as a fair amount of the scenes used painted backdrops. A few scenes get interesting but then the narration states that these thing never happened in real history. Character’s pulling out Smart phones, having food fights, and when the movie stalls with no clear ending in sight, Tesla (Ethan Hawke) himself gets in a backdropped stage and sings an 80’s pop song with an irritating low voice. Basically Tesla’s life story meets a bad acid trip that thankfully only lasts under two hours. Waste of talent, waste of opportunity, and waste of viewers time.

toddinparis - Was this written by an eight grader?

The insipid script isn't worthy of the inventor. It seemed like the writing was that of an eight grader doing a biographical report from Encylcopedia Britanninca. The director tries really hard to be artsy, mysterious, and weighty, which just comes off as pretentious. The '80s music and the appearance of cell phones and PowerPoint presenations is are anachronisms that serve to distract from, rather than contribute to, the story. I felt embarassed for the actors.

This movie is bad quality, does a terrible job creating a linear story line and has completely unnecesary cuts to a random woman narrator. I love Tesla but this movie blows.

Didn't quite work for me. I found the portrayal of Tesla to be over passive almost arduous at times. Perhaps this depiction is true to accounts at the time but it left a hole in the character development and the overall fluidity of the movie. Almost felt like a collage of individual shots as opposed to a story with a progressive and meaningful narrative. Sorry.

I’m an Electrician. Licensed contractor. I appreciate what Tesla did and tried to do. I have read extensively about him. I have seen movies and documentaries about him. This does little to enlighten. This film is all about the director.

The story of insightful viewpoint. Very well done. I enjoyed the movie.

Fland12 - Not your usual biopic

Worthy of the man ahead of his time. 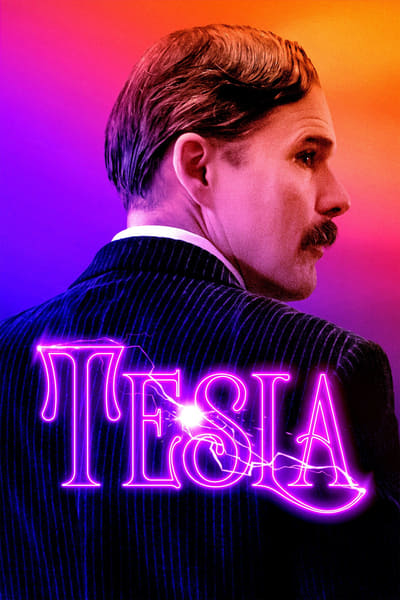