A team of fearless mercenaries is hired by billionaire tech CEO Donovan Chalmers to protect a piece of technology that, if exposed, could destroy the world. Their mission becomes even higher risk when Chalmers’ daughter is kidnapped by the extremely dangerous terrorist group The Pardoners, who will stop at nothing to obtain the tech. The work of billionaire tech CEO Donovan Chalmers is so valuable that he hires mercenaries to protect it, and a terrorist group kidnaps his daughter just to get it. Hard Kill Wiki

Take on a madman. Save the world...

I’m a huge fan of my bravo peeps Natalie and Lala. Bruce and Jesse are a solid second. ;) But ooooohhhhh man....my girls couldn’t even do some justice here. I think the script was poorly written and poorly produced. Acting wasn’t so awful, but I sure did a ton of candy crushing for the duration of the movie since it was that boring. Maybe Lalas eyebrows can get the next script because that’s all I saw this entire film. Xo

Chief Josh - Worst movie I have seen in a long time

I thought with Bruce Willis it was going to be good but I have seen B movies with better acting!!

I think this is the worst movie I have ever seen. Bruce has sold his soul to the devil. So sad, I used to love his movies, but this is truly the worst. Please save your time and money.

I made about 30 minutes in and finally had to shut it off.

The acting is so bad you can call out the lines as they are happening. The actors even talk slow to drag out the movie. Bruce Willis is only in it because the Producer produced a bunch of films he’s in. Then I wondered what the hell was going on with the chick playing Bruce’s daughter. She had horrible lip injections and face surgery. A little digging on the internet and she is the Producer’s fiancé. Makes sense. My girlfriend pleaded with me to turn it off but I felt like I was in Mystery Science Theater 3000. For the love of God don’t waste your $7 bucks renting this. I’m going to give Bruce a hard time if I see him on the streets.

I almost couldn’t get through the preview. When will actors realize its time to stop? Bruce, Deniro, Al, it’s time to stop.

hemanwarriorz - Ugh. Bad. Really bad. Not worth your time.

Horrible action that is not realistic ... absolutely horrible / the worst acting I’ve seen in a while and even more ridiculous plot.

Horrible writing - big plot holes - things unexplained.... how did Bruce Willis attach his name to this? Couldn’t wait for it to be over.

TainoNoel - Lost precious life time, will never get back🥴

Umm pretty sure someone was like “hey Bruce, wanna make a easy 10k” he is in the movie about 10 min in total, and it was in front of green screens I’m sure. Bad acting, bad movie, bad plot, worlds worst villain. I mean bright as heck and they running around with night vision. This was 100% a made for TV movie.

Don’t waste your time or money! Writing terrible! What an awful movie. Shame on you Bruce Willis!

Seen it on the weekend and we loved it. Has some minor dialogue but the action and chase scenes are worth alone to rent this film. I highly recommend this one

From now on I will read the reviews before I rent a movie. The acting was so bad and the story very predictable. Give the $6.99 to charity!

Surpised by all these bad reviews, the film isn't bad at all. Good acting, thrilling storyline and the action is superb. Bruce Willis is a legend and if there's only one reason you watch this is because of him.

Plot is horrible, acting all around was bad and not believable, shot in one location, made endless conversations to make up for the lack of content and purpose.

The best part of this movie was the cover. It’s all down hill from there.

Bad acting, story didn't really make sense, but I did fall asleep so I might have missed something.

Worst movie that I have seen in years. Low budget and B-acting. Can't believe they would release this movie.

Jesse Metcalfe and Bruce Willis did an excellent job in this film. Plenty of great things to talk about but if you really want to be critical the film plot could have been a touch better. Having said that, Hard Kill is the movie to watch this month.

I’ve seen some horrible movies but this one tricked me good. Big name Bruce Willis and that’s about it. Horrible all the way around.

I should have read the reviews...this movie was terrible! It makes Steven Segal look like an Academy nominee.

The acting could have been better but if your here for the action then you weren't be dissapointed. Two of my favorite actors in one film. It's a win for me!

Good action and storyline. It did drag a bit in parts but it was totally worth the rent. Bruce Willis still got it after all these years.

Gave it a try and tried to sit through it but I just couldn’t watch it anymore. Waste of $$

I can’t believe I spent $7 on this! Willis must be very desperate these days.

IAmMisterX - Expected so much more

I figured this would be a great action flick to watch on a lazy Saturday afternoon. Other than the story line and plot being more than predictable, the acting and camera work are laughable. Calling the acting subpar would be complimentary. Do yourself a favor, and don’t watch this movie.

Bruce Willis does it again! Love the way it was shot and edited and the thrilling storyline flowed right to the very end. Really entertaining. A must watch!

The acting in this was horrendous. $6.99 rental just because of Willis is not acceptable

Please do not waste your money or time on this morvie. The writing is so bad you'd almost think it was an attempt at a spoof.

I only wish I had read the reviews before buying this movie. It really is as bad as most of the reviews indicate. I'm pretty sure I've seem better acting in high school plays. I honestly couldn't believe this was a Bruce Willis film. Lesson learned!

Really wanted to like this because of Bruce Willis, but even he couldn’t salvage this train wreck... bad script, bad acting. It is honestly unwatchable. I only made it about 30 min, and turned it off. Ending might possibly have been good but... I don’t even care!

🥵🤮🤮🤮Please do not waist your time

Horrible, horrible acting! Even Bruce Willis sucked in this movie. The pace was slow and awkward. I had to end the movie early. It was so bad that it was painful to watch!

play.lilred.me - Is this supposed to be satirical?

The writing and acting is so bad it’s almost unwatchable. There are better shows on network television. I am not a picky viewer, I’ll watch just about anything but this BAD! Don’t waste your money or your time.

Horrible dialogue. Pathetic character development. No believable story. Three strikes. Action scenes were dumber than a bag of rocks. In between action scenes were dumber than ten bags of rocks. Rental price was $1,006.99 too much in that one would want to be paid at least $1K to sit through this con, just to cover the brain damage. Bruce, please don’t do this again. You’ll end up being remembered as a sell-out and a Grade B failure. Did you lose a bet?

painted - I watched to see if Lala Kent could act...

I watched this, despite the bad reviews, to see if Lala Kent could act. I still don’t know. Between the awful dialog, terrible plot, all her Botox and fillers AND everyone else’s bad acting, I couldn’t tell if any of them actually knew how to act.

So bad..... so incredibly bad... I can watch some really garbage movies, but this is just absolutely horrible.. I would rather watch an air fryer infomercial easily would be more entertaining than this EASILY.

Example: best place to hide from gun fire? Behind cardboard.

Feels a lot like those movies from the late 80s and early 90s like Eraser and Hard to Kill (title is practically the same) but on a low budget - lots of terrorists getting killed! Bruce Willis isn't the star - it's Jesse Metcalf and he's pretty good. It's a check your brain at the door movie - dont' take it too seriously or you'll be disappointed. .

I also thought it would be worthy because Bruce Willis was in it, I was wrong. Even he wasn’t good in this movie. Wasted $s.

Richmoves - It doesn't get much worse than this!

This has some of the worst acting and worst scripts ever. it comes across like a film that was shelves and then we released because viewership is up due to quarantine. They figured they would make a buck on Wiliis's name. Grade F crap!

Jesse MetCalfe is passable as the action hero and Bruce is his usual self, kinda just there.

Not worth the rent. I’m pretty open for B rated movies but there’s not much to this movie that will keep your attention. Even with all the cheesy shootout spraying bullets everywhere , I was more Interested with my phone or looking up what to watch next.

svburns - Death would be better than watching this

The acting is OMG so bad...Lala Kent lord have mercy. Garbage acting and I stopped watching it on the plane with literally NOTHING else to do. Horrendous

Kobe & Stan the Man - Bruce must be short on cash

What a terrible movie. Terrible dialogue, terrible fight scenes and most of the movie takes place in an old warehouse. Bruce must be doing somebody a favor to stoop this low. Would have given it 0 stars if it was an option.

Fanuc and Motoman - Bad acting across the board

Bought the movie thinking it was going to be awesome because Bruce Willis was in it. It wasn’t, and that’s why everyone’s going to buy it. You’ll be disappointed.

tiaochiyu - So bad yet so good

Acting was incredibly bad. But the action was terribly bad. watch it It should be relabel as comedy/action. It’s the modern Steven Segal film. 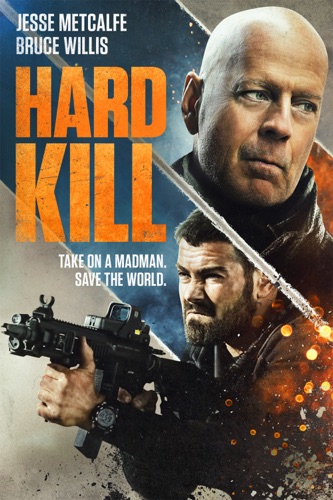