By the year 2067, Earth has been ravaged by climate change and humanity is forced to live on artificial oxygen. An illness caused by the synthetic O2 is killing the worlds’ population and the only hope for a cure comes in the form of a message from the future: 'Send Ethan Whyte'. Ethan, an underground tunnel worker, is suddenly thrust into a terrifying new world full of unknown danger as he must fight to save the human race. A lowly utility worker is called to the future by a mysterious radio signal, he must leave his dying wife to embark on a journey that will force him to face his deepest fears in an attempt to change the fabric of reality and save humankind from its greatest environmental crisis yet. 2067 Wiki

The fight for the future has begun...

What do you think 2067 movie? Can you share your thoughts with other peoples?

The most horrible movie !!!

2067 science fiction movie was alright. (Spoiler Alert) it’s a time travel movie and might be a little confusing. The main actor really should have been a lady actress instead of the skinny dude playing the main roll. He cries a lot and screams like a girl, so I personally think his part should have been a lady. This is one of those countdown movies and instead of fixing the disaster they make a lot of drama about nothing and of course the countdown is close. The ending is a little strange and to be honest there is no emotion or feelings to make you care much about who lives and who dies. One Star People!

Following the story, I was a bit confused about what was going on. Time travel does that sometimes. But felt that at the end it all came together really well. Enjoyed it.

The idea was terrific. The acting was sub-par. Fair amount of cliches. Either I’m growing dumber with age or, they did a good job with the revelation at the end. If you can get past the mediocrity in acting and cliches, it’s not a bad movie.

DrDPepper - A script and plot worthy of a 10-year-old

The most cringe-worthy aspect is how hard it tried to be good. Maybe it was the editing, maybe the writing, maybe the acting, I can’t pin it down to just one thing. Regardless of where the fault rests, this gets a massive WOW for ending up as a lame, predictable version of any other sci-fi movie you’d be better off watching.

MercinARES - The future is only HD

Seamless is accurate - The worst movie

This was a colossal piece of crap and I’m being as nice as possible. How did the ever get released. Glad it was only $0.99 to watch. I still feel like I over paid.

Drillsarge77 - Watch this, you will not regret it!

It's highly entertaining science fiction romp with some fantastic visuals. I have no idea how some folks are giving this such a low rating. The only logical explanation- Harvard students turned film critics. Honestly, this is a well made film with a plot not so easily predictable. Not heavy on the science like Interstellar-which apparently is the bench mark by which all sci-fi films are now judged by. 2067 can certainly hold it's own in the genre. Note: It's 99 cents to rent right now, suspend judgment and enjoy.

It is a very good movie. I am glad I ignored the negative reviews and took the leap of faith. Well done sci-fi exploration into ethical ramifications of time travel. Thoroughly enjoyed the movie!

I should’ve stopped when I saw the description mentioned “Climate change” I’m so tired of Hollyweirdos pushing their agendas on us, we just want to sit and be entertained no lecture. Awful movie, it doesn’t even make sense

The Nuttall - Disaster of a movie

It is a disaster.

I refuse to pay for being lectured about climate change. Must entertainment force politics on us?

bad storyline, poor acting skills, too much emotion for an emotionally dull storyline, not enough detail and fun, just overall really bad in general, waste your money and watch it like I did, youll be very disappointed!

Very emotional story set within the backdrop of climate change.

Weak story. Terrible editing. No character development at all. Spent all their money on the set and a few mediocre special effects.

The trailer is greatly misleading for this, making it seem way cooler than it is. It’s low budget, bad acting, poor story that’s confusing with many plot holes. It doesn’t make a lot of sense. And the acting takes place over like 2 small stage locations. Could have been a play. Don’t bother. Wait until it’s $0.99

Cinematically are really good. Story is short but they try to extended it with mindless talking. Acting wasn’t so painful to watch. Literally fast forward in a section so they could just get to the point. Would not watch it again.

Not original or engaging at all

Another Movie with loads of potential ruined by the ending.

Some weird parts, but I think that this movie shows what small studios can do.

Climate change propaganda, but still entertaining. So the Earth was created by a huge explosion of heat and gases, but somehow it can't handle us using said gases for heat and energy? It would be LOL funny if it wasn't such a dangerous cultic ideology that is trying to bring America to it's knees economically so they can rule globally.

Climate change is a hoax

shugashaka - A triumph of science fiction!

What if all the trees on the planet were gone? Where would our oxygen come from? What would you do to save your family from the daily threat of hypoxemia? 2067 is a deep and thoughtful yet gripping exploration of a possible not-so-distant future. Beautifully designed with realistic imagery coupled with powerful acting, 2067 immerses you in a world that explores the paradoxes of the fabric of space and time. Are you ready to jump to a year that is just under 50 years away? I highly recommend this film! Congrats to the entire film team for bringing us a science “not-so-“ fiction gem! Please create more!

The trailer was better than the movie. The characters seemed like an odd fitted group. The background soundtracks were either too loud or extremely out placed music. I wish I could get reimbursed for being so dissatisfied with the movie.

This is probably the worst Sci-Fi movie ever, dialogue was pathetic as was the acting. A whiney foul mouthed protagonist DO NOT WASTE YOUR TIME OR MONEY

Farty McFartbag - If you can’t turn off your inner scientist, avoid this one

The cinematography is fun. The story is meh. The twists you can see coming. The ending is such obvious plot holes that you wonder who bank rolled this. It clearly wasn’t an Arthur C. Clark story, but you might still enjoy it.

mariordo - Not a hard SFi movie

Disappointing, the science in the fiction not solid, too much feelings, even cheesy. Not recommended for hard SFi fans.

Not worth paying for. But when it’s 2$. Great cinematics, horrible acting and storyline.

2067 is worth watching because it is topical, the fx are fun but not overpowering, the acting is, well, dramatic, but it's a dramatic topic. It's good, not great, but not terrible. It's worth watching.

Wow, what an incredible movie. his movie simultaneously allows you to check out of reality for a couple hours, but makes you think long and hard about your future path when the credits roll. While it may be difficult to look around at our world today and think we have any sort of control, 2067 is a nice reminder that we’re not doomed to sit idly by and let predetermined events befall us. We’re writing the future as we go.

This film has a deeply moving message about hope in a year when I think we all need it. Highly recommended. This is thought provoking and moving cinema wrapped in fun sci-fi.

The story was ok. But the editing was terrible. The movie did not flow well, not to mention the amount of plot holes. The buildup of the story was just off. Character development was weak. The brotherly chemistry between Ethan Whyte and Jude was just not there, there were more chemistry between Tommy Wiseau and Greg Sestero in The Disaster Artist. I just watched this movie to find out the ending. It was not entertaining but its not a total waste.

Plot and visuals are like something from a bad high school film project. Don’t waste your time with this awful movie.

Bmitchell64 - What in reality is "Artifical Oxygen"

Dumbing down of real science/

There's epic storytelling potential in marrying climate change and time travel, but 2067 is plagued by cringeworthy directing/overacting for the bulk of the film... until the final 10 minutes when it comes together beautifully. The final shot is awesome.

20 minutes into the movie and the background music is still playing. Made it hard to hear what was being said and actually became so annoying I had to stop watching. Acting was also sub par.

With so much terrible science fiction out there this was a timely mvie that even though it took its time, I felt it paid off. Thoroughly satisfying.

This was a really good sci-fi film 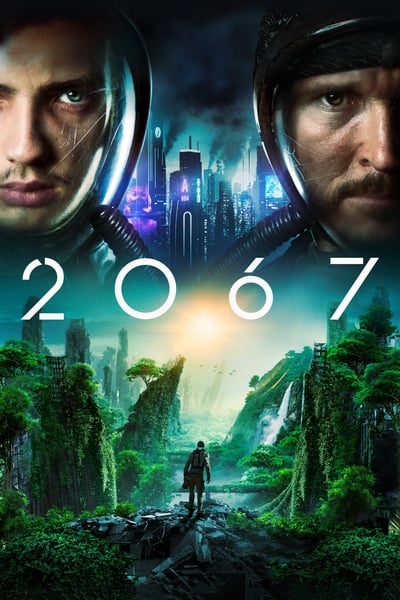