Into the Labyrinth Summary and Synopsis

When a kidnapping victim turns up alive after fifteen years, a profiler (Dustin Hoffman) and a private investigator try to piece together the mystery. The anomalous heat wave overwhelms everything, forcing everyone to reverse the pace of life: only during the hours of darkness it is possible to work, move, survive. And it is precisely in the middle of the night that Samantha emerges from the darkness that had swallowed her. A thirteen year old kidnapped and long held prisoner, Sam is now suddenly free and, traumatized and wounded, is hospitalized in a hospital room. Next to her, Dr. Green (Dustin Hoffman), an extraordinary profiler. Green in fact does not hunt monsters in the outside world, but in the minds of the victims. Because it is inside the memories of Sam that the clues able to lead to the capture of his jailer are hidden: the Man of the Labyrinth. But Dr. Green is not the only one chasing the monster. There is also Bruno Genko (Toni Servillo), a private investigator with an unexpected talent. Into the Labyrinth Wiki

Into the Labyrinth Movie Trailer

As far as your self-control goes, as far goes your freedom.

Into the Labyrinth Comments & Critics

What do you think Into the Labyrinth movie? Can you share your thoughts with other peoples?

Into the Labyrinth Movie Reviews

idmoviefan - What an embarrassment for Hoffman

What a boring movie. The scenes seem to crawl by...very slowly for no reason at all. Hoffman can do better than this! Seems like his scenes were just added in.

This movie had a great premise!! The feel and look of the movie is very much on point to create suspense and even horror. Also, this movie is cast perfectly. With that being said, the storyline seemed to not have a true focal point to drive it forward and I could not connect to any of the characters. Into the Labyrinth has no idea how to convey the characters true intentions and what drives their actions. Dustin Hoffman is one of my favorite actors, but he barely has anything to do until the last 15 min of the movie, and even then it feels like such a wasted opportunity. You have a talent of this magnitude in your film, and you can’t use him in a way to make the story interesting or suspenseful! This could have been one of his best roles, but it felt to me that you put handcuffs on his character, and than let him loose in the final 15 min, so its really sad because if he was the true focal point of the film and they gave him more to do, this would have been a better quality picture. You can tell that their budget wasn’t very high, and it shows with the lack of time in the labyrinth itself. I would have loved to spend more time in the Labyrinth and to see what the main character truly goes through while in there. Whoever came up with the look of the Labyrinth itself did a great job, but it was wasted in the final product as we spend most of the time in a hospital room, or with the detective trying to solve the case. The way the story tries to connect its characters to one another fails miserably. It feels like it’s telling two different stories at once, and hoping that it would connect in this big way at the end, but it actually does the opposite as the end result. You have no idea how the plot of this movie makes sense, and you can’t keep up with it, even on a second viewing. It makes me feel like they cut a lot in the editing room, so whoever did the editing should be fired. When you realize what happens at the end of the film, it feels like such a slap in the face to the movie goer for spending all the time watching the movie, and to me, it was laughable how bad the ending really is. It leaves you on this cliffhanger that doesn’t create a feeling of suspense, but it creates a sense of laughter in the worst possible way. It felt so out of left field. The director of this movie did a great job when it comes to cinematography and the performances, but knowing that we wrote this horrible script as well just appalls me. You have the director as the writer of the film, so that means you have one person controlling the whole narrative and it still doesn’t make any sense at the end result. To me, that is negligence as a story teller and is so sad. The only reason that this movie gets even 2 stars is for the fact that it had great performances, and a premise that could have been so intriguing and brilliantly disturbing. However, this is one of those times where having a low budget hurt this film, and they couldn’t get around it. Dustin Hoffman has moments where he shines, but because he is not the main character and he doesn’t have a lot to do, it feels wasted and I felt cheated which is such a shame. This movie had the ingredients to be a great film, but the execution felt sloppy and not focused. If you like Dustin Hoffman movies, I would skip this one as he is wasted in what could have been a great role and even one of this best.

Awful driving graphics, awful dialogue, poor follow. The only thing it has is it’s storyline which would have been better if actually directed and produced correctly!

I love Dustin Hoffman, and this was NOT a Dustin Hoffman film, I feel duped by the marketing, I think the trailer showed only the scenes of Dustin Hoffman. The acting was pitiful, the plot was terrible and I definitely wasted my time (and $6.99) on it. Move on to something else, this isn't worth your time.

This movie was a disaster. Both lead actors were awesome and the only reason we watched the movie until the end. Whoever edited this film should be fired.

rprios - This movie is mostly Subtitle.

Don’t be fooled by the trailer. I wish I could get my money back.

Worst movie I've seen in years. Hoffman must have made some bad investments to force him to take on this project

Into the Labyrinth Images & Pictures

Into the Labyrinth Posters 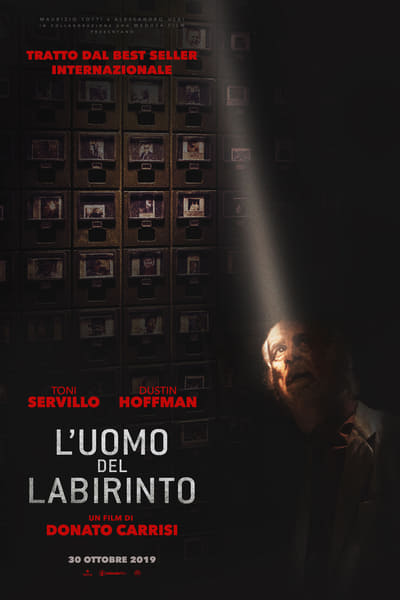