The War with Grandpa Summary and Synopsis

Sixth-grader Peter (Oakes Fegley) is pretty much your average kid- he likes gaming, hanging with his friends and his beloved pair of Air Jordans. But when his recently widowed grandfather Ed (Robert De Niro) moves in with Peter's family, the boy is forced to give up his most prized possession of all, his bedroom. Unwilling to let such an injustice stand, Peter devises a series of increasingly elaborate pranks to drive out the interloper, but Grandpa Ed won't go without a fight. Soon, the friendly combatants are engaged in an all-out war with side-splitting consequences. Peter is thrilled that his Grandpa is coming to live with his family. That is, until Grandpa moves into Peter's room, forcing him upstairs into the creepy attic. And though he loves his Grandpa, he wants his room back - so he has no choice but to declare war. The War with Grandpa Wiki

The War with Grandpa Movie Trailer

The War with Grandpa Comments & Critics

What do you think The War with Grandpa movie? Can you share your thoughts with other peoples?

The War with Grandpa Movie Reviews

The professional actor tries some different is fantastic! I love this movies!

Watched with my granddaughter and she loved it.

Took my mother to see this movie at a theater in Dallas. We were the only two in the theater on Monday afternoon January 4th. Did not live up to the hype. The trailer is funny, but the movie turned out to be long and boring. Dodgeball scene went on too long. Other scenes seemed forced. I dozed off a few times out of boredom. Chris Walken's talents are wasted in this movie. He has the only funny moment with "Semper Fi." Too many flops for a once great actor in DeNiro. Move on Bobby D.

When is Deniro going to retire? He should quit embarrassing himself🤧🤔🤐

De Niro was never actually a “good” actor, he had a Schtick that garnered accolades in one movie, and then we saw the same De Niro drama routine for decades. Now he can add this to the trash heap that has persisted since his move to forgettable comedies. Sadly, when you see Deniro’s face on movie poster it’s a good sign to avoid. Might as well upgrade to recent Nicolas Cage movies.

I’m suing for my money back,time wasted+pain and suffering! Failure in movie and iTunes for censorship of reviews!

If you love Deniro you’ll love this movie!! Great film👍🏼

hakehahahahahajuhaksisn i - My fav movie

This movie from start to finish is hilarious.

Don’t reall respect or like deniro anymore. Acting is all the same!

Wish I could understand dinero

KcpFL - De Niro phoning it in for a pay check

Usually watch these movies for a laugh, but this was a strain

Enjoyed this movie with our kids! Worth watching

Ha rule - No one lasted

Ten minutes in, it was off.

This reminds me of my toilet bowl, pretty $h1tty

A funny movie and reminds me of Diary of Wimpy Kid and all the other kids movies I used to watch when I was younger.

What has happened to DeNero? He was in some of my favorite films now he does garbage like this. What happened to dignity over money?

It was just not good

Sliderule1 - Yes please...I’d like to pay money to be bored

Not worth anyone’s hard earned money.

I figured out the plot right away it was like a hallmark movie. Not bad but not great. The preview makes it seem good but it’s pretty mediocre.

This is probably the best movie I have ever seen in my entire life. It os full of hilarious comedy like home alone. I LOVE THOSE MOVIES!!! I think everyone should watch this series!

This movie is not worth

This was a great family movie. Unfortunately, all these bad reviews are based on DeNiro’s political views. Put the politics aside and you’ll enjoy this movie.

I loved this movie and it is a great movie to watch with your family! There is a lot of laughs and the rent is so cheap!

Is there a less then one star? de niro seems to be on medication.

Craved1 - You can rent for the price of a cup coffee 😁

Sad to see that people are trying to tank this movie because they do not like his political views. It’s a kids movie made for kids. Want some fun entertaining family time at home then this is a good option.

I saw this back in October at a movie theater But the problem with the movie is the jokes it needed to be better but Robert De Niro is great in the movie same with Jane Seymour and uma Thurman and the rest of the cast have there stand out moments as well I mostly highly recommend this I for family because it like comedy movies like parental guidance and daddy day care for example and it far better then that trash awful playing with fire and who ever love that movie will probably find this movie not that good but I think it better if you like movies with that wacky humor then it for you if not it probably not for you must buy!!!!!!

Failed actors make failed films plain and simple this man needs to just check himself into a nursing home and give it a rest.

Won’t watch o buy anything this drop out high schooler acts in again. Great way to destroy your career than insult 75 million people in the U.S.

He needs to retire! The kid is better actor than De Niro!

Save your time and money. Don’t.... don’t waist a minute watching this awful thing of a “movie”

I bought this thought it was be a great comedy. The acting was terrible this is made for children to watch to fake.

I was afraid at first to watch this movie because there were so many bad reviews, but after watching the movie, I don’t know why it got such bad reviews. The storyline was solid and there were quite a few funny moments. It was still really cheesy in many areas, but that’s because its a kid’s movie; a lot of the acting is over the top to interest kids.

Needs to retire this movie keep getting worse and worse

How much money can these actors need that this is a thing they chose to do?

Starts off a little slow but then it gets really funny all the way to the end....five ⭐️⭐️⭐️⭐️⭐️

My son cried. Not because he misses his grandpa, but because of how terrible this movie was.

Wasted time and money. Disappointed with dinero used to love his movies lately they’ve been terrible.

His political views bleed into everything I can’t stand him anymore.

twistedchic - WE R IN AGREEMENT

I didn't give it a full 5 stars because it sagged at the end, but it was quite enjoyable.

Apple should pay me to have it not worth paying

Used to like De Niro till he got all political and threatening to conservatives, now I can’t even bring myself to watch a trailer with him in it.

S13gmund - De Niro is washed up

This movie makes me wonder if he has fallen on hard times and just needs to pay the mortgage. What happened to him? Sad.

@SortaBad The War With Grandpa

Have you checked out this giveaway? I entered to win a copy of THE WAR WITH GRANDPA on Blu-ray via @ redheadmomblog…

Be sure to enter to win a copy of THE WAR WITH GRANDPA on Blu-ray via @ redheadmomblog! Will you enter?…

I entered to win a copy of THE WAR WITH GRANDPA on Blu-ray via @ redheadmomblog! Will you enter? #WarWithGrandpa…

@KaraEngland15: Watching the Redbox movie war with grandpa omg I’m dying from laughing so much 😂😂I highly recommend!

Watching the Redbox movie war with grandpa omg I’m dying from laughing so much 😂😂I highly recommend!

The War With Grandpa

@noahsmom7 The War with Grandpa. 🤦‍♂️

Enter for a chance to win The War With Grandpa Blu-Ray Combo by Jan 15! #Giveaway

@reece_dinsdale: Oh man! Glorious photo of my Grandpa (far left) down the club with some pals. What you don’t see is his left arm, whic…

@reece_dinsdale: Oh man! Glorious photo of my Grandpa (far left) down the club with some pals. What you don’t see is his left arm, whic…

Enter for a chance to win The War With Grandpa Blu-Ray Combo by Jan 15! #Giveaway

The War with Grandpa Images & Pictures

The War with Grandpa Posters 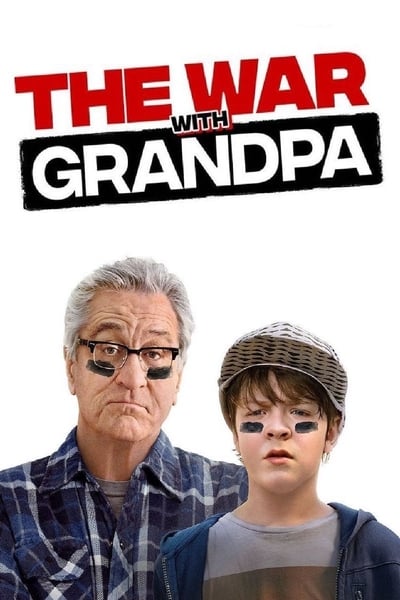