Batman: Soul of the Dragon Summary and Synopsis

Get ready for the ultimate showdown...

What do you think Batman: Soul of the Dragon movie? Can you share your thoughts with other peoples?

This was awful. One point for Batman but poor story. Sad

This is an elseworlds movie, but the title with Batman is misleading. Batman is nothing more than a supporting character and the movie has no true ending. It is very slow and boring at parts. Do not recommend buying. Rent it if you actually want to see it.

This 70s themed Batman movie was a fun flick. I enjoyed it.

Grimstone1 - Rent first before you buy.

I love Batman. However this movie is slow and little dull. The characters are introduced but don’t really act their characters. Example, Shiva (Worlds deadliest assassin) nope! Batman acts and looks very dull. And then they fight a supernatural threat? You would have thought it was a past/training to the best martial artists in the world. Not! Definitely rent first. I bought based on the trailer and I was wrong. Sorry all.

None only the movie as no style, nothing to do with the comics and almost nothing to do with batman. I mean take off the costume, take off Bruce Wayne and put somebody else in the movie and it's the same. And even worse.... the movie got no real ending! Sorry but this is a no go. Watch it if you want, but remember you were warned. This is a bad one!

The classic Batman TAS animation is brought back with grace and style. A Bruce Lee/007(Richard Dragon),A Batman, A Shiva, and A Luke Cage (Bronze Tiger) team up for a culture and style overload. Its badass, funny, heartbreaking, touching, inspiring and unexpected. Even until the last moments this work of 70s inspired art shows its got what it takes to be a Batman story and an excellent homage to the legend that is Bruce Lee.

Entertaining film. The USA version has been updated with iTunes extras. I will wait for this for this to go down in price before I purchase. If I am going to be short changed on the extras.

I love the James Bondesque beginning and liked the 60/70s vibre and music throughout the film. Maybe not the best film in the DC animated catalogue but it was fun and quite enjoyable.

Stands in a mighty force - I was looking forward to this......

Too often in film, Batman is the side character in his own film and sadly this movie is no exception. In fact, had Batman not appeared, the story would have played out exactly the same. Last week I bought Death in the family only to find out it was the same film as Under the red hood and now this. Apparently there is talk of resurrecting Batman the animated series, but after the recent content DC has released, I hope they don’t.

Batman: Soul of the Dragon Posters 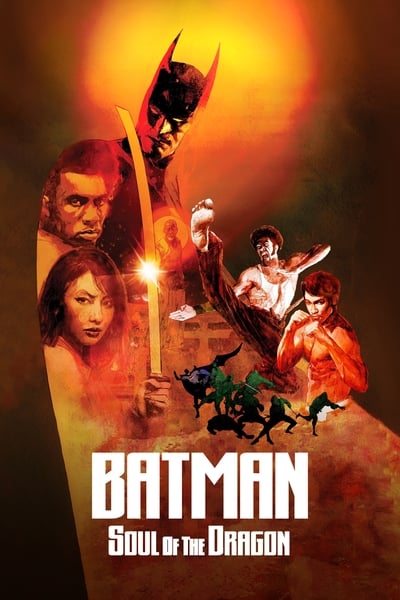