A loving family man with a promising future, Wade Porter (Stephen Dorff) suddenly loses everything when he accidentally kills the burglar who broke into his home. Convicted of involuntary manslaughter, Wade is sentenced to spend the next three years inside a maximum security facility where the rules of society no longer apply. Forced to share a cell with a notorious mass murderer (Val Kilmer) and subjected to brutal beatings orchestrated by the sadistic head prison guard (Harold Perrineau), Wade soon realizes he's in for the fight of his life and must become the toughest Felon of them all if he's to survive the block. For what doesn't kill you only makes you stronger. And in state prison, only the strongest will survive. A family man convicted of killing an intruder must cope with life afterward in the violent penal system. Felon Wiki

What do you think Felon movie? Can you share your thoughts with other peoples?

I've worked in a prison (Soledad). The corruptiontion and violence shown in this flick is not realistic to me. But, if an inmate caused problems, he could expect retaliation. Artistically, a very good flick - realistic & engaging.

The best Val Kilmer since his portayal of Doc in Tombstone. And Steven Dorff is amazing showing his depth of emotional range. This is a must see!!!

I was hoping for more and I guess if you have a room temperature IQ this would pass for a good movie. But trust me when the critics say this is a hackneyed prison movie they are spot on. Nothing but Hollywood spew trash

I downloaded this film because my fiancé spent 30 years in prison and said that this film was the most accurate portrayal of the experience of being inside. I don't suppose you could ask for a better accolade than that.

If you're white, and are going to prison, watch this to be prepared

Great performances, very engaging, teetering on claustrophobic at times. I initially caught it half-way through on cable and couldn't stop watching. Have since watched it several times.

Dontworryabit - Been there, done that

I've been in the same shoes as Porter, and when I watched this movie, I found more than 100 ways I can relate and recollect feelings that were depicted in this film. This is by far the best EVER written and produced 'real life prison scenario' film of all time!

This movie is incredibly powerful. It makes you think about the meanings of life and family. A spine-tingling performance by Dorff is complimented by the likes of Val Kilmer in this instant hit. If you only have enough time left in your life to watch one movie, this should be it.

I loved this movie because it really empvises the coruption in the usa justice system. at some point in the movie i just started crying from frustration

This is my favorite movie. The action never ends!

this movie could have done well if it had been advertised. Good acting, very realistic. I did not expect this to be very good, i was renting it for the actors. They really made this movie. this is worth buying.

This is one of the best and saddest prison dramas ever made. This is so because, here, you have a gentleman who has a wife and son who doesn't have that much money and, he made a bad choice without thinking about the consequences of his choice. Those consequences were losing three good years of his life being spent in the Security Housing Unit of a State Prison. Not only prison is one of the consequences, he also suffers from financial problems too in which later lead to his wife tentatively cutting her relationship with her husband and also the loss of their house. However, the film ends happy with the gentleman being released from state prison. This movie deserved a few Oscar nods and was overall, a gritty prison film.

I wasn't sure what to think when I bought this. Being that I'm a fan of Val Kilmer I thought that he'd offer up a good performance. He didn't disappoint. What this movie's about is honesty, and, being honest about who and what you are. It's not brutal for the gore, but because that's what it really is. Good movie, and a good moral.

This movie was GREAT! i actually had to leave the room in the middle of it because i was mad at what was happening but came back in like five minutes later and loved it in the end

I started watching with no expectations and it turned out to be phenomenal. Great acting. Captivating plot. Violent, but good.

Best movie I've seen in years. Val Kilmer gives an outstanding performance in a very powerfull movie. Well worth it.

I watch this movie all the time. Felon has a real feel to it. This movie is a must have.

scofloyd - Fantastic and way better than I expected.

I rented this film and watched it today. I thought it was very well done. Makes you feel like you're an inmate as well. Just very well done. Its a bit disturbing for some people as the film isn't obviously a happy one. But I loved it and would recommend seeing it.

Better than I expected. Patience with the intro but later on it will really catch you!

jimmycoway - could have done better in theater if it was advertised.

this movie was a sleeper.i went in to this flim thinking it was going to be a 2nd rate movie and turns out to be a great movie. with all the crap movies that get pushed into theaters just to make a buck with pretty people who can't act or the rap star who really can't act.it's nice to find a movie that moves you to the core with great acting. a unfortunate set of events that turn a simple man's life upside down test his will to not let the system break him. 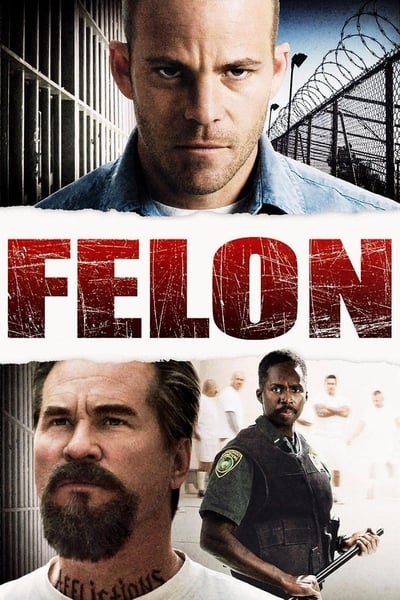