Garfield: A Tail of Two Kitties Summary and Synopsis

America's favorite fat cat is back, and this time, he's giving England the royal treatment! It's a British invasion of a different kind when Garfield (Bill Murray), along with pals Jon and Odie, travels to London and meets his mirror-image in Prince, an aristocratic kitty who has inherited a fabulous castle. The two trade places, and soon Garfield is living large as only he can! There's just one problem, the dastardly Lord Dargis wants him out of the picture. A Tail of Two Kitties is twice the laughs and double the fun for the whole family... It's good to be the king! Jon and Garfield visit the United Kingdom, where a case of mistaken cat identity finds Garfield ruling over a castle. His reign is soon jeopardized by the nefarious Lord Dargis, who has designs on the estate. Garfield: A Tail of Two Kitties Wiki

The Ego has landed...

I LOVE this movie and the 1st I wish they'd make a 3rd I like the animation instead of the drawn movies they're not any good but I can watch this movie over and over! I've already watched it 3x today!

Person of Few Words - WHAT CAN YOU EXPECT FROM A SEQUEL

As usual not as good as the first one but if it was the only thing on i would still watch it.

Funny, smart, even action packed, Garfield 2 is better than the first!

I thouht the 2nd 1 was a little bit funnier than the 1st one.

Will Kirkpatrtick - funny, but stupid

I can't believe rotten tomatoes gave this movie such a bad review!

I think this movie was funny. I enjoyed the first one a little more but i do like this one as well.

This one is dumb. The first is ALOT better

Seven83 - Not an attention grabber

We like this movie and so does our young daughter. It's humorous and the acting is pretty good. I'd rather watch this movie more than many other movies that I could mention (my best friend's girl, knocked up, etc..) because it's actually funny and enjoyable to watch!

I love this movie it's really good (but the pigs probably have Swine Flu :P JK) I love how it shows that both of the animals have trouble adjusting. And Prince isn't a brat

this movie is funny, cute. but not as good as the first garfield. i wouldn't really by this movie, but i would strongly recommend it for a nice trip wen your goin somewhere.

LadyPilot69 - Need more movies that are not all animated...

Wonderful and worth the watch! When is the next one coming??

Garfield is an awesome movie, I love it to bits. I adore garfield. He's just like a fat ball of fluff. Garfield is one of my favourite movies, I watch it over and over again and it never gets boring. It's a great movie but, it takes far too long to load! Altogether I give it:

This is the best movie ever. I watched it 6 times on the plane. Its a funny and action packed movie.

It's so funny it made me laugh my head off

@2k19lemonparty Garfield: The Movie & Garfield 2: A Tail of Two Kitties

garfield: a tail of two kitties (2007) has unironically reflared my suicidal tendencies

@DiscussingMovie This the sequel, Garfield: A Tail of Two Kitties

@jacksfilms Yo can we watch Garfield: A Tail of Two Kitties? #YIAYdate

@jacksfilms #YIAYdate I've never even heard of Garfield: A Tail of Two Kitties!

@topherflorence: you can tell java games were the wild west because there was an officially licensed JRPG based on Garfield: A Tail of T…

@thehurvmeister @touchytorracat a collection of my most prized dvds: mike meyers cat in the cat, batman v superman,…

• garfield : a tail of two kitties

Garfield: A Tail of Two Kitties

Garfield: A Tail of Two Kitties 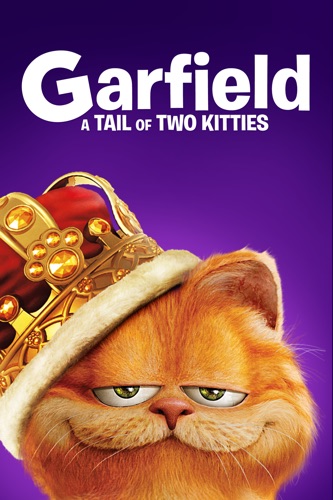