What would you do if you knew that in a handful of days an enormous comet would collide with Earth and all humanity could be annihilated? The countdown to doomsday is underway in this "gut-wrenching, eye-opening blast of a movie experience" (Jeff Craig, Sixty Second Preview). Mimi Leder (The Peacemaker) directs, guiding an all-star cast featuring Robert Duvall, Tea Leoni, Elijah Wood, Vanessa Redgrave, Maximilian Schell and Morgan Freeman. With the film's dynamic fusion of large-scale excitement and touching, human-scale storylines, Deep Impact makes its impact felt in a big and unforgettable way. A seven-mile-wide space rock is hurtling toward Earth, threatening to obliterate the planet. Now, it's up to the president of the United States to save the world. He appoints a tough-as-nails veteran astronaut to lead a joint American-Russian crew into space to destroy the comet before impact. Meanwhile, an enterprising reporter uses her smarts to uncover the scoop of the century. Deep Impact Wiki

What do you think Deep Impact movie? Can you share your thoughts with other peoples?

Another purchased movie that’s disappeared from my Library

Missing sound in a lot of parts

7Kevins - A classic disaster film that will have you shocked and amazed at various points.

I know the disaster film genre normally gets a bad reputation, but some of them actually inform us about how humanity can survive and thrive even in the worst conditions. Deep Impact is one of these disaster films that overcomes the bad reputation usually associated with its genre because of the solid relatable premise and adept cast. You must watch this film especially if you're into stories about love and survival. This is what Deep Impact is truly all about.

double digit - Not that great

I thought this movie would filled with action but I was wrong. I had way too many slow parts. It only good when the stuff started happening. All the stuff in between was just filler. And it just slowed everything down and I started to lose the feeling of it being good.

tabuu9 - A great movie from start to finish.

Most people who saw Armageddon might call this a knockoff, but it's not. This movie has more emotion while Armageddon has more action. Choose your pick.

JosiahMagnet - Normally not a fan of disaster films.

However, that being said, this one is pretty good! While I think Armageddon is better, this movie does have a lot more emotion to it. I almost teared up at a few parts. Anyway, watch this film!

VvHotel - After all these years I still love this movie

I was only about 10 years old when it came out, but I loved this movie. The score of this movie overwhelms me with emotion. It makes me cry every time I see the scene where Vanessa Redgrave passes away. Great movie effects for its time, but the most important factor is the emotional toll conveyed by the film. Great acting. Never get tired of this movie.

CheesySquid - Best Movie I have Seen

This was the first movie that the ending made me break down and cry. It was just so moving, I…Thats all i can say.

This movie is very good and I really do advise for you to see it because of how good it is. I don't care for your opinion it is a five star movie.

Okay, so, I watched this movie last night, and the ratings said it had brief language, but it has a LOT of language! And it has some inappropriate content. Take away those things, and it just might be a good movie! :/

It's great that I bought this movie a while ago, my device died, and now I'd have to pay $18.

Obviously it's the better of the two, and you know what I mean. I'd even go so far as to say that it's good. Judging on the disaster movie curve, deep impact is worth a look. Still, this one feels a lot longer than its two hours, tea leoni is a terrible, awful actress, and the movie is just one long commercial for msnbc.

Not sure where these review ratings are coming from. The concept is interesting and could have made compelling movie, but the plot limps around on a bunch of tired old plot crutches - teen love angst, young bucks vs old has-been, up and coming investigative reporter… The high profile cast simply phone in their performances. If you want a mediocre movie to kill a couple hours on a long flight or dull evening, this might be it. But don't expect any revelations from it.

This is the movie Michael Bay's ARMAGEDDON wished it could have been. This is the movie THE DAY AFTER TOMORROW wished it could have been. This is that rarity, a disaster movie that's well-acted, plausible, intelligent, and sweet. Tea Leone gives her best performance ever. Morgan Freeman so completely embodies his role as the president that you wish he'd step in and take over the real job. Elijah Wood, pre-LOTR, is just amazing. A true must-see.

Loved it one of the best movies I've ever seen plus got mad good actors like Morgan Freeman and Elijah wood from the LOTR trilogy!!!!!! I want to buy this movie and everyone should see it

The plot was great,the actors were amazing,the effects were good, and it was really moving, the ending was really moving it made me cry, it makes us want to appreciate what me have! Good movie

This has to be one of my favorite disaster movies. It isso beautiful. There is the disaster from the president, astronauts, a news reporter's mind, and one from a teen boy in love's mind. He found the comet (BTW Elijah Wood is a great actor). He loves his girlfriend, Leelee, so much that he marries her to save her. You can tell the love. Buy this movie if you want to see a great disaster movie and a beautiful love story combinded. Mimi Leder is a great director. Bravo. Great movie! Made me cry.

Graphics for it's time is fantastic, wonderful acting

Awesome movie. Morgan Freeman does an excellant job portraying the President of the United States and the multiple storielines create a more realistic plot. Makes me stop and wonder what would happen if we were to face an Extint Level Event and society began to crumble. James Horner did a great job with the music for the score.

LE Studios - This is was more emotional then Michael Bay's Armageddon

I remember this movie came out the same year Michael Bay's Armageddon in 1998. I liked both but this had more emotional impact that was honestly more believable then Armageddon which by the way definitely got the executive producer Steven Spielberg's fingerprint. Actors and actresses did a good job making this feel realistic as possible. It's worth watching. I been waiting for Paramount/Dreamworks to release this on iTunes since they start selling movies. This definite worth adding to your video library collection. Especially it having a Dolby Digital 5.1 Audio output where you can feel the Deep Impact!

As of this time in August 2015 this movie is almost 20 years old and they still want 20 bucks for it. It should be half that price by now. Other than that this is an excellent movie however Armageddon is still far superior in every way but this is a very close second place movie.

this is the greatest disaster movie in the history of the planet. i watched with my sisters at least once a day everyday for two months straight, really im not kidding, its AWESOME!!!!!

that 'Deep Impact' was made a few months before 'Armageddon'. When I saw this movie on the big screen for the first time, this was a blockbuster. After people started seeing 'Armageddon' everyone forgot about it. But this one really shows a great depiction of how the world would react to a meteor/asteroid/comet and the emergency procedures that follow (Noah's Ark, national lottery, etc). If you appreciate Armageddon or the creative movie process in general, you should see this movie first.

One of the scariest movies I have ever seen! And,all too possible...

When you reduce the amount to realistic levels than i will buy it. Stop ripping me off because I live in Australia. You might be legally allowed to do so but you are ethically and morally corrupt.

its so sad when andrea says its been an honour serving you and spurgeon says no the honour is mine....so sad...

selsox - One of the best disaster movies ever

Massively underrated; overlooked because it came out at the same time as Armageddon. This is a more thoughtful, human story. Brilliant film.

Please put the Extras On Thank You 🙂👍🏻

I've always preferred this film to its obvious point of comparison, Armageddon. I just thought this was far more realistic in terms of "what if" whereas the other is more "America! F**k yeah!". This lacks the sheen of a Hollywood blockbuster, but that works infinitely to its advantage, given the tone and subject matter. I could happily watch this again and again, always choosing it in favour of its previously mentioned competition.

His film is pure class. It's not overly dramatic but has just enough drama to keep you on edge. I thought the cast was wonderful, particularly Morgan Freeman and Elijah Wood. For an adrenaline junkie and sci fi lover, this film is perfection.

One of the best films ever made, it is up there with Independance Day, Armageddon, The Day After Tomorrow and The Core as great end-of-the-world themed films. The special effects are incredible, as well as the cast and plot. It has Morgan Freeman in it, so it has to be great. A must see film! 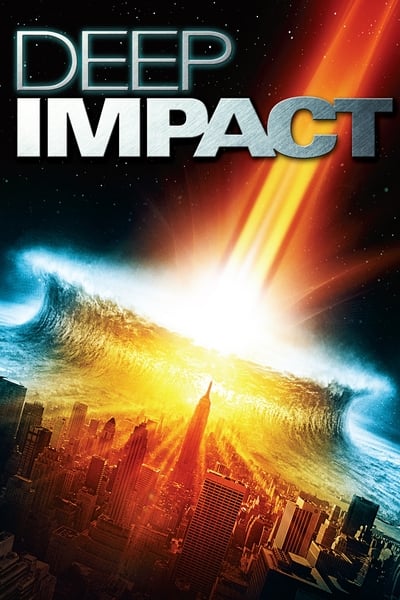