Ahoy, matey! Get ready for hilarity on the high seas with Kermit the Frog, Miss Piggy and all the Muppets in this exciting action-adventure, inspired by Robert Louis Stevensons classic pirate tale. When young Jim Hawkins inherits a long-lost treasure map, he hires the great ship Hispaniola to seek his fortune. With the good Captain Smollett (Kermit the Frog) at the helm and greedy Long John Silver (Tim Curry) at the heart of a dastardly plot they set sail for adventure only to discover danger at every turn! Featuring a rollicking score by Academy Award winner Hans Zimmer, this restored and remastered edition of Muppet Treasure Island is a fun-packed, music-filled swashbuckler the entire family will enjoy over and over. After telling the story of Flint's last journey to young Jim Hawkins, Billy Bones has a heart attack and dies just as Jim and his friends are attacked by pirates. The gang escapes into the town where they hire out a boat and crew to find the hidden treasure, which was revealed by Bones before he died. On their voyage across the seas, they soon find out that not everyone on board can be trusted. Muppet Treasure Island Wiki

winryan - You already know this movie was amazing

I’ve watched this when I was younger and still enjoy watching it with family for a super fun night.

So much fun for your family! All heart.

GailurusFulgens - Watch it cuz why not

I honestly love this movie! It's so cute and funny and it just puts a really fun spin on the story you already know. The characters are adorable, the jokes are funny (no matter how old you are), and the songs get stuck in your head for days! 10/10 would recommend

DLiaM - Family fighting over which movie to watch?

Okay, so I'm old enough to remember when this movie came out, but I didn't appreciate it as much then as I do now. This movie has everything; adventure, comedy, romance, music and yes, puppets. "Muppet Treasure Island" retells the epic novel in a kid friendly narrative and pioneered the adult inside joke in the children genre that Toy Story follows. With great music, MTI will have you singing along by the second viewing, and Tim Curry's performance lends legitimacy to the whole production. I love this movie, and if you're looking for a great flick for the family movie night that can interest everyone, than buy MTI. You'll be glad you did.

Such a great movie, and amazing music. Funny, yet filled with action, drama, and all that jazz. Love every minute of it!!

This movie is awesome. I has the soundtrack on my iPod as well. :D

This is a awesome movie to have. It will make people laugh over and over again.

Hilarious and a great take on a terrible book!

this is the greatest movie ever!! i have seen it hundreds of times and it never gets old.

this movie is one of my favoritesss!!! a comedy for the entire family?? how do they do it

Comedy Classic Connoisseur - Comedy for the entire family (how did they do that?)

Probably the best of the Muppet movies, this film is a must have in any family library. The characters are delightful, the dialogue is priceless, and you will love the surprise appearance of Miss Piggy. And they did a fairly good job of preserving the original story.

Love this movie, everything about it is great.

Tamscojac - One of my favourites

This is one of my all time favorite movies. I think I know the whole thing wordperfect I have watched it so many times. Full of classic muppet humor.

I bought this Muppet movie for my 5yr and 4yr old boys to watch on the PC via iTunes. after about 15mins they asked me to turn it off - "the muppets that were pirates were scary" they told me - - after checking it out for 5mins with them, I could see what they mean.I thought this was a G rated film, but I reckon Im either wrong and mistook it for G and it's PG or someone in classifications has got it wrong. Muppet movies are usual pretty good, I remember growing up with them - but this treasure Island one just has some scary looking puppets that scared off my two little guys enough that they didnt even want to watch it!!!

The iTea Guy - Best movie ever

Well not realy, but it's one of my top 5. I watched it constanly as a kid and I still do. Great songs great characters and an exellent parody to a classic book.

DAWG???? I always thought this was the funniest part of muppet’s treasure island as a kid and now it’s literally me…

@andrewsillett They haven't seen Muppet. Treasure. Island? Who ARE these people?? Why wasn't it on the interview?? 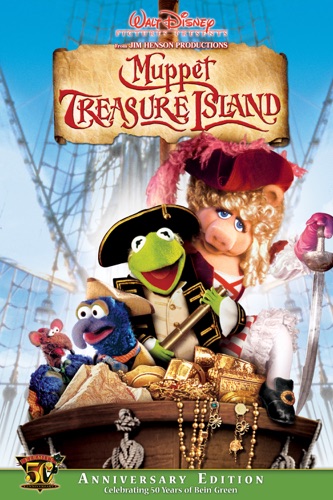