The life of a dreamer, the days of a business, and the nights in between...

Boogie Nights is a dazzling good time and beyond that Paul Thomas Anderson manage this movie to be rauchy and dirty at the same time. All of the performences were amazing and compelling but some of it is kinda weak but this movie isn't bad it's a masterpiece of what actors struggle with drugs and jolly good times.

Movie is hilarious, stylized, & all around great.

the Howell man - One of the best movies of all time!!!

For younger viewers, this movie is a blast; for mature viewers, it looks as if a young filmmaker is showing off. Overall it's an okay movie.

I bought this movie 5 years ago and I still watch it when I can. It’s drama mixed with some humor. It’s spot on with the 70’s and late 80’s.

I have to be honest. I think Heather Graham has the attention span of a squirrel, the IQ of a puppy, and is one of the worst actresses ever. Having that said, she was made for this role. I couldn't think of a better actress to play Roller Girl than Heather Graham. Mark Whalberg is usually pretty good, but Heather Graham steps up to the plate in this movie.

I just rent by SD version but can not play on iphone ,I don't know why. Pls help

I really enjoyed this film a lot. To be honest I think this is the best Mark Wahlberg film that I've seen. It's really fun to watch a film that involves stuff that was from the 70's to the 80's.

eajk - the best movie i have ever seen in my life!

Beyond awesome. The greatest cast ever, the best soundtrack, everything about this movie was astounding! I don't even know what else to say. The acting was mind blowing! This is one of those movies by which every other movie will be measured by me.

i'Chris - ONE OF THE BEST MOVIES EVER MADE !

Boogie Nights gives a great look into the inside of the adult entertainment industry during the late 1970s. Its a very bold & dark film that deals a lot with sex and violence, but still manages to pull out funny moments here and there. Its consistently entertaining throughout despite its long running time & it's very memorable as well. With its great storytelling, great acting performances(epically Mark Wahlberg), great music & its great direction... Boogie Nights is definitely one of the best movies ever made & one of my all time favorites. If u haven't seen it GO WATCH THIS MOVIE NOW!!!

Why isn't that last 55 minutes of the movie not working.

This is a must see film. Easily one of the greatest films in history. Enjoy.

An interesting look at the rise and fall of Americas greatest industry.

John Levulis - As Perfect A Movie Can Be Made

This movie still blows me away. Few movies are near perfect and this is one of them, IMHO. Casting, directing, cinematography, acting, music, editing...... Burt Reynolds showed that he could still act. Marco Wahlberg showed that he COULD act. John C. Reilly, Don Cheadle, William H. Macy, Jillian Moore, Philip Seymour Hoffman..... What cast! There is a scene where William H. Macy must have messed up his lines. It's where his wife is in the driveway doing it and he complains to someone about it. If he messed up his lines, brilliant job to put that in the movie. If it was written that way, way more brilliant to the writer.

The movie is perfict But it stoped at minute 18 , the secreen became black and i tryed to watched again but i couldnt. I search for report problem but i didnt find, so i wrote a review instead Need your support. Thank you

One of my personal top 5 movies, if not my #1. Unbelievable acting, story, music. Absolutely perfect!

I thought it was a distasteful movie, treating people like animals. I did not feel good about human society after watching this movie.

PTA's Boogie Nights was none other than a portrait of the rebellious life in the 70s, painted in the most amazing way you could ever know (meaning the screenplay). Fantastic cast, especially miss Julianne Moore who never seems to cease to fail on any character portrayl. What I truly loved about this film, the director was not afraid to censor himself, he basically took a huge long step to make this film. He continues to direct & write incredible award-winning material (Magnolia, There Will Be Blood), & if we had more independent filmmakers like Mr. Anderson, Hollywood wouldn't probably be more corput than it already is.

The low review is for the price. Granted, this is a great film, but by now evrybody and their Aunt Phyllis has seen Boogie Nights at least ten times.

Im a Radio Head - i luv this director

Great movie from my fav director.

I suppose it's possible to fail to see how this film captured the hedonistic spirit of the 1970s and the almost palpable shift into consequences that characterized the 1980s, but I would argue that those for whom this is the case simply didn't live through the time. Or, if they did, they weren't living *in* the time. What is most remarkable about Boogie Nights, perhaps, is how Anderson--who was only something like 23 or 24 when he made this--channelled the details of the popular culture and social psychology of an era as if he were dictating them from the prior day's memories. Clearly, his film emerged from a deep nostalgia for something that marked his early childhood, and we are lucky that he held so tightly to his impressions. Nineteen seventy-seven was the apex of the Charlie's Angels craze, bralessness, disco, blue eyeliner pencil, skates, filmed porn, and the mythology of a carefree Southern California sun-culture that propelled it all. The deep sadness that lies at the core of this deceptively easy film--the disillusionment and price of empty pleasures and the need for a sense of family through it all--will resonate with anyone who's ever gone to far with anything in their lives (sex, drugs, love, spending, travel, you name it) and paid the price. it is an epic masterpiece, highly observant, and deeply American in its outlook. Although it was well-received when it was released, it was still underappreciated. Both Burt Reynolds and Julianne Moore were robbed of the Academy Award (losing to fine but now nearly forgotten performances by Robin Williams in Good Will Hunting and Kim Basinger in L.A. Confidential). Paul Thomas Anderson's loss to Matt Damon and Ben Afflect (Good Will Hunting) for Best Original Screenplay was, even then, scandalous to my mind. It seemed to be then, as now, like placing a higher price tag on a portrait-sized paint-by-numbers oil than on a magnificent, sprawling fresco with layers of shapes, colors and emotions. As absurdly, Boogie Nights was not even nominated for Best Picture. I wonder how many people who raved about the The Full Monty or As Good As It Gets (both nominated for 1997) still feel like these entertaining but comparatively insignificant films hold up as well as Boogie Nights? The supporting cast is extraordinary all around. Each character a fascinating, irregular pearl in a strand of human experience that if, it doesn't touch you, you're not looking closely enough.

3 Oscar nominations: Supporting Actor & Actress, Screenplay. P.T. Anderson second movie directorial debut that shows the world of pornography that mirrors life of John Holmes. Not a biographical depiction of John Holmes but portraying the fictional character of Dirk Diggler. Anderson shows the screenplay by using camera shots that separates screenplay in the same time frame while utilizing the soundtrack to bring out the action within the scene. Awesome soundtrack from one-hit wonders in the 70's and 80's. The all-star cast shows their first ascending rise to stardom in this must see great movie of all time to come out of the 90s.

One of Tarantino's top 20 films of the 90's. That says it all! Mark Wahlberg is awesome! Watch it!

You Bettah Do ittt. - Classic!

Thaaaaaaaank you Itunes for finally putting this movie up!!!! Seriously? The WORST movie ever made? I think not! Granted it touches some very harsh topics, but hey that's life in the golden age of pornography! The great cinematography and camera tracking shots are to be noted.

No this movie is no movie at all its poop

This Movie has it all. Great cast, great acting, great story and intense scenes. 5-5 stars!!!

In my opinion, one of the best movies to come out in not only the 90's, but in the last 30 years. Engaging, brilliant, wicked, smart, brutal.. the list goes on and on. Truly an American masterpiece!

Mark Wahlberg wishes he had one that big,it look fake!

After watching this movie, i'm at a loss to explain why its flown under my radar until now. PT Anderson is masterful: a ridiculous cast (Don Cheadle, William H Macy, Philip Seymour Hoffman and so on WTF?), a bromance that puts genre fluff like I Love You, Man to shame, smoking sex scenes, and coke meltdowns that make Henry Hill / George Jung (Goodfellas/Blow) seem like lightweights. A must. The hardest part is trying to find a film to watch the next night.

What a film! OK, the subject matter may not be to everybody's taste, but you'd be a fool to miss this film if you have anything more than a passing interest in cinema. It is full of jaw dropping moments. The ensemble case is incredible - career best performances but Burt Reynolds and Mark Wahlberg. Julianna Moore is also brilliant and Philip Seymour Hoffmann is ...... well, .... Philip Seymour Hoffmann. It's long - 2 hours 35 mins - so ideal for watching on your PC. The story and characters is always compelling and realistic. It's very tough in places, so not for the faint hearted. But it is Paul Thomas Anderson that really stands out. This is one of the best pieces of movie direction that I have seen - period. Oh, and the music is fab. It is not all disco; the music changes with the period. I nearly cheered when the Beach Boys track came on at the end. Highly recommended, but bring a cushion. Grant p.s. For movie nerds, the Alfred Molina character is apartently backed on the true life character, Eddie Nash, who also features in the Val Kilmer movie "Wonderland".

I've bought loads of films on iTunes so its funny I chose to write something on this movie, and being my first iTunes review I will make it a positive one. This movie is great! ups and downs, trials and errors for all the characters... great acting and Soundtrack too.. buy it and enjoy it! great film and top cast. Now I'm off to buy Scarface. Peace out.

@DLeeMac Not only is he racist trash, he's also a terrible actor. Might try and see if I can edit him out of The De…

@AuthorShout: A holiday can change everything… it did for Fred. Summer of '77: Beaches, bars and boogie nights in Ibiza by @fredsdiary1…

@fredsdiary1981: Take a journey back in time with these captivating memoirs by Robert Fear Summer of ’77: Beaches, bars and boogie night… 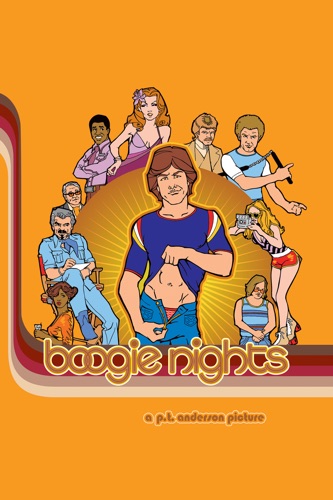