If you’ve never taken a trip into the mind of director David Lynch, this is the place to start. At once beautiful, horrifying, erotic and surreal, this 1986 controversial masterpiece is about the evils that can exist in even the most perfect of places. When college student Jeffrey Beaumont (Kyle MacLachlan) investigates a mystery in his small town, he unwittingly opens the door to an underworld of murder, sex, kidnapping and blackmail. Dennis Hopper gives one of the big screen’s most unforgettable performances as Frank Booth, a twisted drug sniffing villain with (how does one put it delicately?) “mommy issues.” Voted “one of the greatest films of all time” by Entertainment Weekly. The discovery of a severed human ear found in a field leads a young man on an investigation related to a beautiful, mysterious nightclub singer and a group of criminals who have kidnapped her child. Blue Velvet Wiki

What do you think Blue Velvet movie? Can you share your thoughts with other peoples?

If you like predictable movies that makes sense and spell everything out to you, watch something else. If you’ve never experience David Lynch and his surrealistic art in his films, you’re missing out. This is one of the best dark films out there. It’s an absolute classic!

One of the absolute worst movies I may have ever seen. I like most of David Lynch's other movies, but Blue Velvet is just...stupid. A complete waste of 2 hours.

If you like disturbing this is for you. David Lynch’s style oozes out of this movie and hooks you in till the end. It’s not for the faint of heart. Not to watch with kids or parents.

With one film David Lynch established a high watermark for American independent cinema that has yet to be equalled. A new genre that's both creepy & sweet, scary and naive, haunting and oddly humorous. A more elegant and hallucinatory slice of American life you will not find.

Possibly one of the most bizarre, disturbing films I have seen. For the most part the acting is just okay and then there's Dennis Hopper. Scary sick. But I will give it this. Despite the weirdness I couldn't stop watching it. The 3🌟are for those viewers who can make sense of this film.

Like other Lynch pictures, Blue Velvet requires patience and an open mind. Once you get inside, however, this film will captivate you until the very end in one of the more beautiful sequences of love and reunion I have ever seen.

A vile movie about vile people by a sick man.

Person of Few Words - ITS DIFFERENT

First off, the beginning of the story is just about as weird as it gets. From there we are taken on a thrill ride that you will never ever forget.

Like all David Lynch movies, there's wildly interesting stuff in here. Like all David Lynch movies, it is fundamentally incoherent. The best thing David Lynch ever did was Twin Peaks. He needed to sustain a story and he couldn't resort to stupid vulgarity to distract you from the fact that the plot had no plot. Twin Peaks is a better version of Blue Velvet. Although there's some interesting stuff in here. There always is. But incoherent. That's David Lynch.

It was slow, it was choppy. The actors I appreciated, but the film itself appeared to be someone's college film class project. Another critical mistake by the critics, right up there with their estimation of Dirty Dancing. LOL

mardoudan - Watch it again and again!!!

If you saw this movie when it released in 86 and like it. I recommend watching it again, because it is even better the next time.

… and sobering wake up call to how screwed up people can be. It's an intense film and it goes down as a classic in my book.

No matter what anyone says about this film, you need to see it. Dennis Hopper steals the show as Frank Booth. He is a sadistic psychopath who is both despicable and fascinating at the same time. Frank is one of the few characters in movie history who can turn profanity into a form of art and Dean Stockwell (Battlestar Galactica and Quantum Leap) is particularly creepy as his associate who makes and appearance in the film as well Blue Velvet is a top notch thriller and so much more on so many different levels.

I have to admit that when I first saw Blue Velvet during it's initial run in theaters I did not really like it, but David Lynch films need to been seen several times to appreciate their greatness--with the exception of Eraserhead, which I loved at first viewing. Blue Velvet was such a strange world and it's story so dark and disturbing that I just couldn't get into it. After a couple more attempts I apprecriated the dark humor a lot more and started to see details in the background and now place Blue Velvet on the top five five of my all time favorite films. I envy anyone watching Blue Velvet or Eraserhead for the very first time.

David Lynch has launched so many careers. I probably have watched BV over 200 times. Dennis Hopper should have got the academy award for his performance in this movie. Fantastic cast. Some of the best one liners also in a movie. I love all of Lynch's movies but Blue Velvet will go down in film history.

This movie I think is different but still a great movie

Vintage Lynch and perhaps his best film, this feature showcases the awesome acting talents of Dennis Hopper and Isabella Rossellini. Believe me you will remember this film for the rest of your life.

Do yourself a favor and see this movie. It's unlike anything you've ever seen before.

Eremita 69 - What creep came up with the storyline

Makes u wonder what type of sickos are out there.. and what goes through their heads to “invent” such characters (Frank Booth) Probably jerked off at it too. Don’t watch it, garbage .. vulgar, disturbing garbage.

Regardless of the well chosen actors, their excellent acting, the great director and his great directing--this story was not a good story. It was horrifying! It is not a "must see" movie. It doesn't teach anything and it certainly doesn't make the viewer feel good...

Without a doubt the most exquisite and also horrifying view of beauty in film by David Lynch. His mysteries are profound and always - at least to me - seem to be centred so poignantly; this takes such a balancing act to the level of genius; more of a European lens scape of America and her people than the narrative so many films from the USA produce. Isabella Rosellini, Kyle McLachlan, Dennis Hopper and all of the cast shimmer in a super-realistic dream state. I loved it when it was released and my mind hasn't changed, unlike some of the cult classics from the late 1970's/80's. An absolute bargain to rent for 99c, especially with those mechanical birds!

What To Buy This Please Thank You 🙂👍🏻

If you love the work of David Lynch then look no further. A truly astonishing piece of cinema.

Without going too much into this film, this proves how good most 80's movies were, enough said!

One of my favourite movies ever. Dennis Hopper's performace as Frank Booth is out of this world. Outstanding movie.

DisasterBasket - Amazing film - Could I please buy it?

If the kind people at MGM & Apple could work it out among themselves to make this film available to purchase in HD, I suspect I might be happy enough to contemplate writing a thank-you note.

This movie is a masterpiece, just a shame we cannot purchase it here. One for the collection for sure.

Soapsalesman - The genius of David Lynch

I have this in blu ray and thought I would rate it. I'm a big David Lynch fan and this is my favourite of his (equalled only by the excellent twin peaks tv show). This is a fantastic film with great performances especially by Dennis Hopper in his disturbing portrayal of the psychotic Frank Booth Kyle Maclachlan who is superb as the young, naive Jeffrey Beaumont (his greatest role as Special Agent Dale Cooper yet to come). It is of course brilliantly and beautifully directed by Lynch who also wrote the genius script. In a nutshell this must be seen by anyone with even a passing interest in film.

...4 stars? Are you fackin kidding me? It is one of the most perfect films that has ever, will ever, be made.

A must see for the late Dennis Hopper's performance

INLAND EMPIRE is there too

How great to have a david lynch film on the ipod. Please get some more films on here like the american Itunes has - Mulholland Drive, Lost Highway, Wild at Heart and Twin Peaks -Fire Walk with Me.

Also, Blue Velvet and After Hours both have weird Wizard of Oz fixations. What's that all about?

But like where did Jules get that blue velvet set????? I need to know please 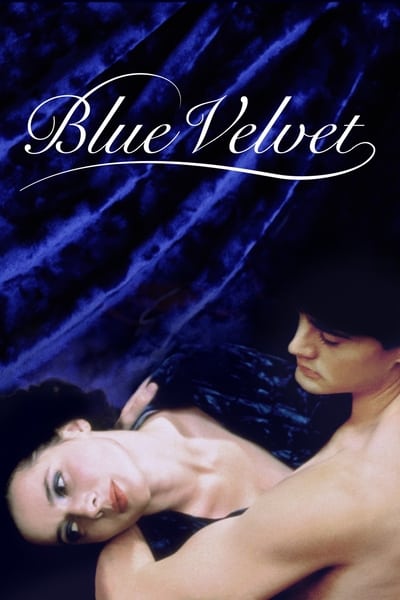