V for Vendetta Summary and Synopsis

From the Wachowski brothers and Joel Silver, the masterminds behind The Matrix trilogy, comes another intriguing, action-packed fantasy-thriller. Great Britain has become a fascist state. Now, a shadowy freedom fighter known only as "V" (Hugo Weaving) begins a violent guerrilla campaign to destroy those who have embraced totalitarianism. In his quest to liberate England from its oppressive ideological chains, "V" recruits a young woman (Natalie Portman) he's rescued from the secret police to join him on an epic adventure to execute a seemingly impossible task. In a world in which Great Britain has become a fascist state, a masked vigilante known only as “V” conducts guerrilla warfare against the oppressive British government. When V rescues a young woman from the secret police, he finds in her an ally with whom he can continue his fight to free the people of Britain. V for Vendetta Wiki

Soo good. I would show this to my kids 20 years from now. Amazing would come again for 30 more times!!!

This, indeed is my favorite film. The story arc is very moving and I love the meaning behind the movie. You must let yourself indulge in the movie to truly understand why it is such a masterpiece. For everyone saying that this movie isn’t a good one, you must first cease to be close-minded, then you may truly fathom the meaning behind it.

THIS COULD NOT BE RATED R,AT LEAST THIS SHOULD BE RATED PG-13

Defcon One - Good except homosexuality side story

This is the best movie I ever seen. It’s really meaningful.

I have tried to watch this movie three times over the last few years, trying to understand why people like it. I don't get it, its just so long, and ironically, kinda meaningless..at least to me. I just don't care for the story I think. To me, this movie is a waste of 2 hours, I don't get what poeple see in it.

V is for phony. It has multiple plots and pushes a left leaning political agenda, where traditional value people are the oppressors, and only the left is righteous. The only good movie by the Wachowski brothers, was the MATRIX. The director James McTeigue likes to push his liberal agenda. I would give a zero star if available.

I love this movie very much

This is such a great movie! Normally English accents drive me crazy but they are extremely tolerable.

I can't rate it zero stars but I want too. I wish I had my time and money back. How can anyone give this 4 or5 stars. :(

This is a great movie, underrated with an important message behind it to consider. And some great action! One of my all-time favorites.

This made me so scared😈

RobinSN90 - One of my favorites

This movie has lots of great action, great acting, and a plot that moves right along and sends a clear message. We never even see Hugo Weaving's face, but he can still make you feel every line just with the power of his voice. If you haven't seen it yet, do yourself a favor.

KbCheetah - This movie is great

This movie is great, and fun. I like this movie a lot. I love all of the characters in this movie. It is one of my favorite movies.

Makes one consider how politics can evolve, if not watched closely.

I enjoy quality. When you use violence, profanity, or nudity, because you cannot write or act with quality - I will just curl up with a good book. Wayne

Session09 - A classic with an important message

The movie included two sub-plots that had nothing with the story line; it was a purely political agenda. I thought that I had missed some facts so I watched it again with subtitles. Did not stop there and researched the internet for the plot of the movie. The truth is that the two sub-plots were just added to further group agendas. I promised myself that I would never buy another movie again without researching the story first.

V for vendetta is extremely bad because he kills people just because they did something bad the whole movie he kills everyone except the good people. He sets a bomb up and to escape he kills cops that's why v for vendetta is very bad everyone in the world should hate him.

Best DC movie based on a graphic novel in impressed good job Hollywood you finally did something right!!!!

Way better than I thought it would be!..I should have bought it instead of rent it. Both lead character give an outstanding performance!

the best movie I've ever seen !

One of the best movies i have ever watched

I love this movie, i don't know why I just do WATCH IT it's really good

Couldn't even watch it through because it would just stop playing, and the moments that played would skip through scenes and be muted; I'm really upset because it was basically a waste of 3.99 - and it's not just an HD problem, I've had itunes before on a different pc and even SD movies would freeze on pc but have no problem playing on devices like the ipad.

Had to fast forward through it. Couldn’t finish it. No real plot. Tomatometer is way off on this one.

Hiking Fool - Not only plausible...

...but we seem to be headed there. Not under an ultra conservative regime mind you... But to the movie: excellent. A nanny society, unable and afraid to think for themselves so the government tells you who you are and what you need. As for me, I will always remember the 5th of November and I will always pray for a government that is afraid of the people and not the other way around.

A movie that I will never get bored of watching! The storyline is brilliantly organized and performed. The only flaw some puritans may see, while compared to the original story, is that it lacks the anarchist role of Vendetta. Obviously this is a Hollywood mass production movie. Therefore extremist ideologies had to be changed and adapted to a more general audience. Nonetheless, the result is brilliant and the screenplay simply amazing. 5 stars!

thomasjust - The Epitome of Great Storytelling!

I have a rule: if you don’t like this film then we simply cannot be friends. In fact I even applied this rule when I was looking for my now fiancée; one of my first questions for her was whether and how much she liked this masterpiece!

DA HECK, USING BATMAN MUSIC IN THE TRAILER????? ….great movie though. I would highly recommend buying it

This movie is one of my favorites. Has a good story and is well made. 🌟🌟🌟🌟🌟

One would think that a former US vice president wrote this one. The movie attempts to wrap a ‘gothca’ moral message right at the end, but it’s so stupid and pubescent it makes you want to ask why did someone waste their time putting this on film. I can’t give this more that one star, not can I give it less than one star.

The Kramerstein - It's all wrong

The government was originally judeo-centric neo-bolshevik, not radical Christian. It's just Another Hollywood anti-Gentile canard.

Love the movie hate the different versions of the same exact move with no difference!!! Ip man! One of the dark knights & v for vendetta itunes wants me too buy again the same exact version!! Not sure why, the older version shows in my purchased items but is not reflected in the iTune store!! Please fix this iTunes in the future. Should have too re-buy the same movie too access it from the iTunes Store!!!

very well written, I hope people will understand that the a massage behind it.

This was a movie that was underrated! V for Vendetta is as great a film as no one would really want to admit to! And while Natalie Portman wouldn't win the Oscar like Black Swan she was top notch in it! Get the V out and watch it!

Boodiba - For some reason customer reviews are not showing...???

I first saw this movie shortly after it came out, and I enjoyed it then, but I know so much more now. I rented it tonight but I will buy, because it ranks as one of my all time favorite, prescient movies.

literally an amazing movie, it just stopped being able to play an hour into my rental though. idk how to fix this.

This movie shows how controlling and destructive a government can be. This movie made me think how lucky we are. Good acting all the way around.

Ouch gbfd - Loves this too much

Damn frames - In a word conclusion

The movie that American pretend to be British and wrote it to Chinese.

I cannot fully express my love for this movie. All i can say is that even though V uses violence, he's got the right idea. Corruption needs to stop and a revolution is the best way to do so. Freedom to the people!

Such a wonderful movie. It portrayed the near future but the future was much nearer than expected. Scripts & scenes in the movie are taken, sometimes word by word, in events that few have imagined to be true.

This is one of those films where the story line was ok but the way it was presented with some of the best lines (complicated) I 've ever seen makes it a cult classic, and I have seen a lot of films. Worth watching at least twice to explore the stuff you may have missed the first time.

Hugo Weaving and Natalie Portman are superb in this ultimate vigilante revenge movie. This film has more memorable quotes than any other. The "V" motif is beautifully used throughout. Makes people think about the role of governments in human civilisations. Brilliantly directed and written and filmed. For anyone that has thought about blowing something up to make a good point. It's a pity that the Fauxian masks used in this movie have, on occasion , been warn by low-life's claiming that they are acting for the betterment of Humanity, when they are only acting to satisfy their own selfish wants. A classic that will endure for many decades.

Unoriginal Nickname2 - It could have been good.

IF you can get past the fact that the movie is basically about a man abusing a woman until she develops Stockholm Syndrome its’ not a bad flick.

@maddie2turntt As someone who has seen V for Vendetta

@earsenthusiast the way ppl are talking about anonymous is so funny like... this isn’t v for vendetta relax

Rewatched V for Vendetta. Ya know.. to keep the fire burning.

@EverythingQAnon: All the “woke” mainstream people who hate trump, maga and anything that supports Trump, are now flocking to the Anonym…

@thedevman1: V For Vendetta; in the movie the “Guy Foxian” rebel said this of Government: “People don’t need a building, they need hope”…

@itsashlyperez: Should I watch V for Vendetta or just keep watching the news because truly it all feels the same. 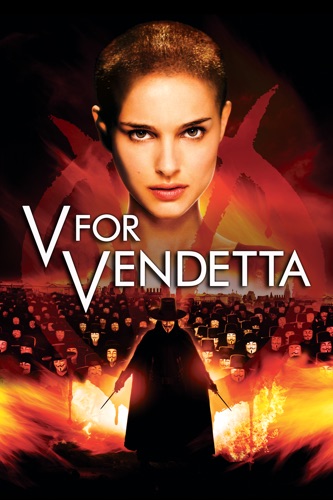