Based on a short story by the late Philip K. Dick, this science fiction-thriller reflects the writer's familiar preoccupation with themes of concealed identity and mind control. Tom Cruise stars as John Anderton, a Washington, D.C. detective in the year 2054. Anderton works for "Precrime," a special unit of the police department that arrests murderers before they have committed the actual crime. Precrime bases its work on the visions of three psychics or "precogs" whose prophecies of future events are never in error. When Anderton discovers that he has been identified as the future killer of a man he's never met, he is forced to become a fugitive from his own colleagues as he tries to uncover the mystery of the victim-to-be's identity. When he kidnaps Agatha (Samantha Morton), one of the precogs, he begins to formulate a theory about a possible frame-up from within his own department. Directed by Steven Spielberg, who hired a team of futurists to devise the film's numerous technologically advanced gadgets, Minority Report co-stars Colin Farrell, Max von Sydow, and Neal McDonough. John Anderton is a top 'Precrime' cop in the late-21st century, when technology can predict crimes before they're committed. But Anderton becomes the quarry when another investigator targets him for a murder charge. Minority Report Wiki

The system is perfect until it comes after you...

Badly executed, too big a gap in the cause and effect. It was easily refuted before the movie even gets to the point of the minority report.

Tom Cruise was arresting in this stunning Sci-Fi thriller with so many good visual effects, good casting choices and so many twists!.

It’s clear that Steven Spielberg has cemented himself as one of the most prominent sci-fi directors of all time with films like Close Encounters Of The Third Kind and E.T. The Extra-Terrestrial. With this film, he proves not only how much of a master he is in the genre, but proves how much of a master he is in filmmaking. To put it plainly, Minority Report is a suspenseful, well-paced, well-written and wonderfully made thriller with great visuals and shots, thought-provoking ideas and a really engaging story. The lead actors give great performances: especially Tom Cruise and Samantha Morton, who play the most important characters in the movie. Cruise gives a great performance action wise and acting wise as Anderson, and Morton’s performance as Agatha is just jaw-dropping: I kept asking myself “how come I don’t see her in more movies?” Although this is different from anything he’s done, the film still feels like a quintessential Spielberg film, and it’s probably up there with Jurassic Park and Close Encounters in my opinion. It’s smart, it’s intense, and it really stays with you long after the credits roll. If you’re looking for solid entertainment: look no further! This movie is a must see!

Loved every minute of this movie, highly recommended

SPOILER ALERT: In the opening scene the husband was thinking about killing his adulteress wife and her lover. Wasn't that the first crime? They didn't "see" that coming? The future of technology in the theatre can never equate with the reality. As always…it's GOOD fun in Hollywood with some popcorn just not in real life:)! Enjoy!

female69 - One of my favorite movies

One of my favorite movies

A masterpiece of terrifying, poignant, strange, and action packed film.

I love Tom Cruise. Usually his movies choices are spot on, but this was possible the most horrible movie in all of my 39 years of watching movies. I think the people who rated this movie 3 stars and up must've been trippin on something and saw a different movie other than this disaster.

P4PA515 - Even After14 Years Still Excellent

Even after fourteen years this film is still excellent. The tech in the film (excepting the precognition but) is astonishingly spot on. Hopefully the deeper message that we should not jump on tech bandwagons without seriously considering the consequences will be with use for a much, much longer time.

Great .. well worth the money!

If the precogs are never wrong, then how can arresting the person do anything if they are fated to commit the murder? If they can be wrong, then why is it so difficult for him to not murder the guy he's never met before? Kinda dumb.

Great movie. I can watch it over and over. Very inventive and interesting.

I have to admit, this was pretty good...especially as to the plot, was really mind-bending in some ways I should add, however, that there were some seriously big plot holes (Like why would they be accused of murder instead of attempted murder, how come this and that, etc.) but I don't think it detracts from the movie experience---it's a movie, everything that happened in it never existed anyways, so it doesn't matter that much

Awesome action movie that will keep you watching until its over

This movie is so so awesome.

This movie is on the charts again when it came out about 10 years ago?! Awesome. Great story, great characters( and actors). 10/10

I remember watching this movie when it first came out and saying "OMG I GOTTA BUY THIS $#!&!!!!". lol . It had so many Innovative action movie moments that other film makers had to step their game WAY up! This movie is a CLASSIC Tom Cruise flic.

One of those movies I can watch over and over again.

ramsackle - Great predictor of the future

This movie was made a while ago. And it anticipated the way our society is moving: Guilty before committing a crime. In a broad sense, our society has done this to men overall. For example, men are supposedly all conspiring to conduct a war on women. So, let's start punishing them while they are boys. ("Read The War on Boys" to get a perspective on that).

I usually don't like these types of movies, but this one it's a good movie, recommend.

Finally this movie is on iTunes!

by fredrico - One of Spielberg's most underrated films

Minority Report is everything that's right about a sci fi action film. It has great performances from Tom Crusie, Max von Sydow, Colin Farrell, and Samantha Morton. It has a facinating story filled lots of twists, turns, and suspence, not to mention it's smartly written. And best of all, it is visualy stunning. When this movie came out in 2002, Steven Spielberg and Peter Jackson had already mastered CGI, Jackson did The Two Towers with the brilliant CGI of Gollum. While other movies like Die Another Day, Spider-Man, and Star Wars Episode II suffered from awful CGI, Spielberg had already mastered it since Jurassic Park. And the end result is a smart action sci fi thriller that is completely underrated. Check it out, it's worth it

Tomorrow, I am getting money to buy this movie specifically. This is one of my all time favorites, and potentially my favorite Spielberg film. I am delighted to see that iTunes finally added this movie. I am so pumped to watch it over and over now that I will have the chance to watch it several times over...

One of Spielberg's better films, Minority Report has a lot to offer. Intelligent plot, an inspired vision of the future, and a fantastic film noir style, there is something for everyone to like in this one. Definitely worth a rent, if not a buy.

Tom Cruise owned every scene. Spielberg's directing rocks it and the story was fantastic!

I cannot stand Tom Cruise but this is in my top 20 fav movies ever!!

This is one of the best movies ever made ! From the futuristic vision, to the action to the well thought of and well executed story .. this film delivers suspense and Tom Cruise at his best. When i think of film that define the vision of the future i often think of this movie, original and simply perfect. Final Grade A

This one had me on the edge of my seat. This is one of Steven Speilberg's best.

One of the best Sci-Fi films ever made. Great acting, action and imagination all rolled into one, a definite must have in my book.

ben-zene - Been looking for this...

I expected this excellent movie would be on digital copy eons ago - but here it is! Awesome!!! The very future of interface design was born (well, visualized and popularized) right here.

Spielberg seldom disappoints and this is no exception. Again he starts by pushing you along one train of thought before taking you by the hand to the conclusion. He is indeed a master film maker.

Why can't I buy this movie?! I don't want to rent it, I want to own it... yet that option isn't available. It's also an archaic thought that you have to pay more for a slightly higher resolution version of that same movie. This is why people pirate. 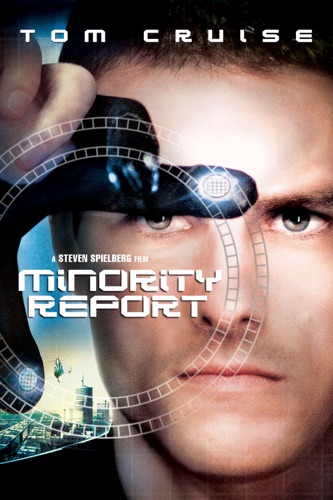