Michael Cera stars in a hilarious comedy about an obnoxious American and a girl named Crystal Fairy (Gaby Hoffman) who take a hallucinogen on a trip through Chile.

Jamie is a boorish, insensitive American twentysomething traveling in Chile, who somehow manages to create chaos at every turn. He and his friends are planning on taking a road trip north to experience a legendary shamanistic hallucinogen called the San Pedro cactus. In a fit of drunkenness at a wild party, Jamie invites an eccentric woman—a radical spirit named Crystal Fairy—to come along.

A very good film, not not strong as a "comedy"If you're expecting belly laughs, which I sort of was based on the promos I'd scene [and in part just because Cera is such a great dead pan and I personally just always found him funny and likable] you might be disappointed. It's definitely got a few laughs, but it's much more of a dramedy, and I think it works very well as an original take on a character's journey to discovery. A lot of the negative reviews probably really stem from expecting a comedic romp more like "This is the End" than the relatively cerebral and nuanced pic this is. But if you know that going in, I think most comedy lovers will have some laughs, be interested, and maybe even feel a little reflective after watching. I think the ending was just about perfect, just not in a typical Hollywood sense. More like in a J.D. Salinger sense..KevinsworthScore: 4/5

A Peaceful, Trippy Road TripI went in not knowing much about this movie. I thought it was a simple and heartfelt movie about people connecting and being transformed through sharing a drug-fueled day on the beach. I enjoyed how small and subtle it was. I thought the ending was wonderfully acted and filmed. I can see how this would be a difficult film to market. It’s not an event, it’s not easy to describe. It’s like a beautiful little poem. Thanks to the filmmakers. I had a lovely trip..NYChusbandsScore: 5/5

Really?Superficial. Thin on plot. Movie drags its feet to the point of being irritating and to make you want to turn it off. To note: how Hoffmann, who looks a lot like Frida Kahlo on the picture, handles her business and hangs in there. All else, not worth anybody's time, let alone money..Esau MagalhaesScore: 2/5 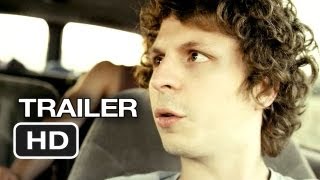 An award-winning festival favorite by Sebastian Silva ("The Maid"), NASTY BABY centers on Freddy (Silva), a Brooklyn-based artist who, with his boyfriend, Mo (Tunde Adebimpe), and their best friend, Polly (Kristen Wiig), is trying to have a baby. As this trio deals with the complications of conception and creating the "new normal" family, their bliss is clouded by a series of confrontations with an annoying neighbor who just might be a madman.

Tyler (Jason Mitchell, Straight Outta Compton) joins his friend on a trip to the mountains for a weekend birthday party with several people he doesn’t know. As soon as they get there, it’s clear that he’s the only black guest, or minority for that matter, and it’s going to be a weekend of heavy drinking. Although Tyler is welcomed, he can’t help but feel uneasy around a close-knit group of white guys. The combination of all the testosterone and alcohol starts to get out of hand, and a precarious situation starts to feel like a nightmare.

When Raquel's (Catalina Saavedra) place in the Valdes family -- for whom she's provided 23 years of maid service -- is threatened after they hire more help, she decides to do something about it in this Golden Globe-nominated comedic drama from director Sebastián Silva. Rolling out anything but the red carpet for the new employees, Raquel's juvenile tricks just might work in this examination of loyalty, family dynamics and duty.

A vacationing insomniac loses the ability to distinguish dreams from reality while traveling the Chilean countryside with a group of adventurers that includes her best friend and an enigmatic American in this downbeat saga. Though it came to the U.S. billed as a thriller or a horror picture, Chilean director Sebastian Silva's Magic Magic is more aptly described as a dark psychological drama with tense overtones. Juno Temple stars as Alicia - an emotionally fragile young woman in her early 20s with a murky history. She joins her cousin Sarah (Emily Browning), Sarah's boyfriend Agustín (Agustín Silva), the couple's eccentric friend Brink (Michael Cera) and Agustín's sister Barbara (Catalina Sandina Moreno) for a retreat in the countryside, but from the beginning, things don't go as planned. In the days that follow, more tension erupts between Alicia and the other members of the group, particularly Brink, who displays extreme anti-social tendencies and grows fond of malevolently pushing the girl's buttons. After Sarah returns, all hell threatens to break loose: Alicia is accosted by a local dog that attempts to copulate with her leg; Brink and Agustín play a dangerous game that threatens to cause Alicia grave physical harm, and it becomes increasingly apparent, throughout, that Alicia is now teetering on the brink of a full-scale mental breakdown, which terrifies the others.

Isadora and Enrique live a comfortable life. They have a modest apartment in Santiago's old downtown district. Well into their 80's, they both maintain their independence and live happily with their books, their eclectic art, and most of all with their beloved two cats. That is until, one day, the building's elevator breaks and unable to descend the ten flights down, Isadora is left a prisoner in her own home. At the same inconvenient time, Isadora's passionate "wild child" daughter Rosario and her butch female lover, Hugo, come for a visit with a new "scheme" of how to make them all rich. The one glitch is that the elderly couple must sign over the lease to their apartment. The war between mother and daughter escalates when Isadora, beginning to show signs of onset senility, has a near dangerous adventure and bravely journeys down ten flights and onto the crowded Santiago streets. Once rescued, mother and daughter and their respective spouses begin the slow process of forgiveness and begin to see a new future. Sebastian Silva and Pedro Peirano have made a touching film of black humor and pathos reflecting the often treacherous territory of mother-daughter relationships and the empathy needed to find a survivable neutral ground.

Comedy Knockout pits comedians against each other in a series of fast-paced challenges. In each episode, host Damien Lemon (Guy Code) sends three comics into a battle of high stakes comedic gameplay. The comedians throw roast-like, rapid-fire jabs at their opponents, and each show ends with one comedian crowned champion, one eliminated, and one forced to face the crowd to apologize for going down in shameful defeat.

Dive deep into the world of comedy with Gotham Comedy LIVE. Some of the funniest comics in America perform LIVE from the Legendary Gotham Comedy Club in New York.

In this celebration of the New York comedy scene, Ilana Glazer ushers in the return of comedy after a very dark year.

Comedy Bang!Bang! is back with two separate 10-episode volumes of all new episodes and a robust line-up of famous faces. Host Scott Aukerman and musical cohort Reggie Watts both return to Comedy Bang! Bang!, the show that infuses celebrity appearances and comedy sketches with a tinge of the surreal. Joining Scott and Reggie in the studio this season are Jessica Alba, Andy Samberg, Sarah Silverman, Jason Schwartzman, David Cross, Bill Hader, Anna Kendrick, Zach Galifianakis and more.

Discover the best in British Comedy from the BBC with this sampler playlist, a beginner’s guide to the greatest comedy to be found with an English accent this side of the pond. Whether you try being Absolutely Fabulous with Patsy & Edwina, spend a night at John Cleese’s Fawlty Towers, or check out Ricky Gervais’ original award winning version of The Office, you’ll find something you love in this hilarious collection of classic British comedy.