While babysitting two children on Halloween night, a young woman finds an old VHS tape in the kids' trick-or-treat bag. The tape features three tales of terror, all linked together by a murderous clown. As the night goes on, strange things begin to occur in the house. It isn't long before the babysitter learns the horrifying truth... the maniacal clown is slowly working his way into her reality.

While watching two children on Halloween night, a babysitter finds an old VHS tape in the kids' trick or treat bag. The tape features three tales of terror, all linked together by a murderous clown.

Funniest comedy I have seen in years!I laughed so hard, everything was so comical! The acting was so hammy it makes you roll your eyes in embarrassment, the anthology slant was unexpected and very clumsily attempted, and the “special effects” must have been done on a shoe-string budget. The script was a riot, with some very funny one-liners. Just a very funny film, overall. Wait, this was supposed to be a horror film? Get the %^&* out of here. This was garbage, from beginning to end. Nothing about this movie was even remotely well-done. The acting? Atrocious! The script? Embarrassing! The effects? Minimal and poorly executed. Just so very poor in every.single.way. Avoid this film like you owe it money..DatflybodyScore: 1/5

StupidI'm a huge horror fan and this film is ridiculous. The clown is a little creepy but that's about it. Acting is terrible. For instance, what sense does it make to stand there and watch someone's head be sawed off? Typical scenes are throughout, like someone crashing their car when trying to get away or cellphones not working all of a sudden when trying to call the police. Don't waste your money renting. I don't understand the 4 star ratings for this film..DrTMG2021Score: 1/5

This is a bad movieI hate this movie is bad and stupid..Rob Zombie films.Score: 1/5

WORST EVER!Please don't waste your money! There has never been a movie so Sh*#!y!!! Complete waste! Made ZERO SENSE and I mean ZERO!.GrvcmikeScore: 1/5

GREATI honestly Loved the Movie. There was nothing to really watch. If your into serious Blood and Guts and Suspense, The Rent is worth it. A MUST SEE!.SalinamariexoxScore: 5/5

Worth it!I've seen a bunch of horror films that have a few good jump scares but this is one of the first in awhile that was pretty scary. Definitely rent this and give it a shock. I promise it will freak you out! Very entertaining!.Trick001Score: 4/5

Worst movie everThis move did make me jump once but overall it was a waste of time and money wasnt very good.Killerkid77Score: 1/5

Poor picture qualityThe 2 stars is for the picture quality there is lots of static and scratches in the movie. The movie is good and Art the clown is my favorite character..Rickj122Score: 2/5

It's okI've seen a LOT of horror movies and this one is ok, I wouldn't recommend paying full price for it though. The trailer looked great in my opinion but the movie didn't live up to my expectations. It's similar to the VHS series in a lot of ways but it's not filmed in a found footage format..PhollyScore: 3/5

Worst Movie EVER!!!!!!!!!This was honestly hands down the worst movie I've ever watched. The trailer literally is the only good thing about this film haha. Dont buy******.K$NGScore: 1/5 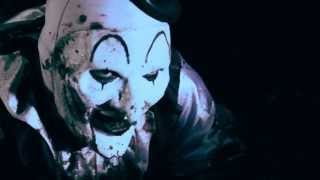 Come Out and Play...

A woman finds a VHS tape on her doorstep that shows a series of gruesome tales that could be real. But the true danger is the pumpkin-faced killer that’s using the tape to find his next victim.

The mummy of a cursed pharaoh and a reanimated corpse of a sadistic madman face-off in an epic showdown. Only an Egyptologist and a college professor, the deranged Dr. Frankenstein, may be able to stop the creatures before it's too late.

Art the Clown returns and sets his sights on three young women, along with anyone else that gets in his way.

After being resurrected by a sinister entity, Art the Clown returns to Miles County where he begins to target a teenage girl and her younger brother on Halloween.

Your worst fears, and then some, are realized as you relive terrifying stories of kidnappings. From a successful business man who is unknowingly ambushed by those who are in his inner circle, to a pregnant woman who is kidnapped for her unborn child, these stories will make you look twice around every corner.

Dating apps have become an increasingly popular way for people to connect. Elizabeth Vargas examines the largely unregulated dating app industry and explores the risks of dating online, which in some rare cases has led to assault, rape and even murder. Vargas explores this through interviews with lawyers, detectives & advocates, who hope that this will prevent future experiences & protect users.

Set in 1964, American Horror Story: Asylum takes us into a Church-run haven for the criminally insane, ruled with an iron fist by Sister Jude (Jessica Lange), a nun with a troubled past.

Their wildest dreams are your nightmares…. Showtime and Starz Media have amassed the greatest horror writers and directors of all-time to bring you a chilling anthology of hour-long films.

After 300 years of witches living in secrecy, new attacks have both threatened their survival and forced "gifted" girls to attend a special school for safety.

American Horror Story: Freak Show is the story of the performers and their desperate journey of survival amidst the dying world of the American carny experience.