Experience amazing action and all the Arnold you could ask for with the Commando Director’s Cut. When the daughter (Alyssa Milano) of former Delta Force Operative John Matrix (Arnold Schwarzenegger) is kidnaped by a brutal former team member seeking revenge, Matrix must travel to South America and do whatever it takes to get her back. Somewhere....somehow.... someone’s going to pay! John Matrix, the former leader of a special commando strike force that always got the toughest jobs done, is forced back into action when his young daughter is kidnapped. To find her, Matrix has to fight his way through an array of punks, killers, one of his former commandos, and a fully equipped private army. With the help of a feisty stewardess and an old friend, Matrix has only a few hours to overcome his greatest challenge: finding his daughter before she's killed. Commando (Director's Cut) Wiki

DanH88 - "Director's Cut" not worth the extra minute

While it's a good action movie, the Director's Cut isn't worth buying. I enjoyed Commando and re-bought the "Director"s Cut" thinking it might be worth it. I should have saved the cash! If you like quick flashes of cheap gory scenes, you may enjoy it, otherwise the standard movie is almost exactly the same movie. The gory parts would earn it an "R" rating. Although, all of the extra scenes combined adds about an entire whole extra minute. The added scenes range from seeing a flash of a saw blade hitting someone to the bone in an arm that just got cut off. It's low detail quick flashes. It's kind of embarrassing that they just didn't offer it with the real movie and that they actually charge for again for this version.

This has to be one of the best one-liner movies out. Non stop action with that 80’s L.A. feel. And it has tommy Chong’s daughter. Great flick!

Quintessential Arnold. Predator is good, but this is pure Arnold. He can smell guys coming! He likes Sully, so he’ll kill him later (when he’s back)! He eats too much red meat! Awesome action!

He eats green berets for breakfast, also enjoys chopping wood & having playful ice cream fights. He is a man of many talents, he will find you! Hes one gigantic MFer. He will kidnap you, ruin your car & make you fall in love with him. Then he'll take you shopping! Buy this movie, then go to your friends phone & buy it there. They will thank you later!

Such a great film. Highly recommend it. Just a good kick back and relax action film!

Icantbelieveitsnot.... - Deleted scenes? Yes, there is even more Commando!

This is a drinking game film. Every time you see a screw up in the film, you take a swig. From the magical Porsche that heals itself, to the cardboard cutouts of people falling and exploding, this IS the greatest movie of all time. This was the first film I ever watched as a teen that made me realize Hollywood CAN make screwed up movies that you will still love. There are at least 12 real filmmaker screwups or continuity errors that I remember that occur right before your eyes.... and you accept it.... because after all the explosions, deaths, and shots missed when taken at MR. Commando, if u still think that there is any reality in action films, you might need certain medication. Of course, we also watched WWF (as it was called then) and accepted it for it was...soooooo.... Enjoy this piece if nostalgia which if you watch with your eyes open, can be fun. Remember the drinking game idea.... you will have to watch it twice or more as you will not remember the ending...

This is one of the Best 1980s Action Movies of all time. It is also my Favourite Arnold Schwarzengger Movie as well. Here are the reasons why I love Commando: IT HAS SO MUCH ACTION, ARNOLD'S CHARACTER JOHN MATRIX IS BADASS, BENNETT WHICH IS THE VILLAIN IS SO FUNNY AND SAYS SOME FUNNY QUOTES, THE PLOT AND THE FINAL FIGHT AT THE END! Commando is filled with Non-Stop Action with some of the most badass and hilarious qoutes of all time. It is worth the movie to watch if you are an action fan!

This movie had a great plot, engaging and thrilling action sequences and humour. A great cinematic action picture. Worth watching. Worth 75%.

It was so good to watch this classic in HD. Arnold is at his absolute best. Great to see this film back in the iTunes top 10. Sit down and enjoy "let off some steam Bennett".

Waste of money even for big Arnie fans. Rip off!!!! A few extra lines of dialogue…"Directors Cut" only refers to the additional royalties I’m sure he will receive!

Pure, concentrated, Arnold. Commando is poetry; a piercing, searing vengeance. John Matrix' love for his daughter takes shape in an unstoppable and predictably brutal crescendo of death and justice wreaked upon a despotic ex-combrade who dared kidnap her as leverage for the political aspirations of a tinpot South American dictator. This is Arnold at his rawest – gone is the guile and tact of Predator, in its stead a bloody, cold, production-line pogrom of enemies. Like the preceding review states, this is his finest outwith Predator itself, and probably the quintessential guns, ammo, and revenge film. Five stars, because it doesn’t got to ten.

Essentially a perfect Schwarzenegger movie only beaten by Predator in my own opinion. The remastered directors cut is an essential purchase for every Arnold fan and all the gore and brutality edited out is now replaced in all its glory. The HD quality is amazing and the extras are brilliant too. 5 stars. A classic. 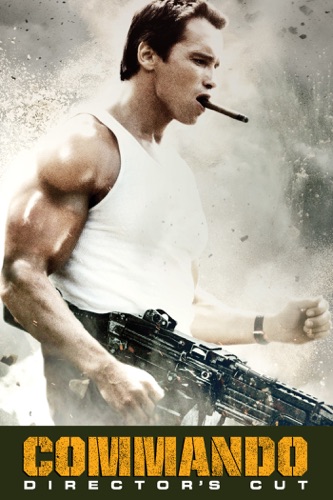