The show follows Eleanor Shellstrop, an ordinary woman who enters the afterlife, and thanks to some kind of error, is sent to the Good Place instead of the Bad Place, which is definitely where she belongs. While hiding in plain sight from Michael, the wise architect of the Good Place (who doesn’t know he’s made a mistake), she’s determined to shed her old way of living and discover the awesome (or at least the pretty good) person within. The Good Place, Season 1 Wiki

Everything Is Fine
Thanks to some kind of error, Eleanor Shellstrop (Kristen Bell), an ordinary woman, enters the afterlife and is sent to the Good Place - which is definitely not where she belongs. While hiding in plain sight from Michael (Ted Danson), the wise architect of the Good Place who is unaware that he's made a mistake, she's determined to shed her old way of living and discover the awesome person within. Helping Eleanor navigate her new surroundings are Chidi (William Jackson Harper), her kind, open-hearted "soulmate" who sees the good in people but finds himself facing quite a dilemma; her frustratingly perfect new neighbors, Tahani (Jameela Jamil) and Jianyu (Manny Jacinto); and Janet (D'Arcy Carden), a walking, talking source for all the knowledge in the universe.

What We Owe to Each Other
Eleanor (Kristen Bell) is enlisted to help Michael (Ted Danson) with an important task that could determine her fate in the Good Place. Meanwhile, Chidi (William Jackson Harper) agrees to be the third wheel in an effort to help out his friend. Jameela Jamil, Manny Jacinto and D'Arcy Carden also star.

The Eternal Shriek
Eleanor (Kristen Bell) and Chidi (William Jackson Harper) set off on a quest with Janet (D'Arcy Carden) as their guide. Meanwhile, Tahani (Jameela Jamil) attempts to show Michael (Ted Danson) how much he is appreciated.

Most Improved Player
Michael (Ted Danson) has a private meeting with Eleanor (Kristen Bell). Meanwhile, Chidi (William Jackson Harper), who has been harboring a secret, contemplates what to do.

...Someone Like Me as a Member
Michael's (Ted Danson) skills are put to the test when he attempts to sort out an unprecedented situation. Meanwhile, Chidi (William Jackson Harper) makes a connection elsewhere, much to the dismay of Eleanor (Kristen Bell), while Janet (D'Arcy Carden) shows a different side of herself.

Michael's Gambit
Eleanor (Kristen Bell) and her friends contemplate their fates in the Good Place.

Sneak Peek
The Good Place is a new comedy about good people … and not-so-good people - starring Kristen Bell and Ted Danson. Get a first look with this special sneak peek.

What do you think The Good Place, Season 1 tv serie? Can you share your thoughts with other peoples?

The show is great, but these 22 minute episodes omit the lengthier scenes you see when watching them on Hulu or the NBC website. While still great material, it's frustrating that the "Extras" included are worthless, and the episodes themselves have edited out good scenes I recall seeing. Frustrating because the show is so good.

IM OBSESSED and so far the people who I have recommended this show to, have loved it as much as I have!!

Kattttt123 - it is Even better Than season 1

With all the garbage happening in the world This show is worth Owning. It takes us somewhere out of the Rotten News Cycle to the Good Place/Bad Place an a Medium Place...This show is the best and this "Forking Bullshirt Bench" may never cuss again ;)

It’s hilarious and fun and has some great lessons hidden inside as well. I hope this show gets 5 more seasons cause it’s the perfect pick-me-up after a long stressful day

I love this show. So funny! What a terrific cast!

We love this show. We like that it's clean, which adds to its humor, and we love the cast. Funny premise!

This is such a great show! It's witty, quirky, and original with dynamic characters and a fantastic story arc. I absolutely cannot wait until Season 2!

GOLD ENCHANTMENT - Worth your money

The characters are very original and different. The show is original. Nothing like it. It has an amazing plot. I definitely recommend you spending your money on the good place.

Watch the whole season in its entirety! If you have ever read Jean Paul Sartre's NO EXIT,Chapter 13 episode will mean a lot more to you! Cerebral comedy in the guise of randomness!

This show is good and I hope that they'll continue to make this show ❤❤ this Show.

This show is so original. It is so refreshing to see a show that is not a re-make or based on something. This show is very funny and very intelligent. I love it.

Datsotfoplorts3on - Give it a shot

This show turned out better than I thought. It is quirky, has good acting, good characters(the characters of Michael and Janet are the gems of the show), location is amazing, good quirky humor, and is a nice refreshing look at the afterlife.

The first couple of episodes were original. After that, it became a one joke show.

On so many levels: trash

Love it! Fun characters and so funny

I love this show, it like nothing else on tv. In a short time the characters have become endearing, and each episode ends with enough intrigue that I can't wait for the next week. I hope it catches on because it's a nice quality show!

It's not a good show it's the BEST show!

I loved this show until the Chapter 2 second episode, when Ted Danson kicked a tiny Maltese dog - what????? And it was supposed to be funny? Excuse me??? Kicking a dog is horrible, and Ted Danson and NBC should publicly apologize for this. People watching the show may get the idea that it's okay to kick or otherwise abuse dogs and other animals. I can't believe that an otherwise brilliant show would stoop so low!! I can't believe Ted Danson, who has worked so hard for ocean conservation would agree to kick the dog in the show. Even though it's 'make believe,' scenes like that do influence people. Shame-shame!

Kristen Bell is incredibly funny. The whole premise is so original. Ted Danson is fantastic.

Very odd and made no sense and i didn't understand the show. She picked a bad show to star in and i do not see it lasting much longer.

Condescending and obnoxious. Full of PC stereotypes. Not recommended. Cute concept but the writers are here to morally 'educate' you.

Will continue to watch it. :-)

afarag - Best most funny funniest thing funny EVER EVER EVER 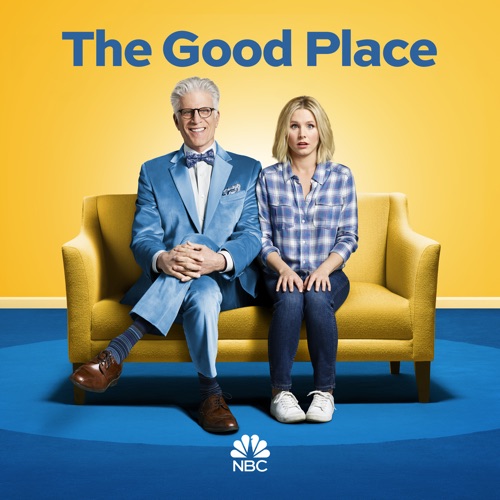