PAW Patrol is a CG action-adventure preschool series starring a pack of six heroic puppies led by a tech-savvy 10-year-old boy named Ryder. With a unique blend of problem solving skills, cool vehicles and physical humor, PAW Patrol is sure to keep preschoolers engaged as they work together to protect Adventure Bay. PAW Patrol, Vol. 6 Wiki

Tracker Joins the Pups!
Ryder and the pups are on their way to the jungle to help Carlos move a massive relic to the museum. When Carlos falls into a deep pit, he is saved by a big eared pup named Tracker.

Parroting Pups / Merpups Save the Turbots
Rocky loses his voice and can’t bark out his puppack tools, but Matea the parrot has no problem doing it for him. If only she did it at the right time! / The Magical Mer Moon means the Merpups are back, only this time they’re helping the PAW Patrol on a rescue.

Pups Save a Robosaurus / Pups Save a Film Festival
Earl, a homemade Robotic Dino, comes to life and lumbers across the desert in the middle of the night. The pups need to find him, stop him, and bring him home. / The pups are shooting their Film Festival entry until Daring Danny X cuts the action with his own dangerous stunts.

Pups Save a Stinky Flower / Pups Save a Monkey-Naut
Mayor Humdinger drops off a 'gift' to Mayor Goodway, a flower that spreads a horrible stink when it blooms. / A UFO has just splashed down in the bay!

Pups Bear-ly Save Danny/Pups Save the Mayor's Tulips
Daring Danny X is at it again! This time he’s stuck high in a tree over a deep canyon and is hotly pursued by hungry bears. / Mayor Humdinger uses his Kit-tastrophe Crew to sabotage Mayor Goodway’s perfect petals for the tulip contest. Night guards Rocky and Chase to the rescue!

Pups Get Growing/Pups Save a Space Toy
Fertilizer causes Yumi’s crops to sprout humongous veggies. Ryder and the PAW Patrol corral the stampeding produce before someone gets squashed! / The PAW Patrol draws a message on Farmer Al’s field to let their friends the Space Aliens know the pups found their lost toy!

Pups in a Jam/Pups Save a Windsurfing Pig
It's the annual Jamboree Jamfest, but all of the fruit is carried off by ants! / Zuma is on a wacky windsurfing water rescue after Cornelius the pig decides to go for a ride on a borrowed windsurfing board.

Pups Save the Gliding Turbots/Pups Save a Plane
When Francois and Cap'n Turbot become stranded on a remote island, Ryder and the pups fly in to the rescue.It's a double daring mid-air rescue as Mayor Goodway's first flying lesson goes sideways.

Pups Get Skunked/Pups and a Whale of a Tale
When Everest gets sprayed by a skunk, the pups delicately try to tell her she needs a bath!The pups put a new spin on freeze tag after they fly far north to help free a baby whale.

The Pups Winter Wonder Show
The Adventure Bay Snow-Show is in danger of being a No-Show when Mayor Humdinger escapes with the feature act, Cap'n Turbot's performing penguins. It's up to the Paw Patrol to return the penguins so that the show can go on!

Pups Save a Giant Plant/Pups Get Stuck
Mayor Goodway's gesture of goodwill gift grows wildly out of control when it's planted in the wrong place. Time for a transplant!Metal mayhem ensues when Marshall's Fire Truck becomes mysteriously magnetized.

Pups Raise the Paw Patroller / Pups Save the Crows
Daring Danny's at it again! Luckily the Pups raise their rig after Danny sinks the Paw Patroller.Ryder and the Pups pair up with Alex and his mini patrol to retrieve mysteriously missing items.

Pups Save Floating Friends / Pups Save a Satellite
The aliens' spaceship is on the fritz and shooting out anti-gravity rays. A satellite is out of orbit and falling towards Adventure Bay!

What do you think PAW Patrol, Vol. 6 tv serie? Can you share your thoughts with other peoples?

The concept is so STUPID that it sounds like it was my by a person sitting on a toilet in 2 Minutes. The theme song is annoying. Paw patrol just feels like a Stupid power ranger and Scoopy doo Ripoff for some weird reason.

I love every moment in paw patrol

This doesn’t sort properly when purchased on the iPad. Why? How can I fix this?

not working! shows 30 seconds only. please fix it! this keeps happening!

Noodle eater0067 - My little cousin could watch this

So can I It's the best show 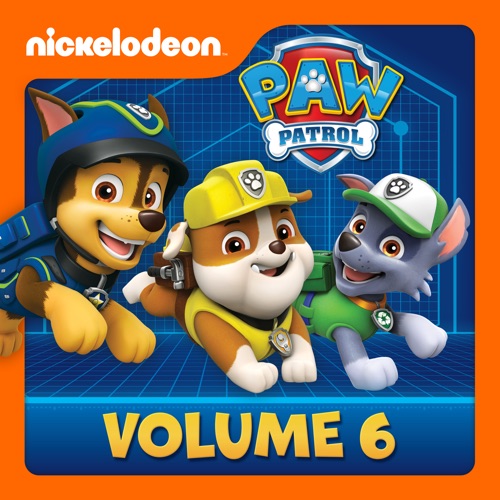