Pups Save the Bunnies / Puptacular
Farmer Yumi's carrots are disappearing and she calls Ryder and the Paw Patrol for help. / Katie is excited to be entering one of the Paw Patrol pups into a puppy grooming competition "Puptacular" in the next town.

Pups Save the Easter Egg Hunt
It's Adventure Bay's annual Easter Egg hunt and the pups are helping Mayor Goodway with the egg decorating. The hunt for a very special egg leads Ryder and the Paw Patrol on an exciting adventure!

Pups Save a Stinky Flower / Pups Save a Monkey-Naut
Mayor Humdinger drops off a ‘gift’ to Mayor Goodway, a flower that spreads a horrible stink when it blooms. Mayor Goodway tries to return it to him, but runs into trouble and has to be rescued by the Paw Patrol. / A UFO has just splashed down in the bay! When Ryder and the pups pop the hatch, they find a monkey astronaut with a broken spacecraft and no way back into space. It’s the Paw Patrol to the rescue!

Pups Save a School Bus / Pups Save the Songbirds
When all the tires on the Adventure Bay school bus blow out, Rocky has to help repair them. Meanwhile, the kids still need to get to school, so Ryder volunteers to use the Paw Patroller as a substitute school bus. / Mayor Goodway and her twin niece and nephew are out “bird listening” for the famous singing songbirds of Adventure Bay. But what they discover are nests with eggs and a whole bunch of missing mother songbirds!

Pups Bear-ly Save Danny / Pups Save the Mayor's Tulips
Daring Danny X is at it again! This time he’s stuck high in a tree over a deep canyon and is hotly pursued by hungry bears. / Mayor Humdinger uses his Kit-tastrophe Crew to sabotage Mayor Goodway’s perfect petals for the tulip contest. Night guards Rocky and Chase to the rescue!

What do you think PAW Patrol, Springtime Saves tv serie? Can you share your thoughts with other peoples? 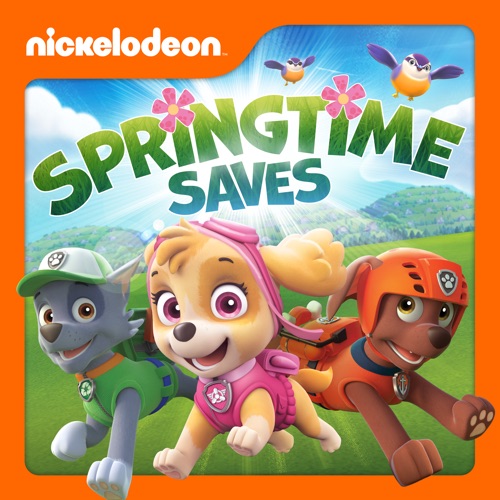