Izuku has dreamt of being a hero all his life—a lofty goal for anyone, but especially challenging for a kid with no superpowers. That’s right, in a world where eighty percent of the population has some kind of super-powered “quirk,” Izuku was unlucky enough to be born completely normal. But that’s not enough to stop him from enrolling in one of the world’s most prestigious hero academies. My Hero Academia Uncut, Season 1 Wiki

Izuku Midoriya: Origin
Izuku Midoriya desperately wants to be a hero, but he is one of the few in his generation born without a Quirk. Will meeting the number one hero, All Might, change his fate?

What It Takes to Be a Hero
Izuku accidentally learns of All Might's secret, but there's trouble in town again before Izuku has time to process it. Will All Might be able to save the day again?

Roaring Muscles
All Might tells Izuku that he can become a hero, but does he really have what it takes to become one?

Start Line
At the entrance exam, Izuku falls behind as the other students defeat faux villains left and right. Will he be able to get enough points to pass?

What I Can Do for Now
It's Izuku's first day of high school, and he still can't control his new Quirk. Will he make it to the second day of school with his eccentric new teacher?

Rage, You Damn Nerd
Izuku somehow gets through his first day of school and falls into a regular schedule of classes and training at U.A. In their first class with All Might...

Deku vs. Kacchan
Izuku is up against Katsuki in their first class with All Might! Can he and Uraraka beat the villain team of Katsuki and Tenya before time runs out?

Bakugo's Start Line
After the combat training lesson, the students and All Might reflect on their matches as they think about their next steps.

Yeah, Just Do Your Best, Iida!
Class 1-A has to elect a class representative, and everyone wants the job! How will they choose? And what lies in wait for them at the next class?

Encounter with the Unknown
Villains have attacked USJ, and it's up to Class 1-A to stop them. What are the villains after? Will All Might be able to save the day again?

Game Over
The students of Class 1-A are up against the League of Villains. Will they survive long enough for help to arrive?

All Might
All Might has finally shown up, but will he be able to defeat Nomu and save the day?!

In Each of Our Hearts
As the battle at USJ winds down, Izuku and All Might think about its repercussions. Meanwhile, the villains slink home to plan their next move.

What do you think My Hero Academia Uncut, Season 1 tv serie? Can you share your thoughts with other peoples?

DenkiBNHAkaminari - THIS IS THE BEST ANIME ICE EVER SEEN!!!

I watched stuff like Haikyu and assassination classroom, but this absotutely tops them all!

Jamesrocky122222 - Could ask for a better show to binge

One of the best shows since DBZ. Inspiring, entertaining and just a great feeling when you walk away. Can’t wait for more!

Never gets old! Got my mom to watch it too (she doesn’t usually watch anime) but she loved it!

I was a big fan before, but I couldn’t watch the episodes in order. Then I realized I could buy it, and now... I can’t stop rewatching. It’s addicting! You watch one episode, and then you have to watch the rest. Also BTW it’s the English Dubbed version.

There are still more seasons waiting to be put here on iTunes that are English Dub. Please hurry and put them all on.

This show just gets better and better!

It’s a fighting anime but no overwhelm bloody scenes. A lot of good lesson. I like it. I also like the English DUB, however, the young male voice sounds very similar with each other. Huhmmm?

I don’t do reviews often but I feel this show is deserving of one. It’s action packed enough and humorous enough to satisfy. I feel bad though about the people who have given it bad star ratings simply for not being in Japanese, if you preview the episodes it clearly shows that it’s in English. Also the show itself is not not worse because it’s not in your language of choice, just think and do your research before you purchase. All in all this show is entertaining and it’s IN ENGLISH.

I can watch it over again, and not get bored. It's one of those anime that you should really give it a chance if you haven't seen it . The whole story of Izuku trying to become a hero when everyone tells him no is inspiring.

When I heard about this show, I had low expectations and interests about it…and so I give this show a rate of ∞ out of 10…I'd give infinite stars too but the limit is only 5…LOVE THE SHOW

Love this anime! Perfect blend of action, comedy, suspense, and the animation is amazing!

The show is fine, but I think Funimation could be more clear in their marketing that this is the English dub version of the Anime. I'm not sure how shoppers are supposed to infer this from "Uncut"...

Can there please be more episodes?

sheenacat illustrations - Is this in...

Eager Beager - Not quite uncut

Two things about the dub: 1) the voice acting was better in the original Japanese, and 2) they tweaked the dialogue slightly by removing a key Uraraka line, "Deku kinda sounds like 'can do'," which was an important motivation for Deku to lay claim to what was originally meant as an insulting nickname. 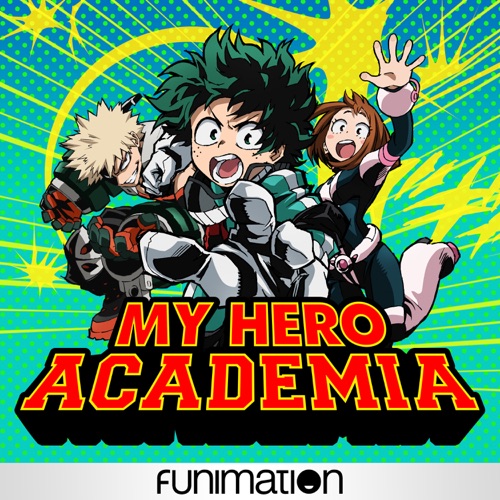