From executive producer Michael Schur (“Brooklyn Nine-Nine,” “Parks and Recreation” and “Master of None”) comes a smart, unique new comedy about what makes a good person. The Good Place, Season 2 Wiki

Everything Is Great!
Having had their memories erased by ambitious master architect Michael (Ted Danson), Eleanor (Kristen Bell), Chidi (William Jackson Harper), Tahani (Jameela Jamil) and Jason (Manny Jacinto) again settle into the Good Place, unaware of what has previously transpired...except that Eleanor discovers the one clue she had left for herself and attempts to piece things together.

Existential Crisis
Tahani (Jameela Jamil) throws a dinner party to impress. Eleanor (Kristen Bell) and Jason (Manny Jacinto) both have to lend a hand when things don't go as planned.

Janet and Michael
When the Neighborhood experiences a small glitch, Michael (Ted Danson) has to resolve the issue with Janet (D'Arcy Carden) before it gets out of control.

Best Self
Michael (Ted Danson) finds himself in a bind. Meanwhile, Eleanor (Kristen Bell) sparks an idea that has Chidi (William Jackson Harper), Tahani (Jameela Jamil), Jason (Manny Jacinto) and even Janet (D'Arcy Carden) laying their feelings on the line.

The Burrito
Eleanor (Kristen Bell), Chidi (William Jackson Harper), Tahani (Jameela Jamil) and Jason (Manny Jacinto) consider just how much they have (or have not) improved. Michael (Ted Danson) is left to deal with the consequences of his recent actions.

Somewhere Else
Michael (Ted Danson) tries to pull a rabbit out of a hat.

6 Awesome Moments
Holy shirt, that’s a lot of funny. Get prepped for Season 2 with some of the funniest and most quotable moments from Season 1.

What do you think The Good Place, Season 2 tv serie? Can you share your thoughts with other peoples?

Why would I need any other show? This show is perfect. It has a lovely mix of humor and intelligence. Enjoy!

Absolutely, one of the funniest television programs on tv. While I was recentlyly ill this program helped pass the time from my feeling like crap. Funny, odd, great characterizations, NBC has finally found the perfect mix of odd-ball tv. My Favorite Eposides to date are Janet and Michael, Derek, and Somewhere Else. Must see TV finally has returned!

Love the casting for this. Ted Danson and Kristen Bell are so funny together! Just a fun premise that you don’t have to take seriously.

Dope. If u hate u have issues in ur life

born_stupid - So funny, so smart

The best writing on TV, with a crackling comedic cast to deliver it.

Great show, well-written, funny, and every half season or so they throw out and replace a big chunk of the premise. This should be off-putting but the twists and turns are truly clever and well-earned. One of the best. (Here's hoping there isn't a six-day delay when posting future episodes as there was with episode 9.)

where is episode 9????? One star for Itunes incompetence, the show is forking great.

Where is the January 11th episode? It aired 5 days ago, and those of who actually paid for it can’t see it yet?

It came out last week and still isn’t on iTunes.

I saw the first season on Netflix and loved it. I hope we get 5 more seasons after this one!

What an original, enjoyable and funny show.

If you're not already watching The Good Place, go ahead and call in sick so you can bingse S1. It really is that good...

This show is a little slice of comedic heaven! Kristen Bell and Ted Hanson are just perfect! You won’t regret watching this!

I love this show!!! I love the humor.

I LOVE The Good Place- there is simply nothing else on the market quite like it. It is odd at times, but the genuine theme makes the oddness exceptionally enjoyable. The plot-twists are unprecedented, yet refreshingly believable and backed-up by the entire storyline. I highly recommend for a quick, entertaining show for curious individuals. 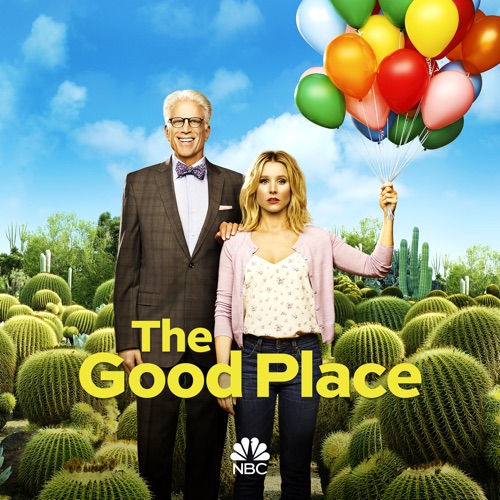