In the critically-acclaimed drama’s fourth season, Chuck’s death catalyzes Jimmy McGill’s transformation into “Saul Goodman.” In the wake of his loss, Jimmy takes steps into the criminal world that will put his future as a lawyer — and his relationship with Kim — in jeopardy. Chuck’s death deeply affects former colleagues Howard and Kim as well, putting the two of them once again on opposite sides of a battle sparked by the Brothers McGill. Meanwhile, Mike Ehrmantraut takes a more active role as Madrigal Electromotive’s newest (and most thorough) security consultant. It’s a volatile time to be in Gus Fring’s employ, as Hector’s collapse sends shock waves throughout the Albuquerque underworld and throws the cartel into chaos — tearing apart both Gus’s and Nacho’s well-laid plans. While Gus changes course, Nacho finds himself in the crosshairs of deadly forces. Better Call Saul, Season 4 Wiki

In Season 4, in the wake of a loss, Jimmy takes steps into the criminal world that will put his future as a lawyer — and his relationship with Kim — in jeopardy.

1 - Smoke
In the Season 4 premiere, Jimmy struggles to cope with Chuck's tragic death; Mike ponders his role at Madrigal; and Howard makes a startling confession.
2 - Breathe
Jimmy seeks new employment. Gus navigates the fallout from Hector's collapse. Kim endeavors to support Jimmy in the wake of Chuck's death.
3 - Something Beautiful
Jimmy puts a risky plan into motion. As alliances shift, Nacho finds himself in the crosshairs. Kim contemplates her future.
4 - Talk
A restless Jimmy embarks on a new endeavor while Mike burns bridges. Kim pursues her bliss. Nacho tries to survive a turf war.
5 - Quite a Ride
Jimmy identifies a new market for his talents. Mike vets a potential partnership. Kim drives a hard bargain.
6 - Piñata
While Jimmy daydreams about reconstituting Wexler-McGill, Kim sets out to secure her own future. Mike puts a plan into motion for Gus.
7 - Something Stupid
Jimmy expands his business, but runs into a problem that only Kim can solve. Gus intervenes in Hector's medical care. Mike deals with a setback.
8 - Coushatta
Jimmy goes to great lengths to right a wrong, as Kim pulls out all the stops for a case. Mike lets his team blow off steam. Nacho receives a visitor.
9 - Wiedersehen
Jimmy and Kim unburden themselves, risking their relationship in the process. Nacho is forced to make the rounds with Lalo. Mike has cause to worry.
10 - Winner
Jimmy turns the page on his reputation. Lalo tracks a loose end in Gus' operation. Mike is forced to make a difficult decision.
11 - Better Call Saul: A Look At Season 4
The cast and creators discuss how the darker, psychological new season sets Jimmy on a path toward Saul Goodman

Great direction, intense moments though scattered; seems like the best parts are when it’s not about Jimmy (Saul); finally...too many idle parts...I guess it’s “art” part of the show...but this is not a Picasso, This is entertainment. BB pulled it off nicely. The magic is not in this series.

Boshprimusik - Is just keeps on getting better

I love to season,The way I can feel like im watching breaking bad is just awsome

This was boring and slow.

This is one of the few shows on AMC that is spectacular. This show has an amazing storytelling and great cast. This was a great season, but it did feel a bit short with only 10 episodes, and with a cliffhanger that you wish you could go forward in time to see what happens next.

Not sure why they produce few episodes and even the few are wasted with idle scenes and all. No longer watching

This season is way better than the rest. I'm down to the last two episodes when I say this. Odenkirk is on. He'sno longer to gimmicky is his 'never meant to be a long term character' from breaking bad. Nearly perfect, but still some of the brief appearances are from not so great performers.

This show is done. This season proved it. I’m done. I’m out.

Nothing happens until the 5th episode. I've watched every episode of Better Call Saul and it never fails to disappoint but this season is a slow waste of time..

sowhatyouwilllive - Time to stick a fork in it - boring

Loved the first three seasons. I'm about four episodes behind right now because the storyline, while not bad, just isn't that interesting. Wrap it up.

It just gets better and better.

Or I imagine it must be so, since Apple decided to protect us HD Season Pass purchasers by eliding it from our subscription.

sparks chew - May I have a refund?

Come on iTunes and post the season finale. Dammit!

Where is Episode 10. This is unacceptable. Paying customer

WHERE THE HELL IS THE EPISODE - PUT UP THE FINALE

PUT THE SEASON FINALE ON WE SPENT OUR MONEY ON THIS, THAT IS A JOKE, I HONESTLY DEMAND A REFUND I HAVE A BUSY SCHEDULE I SPEND MY MONEY TO WATCH AT MY CONVENIENCE, PUT THE EPISODE THE HELL UP!!!

Blimey I am waiting for finale

wildjagd - Best of the best

Quite simply, one of the greatest television shows ever.

Better Call Saul gets 5 stars. Apple gets 0 stars and is in danger of losing a customer. I will be shopping around before I buy another season pass for any TV shows.

Where is season finale?????

michaellacymande - Where is the season finale.

Where is the Season finale??? It’s out on Amazon already!!!!

Arrrgghh! I want to see it!! Apple: release it!

Anybody there? Where’s episode 10? Note to self: stop buying season passes on iTunes.

Weird, where is episode 10?

TicketToRide - Finale is no-show next day

Love this show. Some people mistake nuance and character development for “slow” As to the fact that iTunes is late in posting the finale, they do this at some point with all of their content, without explanation. That’s why I am ceasing to buy seasons from ITunes. The finale is posted on Amazon. They have never been late on an episode on any show, and the prices are the same.

I am very disappointed w/iTunes. Where is the season finale?

Paid for the full season, but I don’t get the last episode finale? What a ripoff....

Why has it not yet been posted?

Where is the finale? Come on.

Nienor N - Season 4 finale not up

False advertising. Why offer the whole season without the season 4 finale?

Great show, but where is the finale?

ListenerD - Seriously it's 12 hrs past the release time...

Finally signed up for Amazon Prime....I won't be practicing BCS under the name iTunes anymore...

It happens every now and then that iTunes really drops the ball. They haven’t posted the season finale yet, BUT AMAZON PRIME HAS!!

ScottBtotheS - Where is the final episode? Amazon has it available

Why is Apple sucking on getting this episode posted? Sheesh!!

Honk Schrader - S4 Finale has not been uploaded!!!

You know, iTunes, we are paying customers. We paid for this show and you have not (yet) uploaded the S4 finale. It is now almost 1pm CST on the next day. If (if) there is some sort of technical problem - or an issue with the content producer - the least you could do is send us all emails, explain that you are aware of it, taking care of it and will upload the episode soon. But no, just leave us hanging. It's cool. We're only your customers.

CatherineD - Where is the seaon finale?

When will it be available?? Purchased the season and all but that episode are available

Rounder22 - Lots of lag between availability

If the availability of these episodes is indicative of Apple’s streaming capability, invest in Netflix

Why can’t I download the season 4 finale? It was supposed to be available around midnight and I see nothing so far. This happens quite a bit.

MorningGlory6 - WHERE IS THE FINALE

Toklife - Where is the finale?

iTunes, please don't forget to post the last episode. Come on I have been waiting all week for this.

Dovic - Huge BB fan but can’t get into this

I’m giving it a lot of stars because I have been a Bob O fan since Mr Show over 20 years ago. Huge Breaking Bad fan. This show is soooooo slow though. It’s not exciting but the nostalgia of Bb is hard to resist.

This show has made long strides from where it started in season 1. Brilliant, absolutely brilliant characters with a well timed pace story and great plots and storylines of our main characters. Season 4 is nearing it’s end now and every episode this season has been extremely enjoyable. The only downside is the fact that I have to wait an entire week for a new episode. To all those viewers that haven’t seen this show or quit in an earlier season, I recommend you give this show another chance! You won’t regret it. A little bit of patience with this show will go a long way I promise. The character development in this show is amazing and the cinematography...I mean I can go on and on. Looking forward to season 5 and onwards!

I hope they create another show that explores what happens after BB.

This season has gained even more momentum and spark! Better Call Saul incorporates some of the most creative writing and direction, making it a cerebral adventure. The actors are simply on-point and truly engaging. BCS os simply entertaining!

Breaking Bad continues, love it 🙂 Bob Odenkirk, Jonathan Banks, Giancarlo Esposito, the new member Rhea Seehorn and the rest of the cast and crew are doing an amazing job 🙏

I just wish there were more episodes per season, but I'll take quality over quantity.

Season 4 so far is just amazing! Great to see some of the Breaking Bad characters being introduced this season. Cannot wait how this season ends and whether the cab driver will be Jimmy's undoing!

Rbeals76 - One of the greatest slow-paced dramas EVER!!

This show is every bit as enthralling and satisfying as B.B. The familiar characters are comforting. The new characters are gracefully compelling and subtly powerful in the way they deliver the intricate stories that bolster the whole experience. This show is worth watching even if you don’t know who Heisenberg is... but why would you not know that already?

I recommend watching it on AMC, I bought the season pass so I have to wait for itunes to release it.

Beautifully shot, amazing actors, and above all, spectacular writing. It has a unique charm and feel throughout all of the seasons that rivals that of even Breaking Bad, the show’s older brother.

The best show currently airing on tv just got even better

@NetflixIndia Please let me see season 4 of better call saul so that i can also retweet. Only 3 seasons avaialble o…

Been on an unholy binge of Breaking Bad and now Better Call Saul. Honestly never thought I'd be that into Saul with…

@Epiloguers From those 4? I haven't seen The Handmaiden's Tale but Dark has had 2 excellent seasons. Westworld lost…

I liked Breaking Bad but was never a very big fan. Twitter convinced me to watch Better Call Saul. Am towards end o… 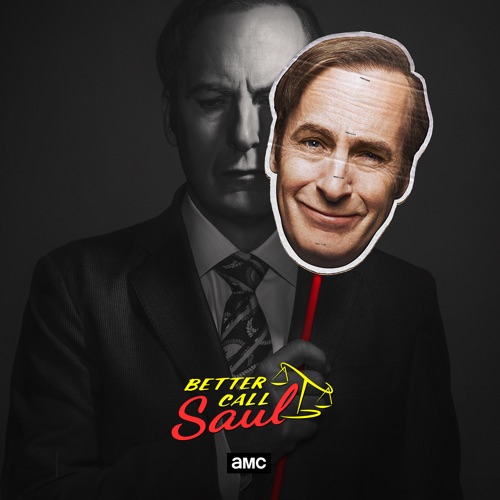