Mayans M.C. is a drama series from Kurt Sutter and Elgin James, and is the next chapter in the Sons of Anarchy saga. Set in a post-Jax Teller world, EZ Reyes is a prospect in the Mayans M.C. charter on the Cali/Mexi border. Now, EZ must carve out his new identity in a town where he once was the golden boy with the American Dream in his grasp. Produced by Fox 21 Television Studios and FX Productions. Mayans M.C., Season 1 Wiki

Mayans M.C. is the next chapter in Kurt Sutter's award-winning Sons of Anarchy saga.

Set in a post-Jax Teller world, Ezekiel "EZ" Reyes is fresh out of prison and a prospect in the Mayans M.C. charter on the Cali/Mexi border. Now, EZ must carve out his new identity in a town where he was once the golden boy with the American Dream in his grasp.

1 - Perro / Oc
EZ’s fate is in flux as the M.C. and the cartel find a common adversary.
2 - Escorpión / Dzec
The Mayans seek answers from a local crew as the Galindo worlds north and south of the border collide.
3 - Búho / Muwan
The M.C. alliances are tested and the Galindo family adopts unconventional methods.
4 - Murcielago / Zotz
A new threat in Santo Padre presents the Mayans new obstacles and opportunities.
5 - Uch / Opossum
A new deal requires a dangerous favor in Santa Madre.
6 - Gato / Mis
EZ continues to prove his worth as a prospect, as both sides of the border must grapple with harsh realities.
7 - Cucaracha / K'uruch
New secrets are brought to light, putting the M.C. at odds.
8 - Rat / Ch'o
EZ’s past continues to haunt him, but present horrors give him a new perspective.
9 - Serpiente / Chicken
The bond of the Reyes blood is fractured, and the Galindo family decides to cut their losses.
10 - Cuervo / Tz'ikb'uul
The club has reason to celebrate, but big changes leave the future uncertain.
11 - New Series Mayans M.C.
Catch a sneak peek of Mayans M.C., the next chapter in Kurt Sutter's award-winning Sons of Anarchy saga.
12 - Inside Look: Meet the Brotherhood
Get an inside look at the brotherhood that formed as the cast worked together to make Mayans M.C. come to life.
13 - Inside Look: Mayans Organizational Structure
Different motorcycle clubs have different structures. Kurt Sutter and the cast explain how the Mayans M.C. are organized.
14 - Inside Look: Latin Pride
Get an inside look at the Latino culture within Mayans M.C.
15 - Inside Look: Art Saves
Hear Richard Cabral and Clayton Cardenas’ stories of how acting changed their lives.

anniesprinkles - This show is da Bomb

Even though this show uses both English and Spanish conversations, I love how the writers balance it out. This series is awesome, can’t wait till season 2. You must buy season 1 and become a fan, guarantee you’ll be binge watching after the first episode.

What’s the ending episode for season 1?

Interesting start to the series. I think it's got GREAT casting, awesome writing, directing, and isn't SOA 2.0. My hope - is to bring the story much more into the dynamics of the club. Bring in back stories for the President and the rest of the club. Coco's story is solid one. Keep it going! What made SOA so likeable for me - was the comraderie and bonds we felt within all of the members, not just Jax's story. I want to know more about the backstory of Mayans M.C. - and maybe some of that could be delivered via narration. How did Angel get involved with the MC? Why isn't their father in the Mayans? I'll say this...it's got me wanting to come back for more. Just please don't kill off Happy. At least not for a few episodes!

At first I wasn’t sure how this show would do but soon found myself caught up in the new season. I found myself looking forward to each episode and trying to predict what will come next as each episode unravels the story. It takes a few episodes to catch on to the story as they use flash backs to bring out EZ’s past throughout each episode. You have to watch several shows before you figure out EZ’s past and the true storyline of Mayan’s M.C. Can’t wait for Season 2 to begin!

Kurt proving he’s a master at what he does!!!

Whoa Cuz - Meh...go buy a bike and learn to cruise it.

I Luv this show!! I definitely need an EZ in my life 💙

Ashmarissa - Kurt Sutter does not disappoint!!!

Karmijn du Sonneville - Not off to a good start

After watching the first episode of Mayans, I get the feeling that Sons of Anarchy is something that will never be matched. The case for Mayans seems like it was put together from scraps and the script is just full of unbelievable nonsense. And it really doesn't portray Latino culture in a genuine way. The story plods along where in SOA, there was tension and energy. All in all, Mayans looks like a cash grab, the dreaded sequel that is always worse than the original.

Nisi59 - NO BLACK LATINAS OR LATINAS

Sooooo there are NO black Latinas or Latinas available for the love interest............just asking.

Some would expect the same situations and solutions with a different patch but no they are different. Showing samcro in the first episode was awesome to see. 2 episodes in I hope for more.

pholly - All my fears were realized

I loved SOA but everything I thought would ruin this show, did. This is just an abomination offshoot of a great show.

misabeell - Not my cup of tea

jojomon/elijah - Needs to get better

I plan on watching but if it continues to be as dry and boring as the first episode I plan on finding something better to watch.

episodes 1 & 2 have not disappointed. Incredible how Sutter has interweaved elments of SOA into the Mayans but created a whole new story line. Looks like I have my Tuesday nights planned for me again!

Great so far hopefully we see more of sons of anarchy through the series!

Was amazed at how good the writing and story telling was on the pilot! Loved every minute of it. I’m invested already, I can’t wait for the rest of the season

Was amazed at how good the writing and story telling was on the pilot! Loved every minute of it. I’m invested already, I can’t wait for the rest of the season

First scene of episode one made it very clear to what the producers were saying every interview: this is not the Sons. They way they shaped this world inside an existing one we already love and know it amazing. I loved every second of episode one and cannot wait to ride the rest out.

This show is so fricken good. Episode 1 was intense rigt off the bat and the previews for whats to come this season make it look like it could be better than SOA!

byrdie12 - Love the overlap of characters

I started watching this show thinking it could never be as good as The Sons of Anarchy. However, after the first episode I am already obsessed and have no idea what direction the story will take. I love how there are many of the same actors from the original show and hope it will deliver because it has a lot to live up to.

SOA turned out to be nothing more then a Soap about the Katie Seagal character. I'm hoping they learned their lessons and improve on their failures of SAO.

I will review after watching 😁😁😁😁

I went into this thinking it's going to be uttery lacklustre in comparison to SOA.Boy was I proved wrong.A promising first episode.Can't wait to see the remainder of the season.Thanks to whoever at iTunes or Kurt for making episode 1 free!

@logolesspro I know season 2 of Mayans M.C. is missing but season 1 just won’t work now also, hope you can get ever… 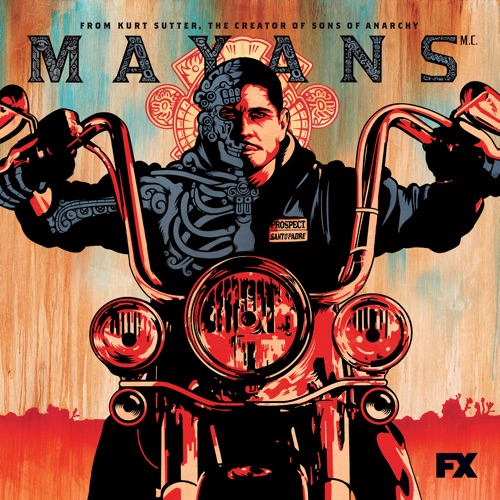