When the two shots rang out, Bruce Wayne's life changed forever. He pledged himself to justice and he held that oath for years. Wearing many names - the Dark Knight, the World's Greatest Detective, the Caped Crusader and Gotham's Greatest Hero - he battled tragic foes like The Joker, Penguin, Mr. Freeze and so many more. But deep inside, he knew that he shared something with them that most of humanity wouldn't understand - a commitment to the fight. The acclaimed, Emmy-winning TV series redefined this complex man as an edgy hero struggling for revenge and redemption each time he donned the cape and cowl, and this comprehensive collection contains every episode, with all the allies, criminals and showdowns in Batman's history. Batman: The Complete Animated Series Wiki

Experience the thrills of vigilante justice as millionaire playboy Bruce Wayne and alter-ego Batman protect the streets of Gotham City from a host of villains including archnemesis The Joker, deadly-beautiful Poison Ivy and primitive Killer Croc in a fresh take on super hero storytelling. Intelligent, dramatic stories, unique characters and sharp dialog shaped this edgy TV series into an Emmy®-winning powerhouse that brought the Caped Crusader out of the dark alleys of TV history and into the present for fans of all ages.

It never gets old. This is arguably the best version of the Batman, his allies and rogues gallery.

For only $39.99, you get all 4 seasons of the greatest animated Batman show ever. So, for the price of less than 2 singular seasons, you get all four.

The definitive version of Batman.

Best animated series ever made. A real classic they should bring it back. Brings back so many memories. Thank you for the remaster.

I purchased the entire series years ago, in separate volumes, at a much higher price. I’d love to own it in HD, but I’ve already spent nearly $100 on the SD version. Would it be possible to upgrade to HD and to erase what I have? I don’t want to pay twice and I don’t need 2 copies.

I purchased this series in SD because at the time it was only available in SD. Only to find out that the show was later on released in HD. I very disappointed that my purchase did not upgrade to HD. I should not have to pay for the whole entire series all over again just to upgrade to HD!

SaiyanBoy - Price was nice but

I don’t know if it’s just me but the Apple TV app plays the episodes out of order. Wish iTunes would just offer the complete series bundle and give you the seasons individually.

I just bought this series, because is one of my favorites of all time; however nowhere says that only comes in English without subtitles in Spanish. So the rest of my family (they don’t speak English) can’t enjoy it with me. Please Apple add Spanish subtitles. Thank you.

I’ve never seen all the episodes and am thoroughly enjoying them. Must buy for fans of Batman!

What a classic. I am not at all disappointed with this purchase at all.

Brother Bisquick - This is the version to buy

Only two things need to be said about this collection. One, the high def version is 1427x1072. Warner didn't crop it or stretch it to widescreen, it's still 4:3, and it looks absolutely gorgeous. Two, a major complaint of the old individual seasons was how episodes randomly featured the later Batman/Superman Adventures opening. Admittedly, I've only checked through season 3 so far, but the original title sequence (and the later Adventures of Batman and Robin) are present and accounted for.

Damianindica - Obviously best show ever but

Is this the remastered version. Need to know before i drop 80$ on dang itunes

ChanceJD - This series defined my childhood

Kevin Conroy will be the only Batman /Bruce Wayne for me. The only thing that could have made the series better was for it to be available on demand like with iTunes and in HD. Well done WB and Apple. 🙌🏻

They always cancel the good stuff!!!

I haven’t purchased it yet but I most definitely will. Batman The Animated Series was in my opinion is the best Batman animation still to this day. Warner Brothers thank you for creating a quality animation that has stood the test of time.

Why can’t DC just make a Batman movie as great as this series.

A sentiant pile of geese - Boy, do I love me some Batman

21st Century Film Lover - One of the all-time television greats!

Batman: The Animated Series has become as revered as classic Hollywood movies that helped shape their respective genres and medium on the silver screen. And there’s good reason why Batman’s become a piece of pop-culture that’s practically synonymous with The Dark Knight himself: and this show took its writing seriously and its art-style was a game-changer for American animation on television. It’s a show as classic as The Twilight Zone, as revered as Star Trek: The Original Series, and it’s an anti-thesis to Adam West’s classic (and campy) Batman. It’s great stuff. This has done for superhero cinema and tv what The Good, The Bad and The Ugly did for Westerns. It’s that good! Batman is a masterwork of television and animated filmmaking.

Roro-1988 - There’s something wrong with the numbering

There something wrong with the numbering the first season has 60 episodes but only shows halve of them. Only found the others because of Apple TV. Someone needs to work on indexing the episodes properly. Other than that episode as good as I remember. Much watch for Batman fans.

J4jacky - Is this Remastered version?

Does anyone knows if this is the remastered version released to Bluray in 2018?? thanks

Always loved these and always will. Just wish when you bought it that it’d put all the complete series in a folder and then each series separate inside it. It comes as one big file with 109 episodes. 🤷🏻‍♂️ why oh why. Not a bad price. £50

Wh cant the DC make films as good as their tv shows. This is a prime example when they did it right superb cartoon that spawned so many other shows and direct to dvd movies. This is the batman i grew up with and love watching it.

@omahajon They have every DCEU movie except MoS and BoP. Every Burton/Schumacher Batman movie. Complete series of B…

@cooperbarnes: Hey Warner Bros. - if you released a streaming app that had the complete library of Warner Bros. cartoons, you’d make a g…

Pick up the COMPLETE BATMAN THE ANIMATED SERIES & the rest of our RECOMMENDED READING by clicking this link:…

So far, my favorite part about Batman: The Animated Series is the complete lack of effort in trying to make the gra…

My last frivolous purchase: The complete collection of Batman The Animated Series on Blu-ray. Wanted it for year… 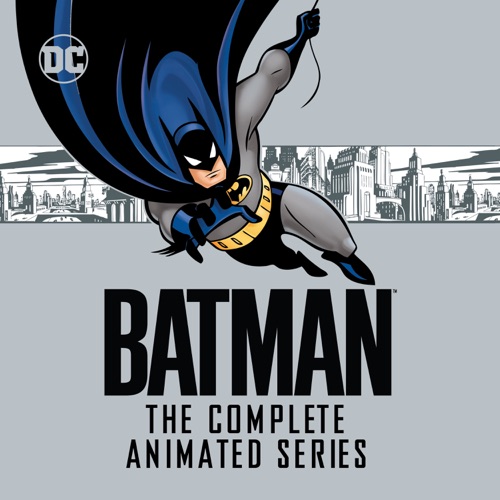