TITANS is an all-new live-action drama series that follows a group of young soon-to-be Super Heroes recruited from every corner of the DC Universe. In this action-packed series, Dick Grayson aka Robin (series star BRENTON THWAITES) emerges from the shadows to become the leader of a fearless band of new heroes – including Starfire, Raven, Beast Boy and many others. DC Universe's first original series follows this group of young heroes as they come of age and find belonging in a gritty take on the classic Teen Titans franchise. Titans, Season 1 Wiki

Titans follows young heroes from across the DC Universe as they come of age and find belonging in a gritty take on the classic Teen Titans franchise. Dick Grayson and Rachel Roth, a special young girl possessed by a strange darkness, get embroiled in a conspiracy that could bring Hell on Earth. Joining them along the way are the hot-headed Starfire and loveable Beast Boy. Together they become a surrogate family and team of heroes.

I bought this looking at the reviews. This is a god awful series. Just a bunch of strays who doesn’t know what do with their lives or abilities. Always b^tch and moan about things rather than get yourself together. The director really built up this BS all the way until the first episode of the S2 that they kill the most powerful character in 5 secs. Unbelievable! Only good this about this series is the costumes. Please don’t waste your time or money

Just one of those iTunes price drops that I could not pass on, so I bought this show. Not to bad, it starts slow but gets better and kind off peters out near the end. So I give it 3 stars. But I just picked up season 2 on sale, another low price bargain grab. But episode 1 sucked and I lost interest. Maybe get back to it in a few weeks or months...

CRYBABY👑 - This is my favorite

If you’re familiar with the cartoon series, you have some expectations going in. Prepare to be disappointed. Bubbly, perpetually happy characters that have a strange level of naive, are instead morphed into worldly, no-nonsense grumps. Dark broody characters are neither dark nor broody. I get it, origin story and all that. Even allowing for that, plot, and things into a second season, I’m not finding more than hints of the characters I came looking for. Things also get a certain level of strange with references to the older content, like when they refer to grown adults as ‘lad’, doing adult things. That’s not to say that the show’s content is bad, it’s just nothing like the cartoon series. Different characters with the same names and skill sets, different problems, an entirely different mood to the show. All topped off with characters stuck perpetually in “I’m (not) helping as hard as possible” mode, typically doing one or more of the items near the top of the “things to never do in a crisis situation” list. Realism: 1 - Any group where everybody acts this way would fall to pieces in days, and be glad to be past the experience. That said, it makes for a good “here’s how not to handle this kind of situation.” reference. Is anybody calling these behaviors out, giving advice about them, etc? Of course not, because then there’d be less drama. Effects: 4 - above average, but lacking in some ways. Some of it’s style, some of it’s where the effects fall short. Acting: 3 - The main characters are at least decent, occasionally you’ll see a minor character that looks like they got lost on the set, or are being given their lines one. Word. At a. Time? Story: 1-5. Not my cup of tea (drama overload), but I realize some people like drama.

Hueylewis74 - Not the Titans your used to

I enjoyed myself but had to let go of a lot as a Teen Titans fan. Several characters are given the darker take that I didn’t really think needed it. But really enjoyed it for what it was. A new look at some classic characters.

I usually don’t review nothing but. One of the best if not the best superhero shows of all time. Action & adventure in every show!

When are you going to release season 2?

When I first saw the poster for this, thought oh another CW’s (like) finest...Flash, Green Arrow...etc. Then I was bored and decided to see if I could make it through episode 1. OMG! This show is like Watchmen meets Suicide Squad meets Rob Zombie! This is what superhero shows to model after. I agree with the reviews...gritty, raw, uncensored marvelous. A must watch! If your like me, don’t judge a book by the cover.

crabtrem - I love this version of Titans

I picked up season 1, and I’m blown away. Very different and very dark, but absorbing. Every episode had my full attention. I like the story line, I love the characters, and I love the shocks and surprises. I can’t wait to get season 2.

I really liked the season. It was good in the beginning but continued to get better towards the end. My only problem was the blood looked very fake. But that didn't take away from the plot at all. I can't wait for season two to drop on iTunes.

This had some potential. It was a fair departure from the comics, with larger age differences between characters creating a kids/adults dynamic rather than a Team Titans dynamic, but there was some interesting initial development and some dark/fun writing. Unfortunately, by half way through the first season this had succumbed to low-budget schlock Hollywood writing where all characters become petulant teenagers with IQs of 70 in order to create fake conflict and advance the plot. Actors are unable to reach their potential because they’re delivering the usual bad writing in a wooden way. Character development falters as the plots become dumber. Definitely not worth the season purchase; in fact, not even worth a binge watch on a day you’re home with the flu.

This show was amazing. I loved the dark and good times and that all the characters had a great sense of humor. It was great to learn the background from each character as well. Definitely can’t wait to see Season 2!!! 😁😁😁

CalebLeung1997 - Can they fix the casting and the costume?

I got next - Dc comics was always dark

This show is fantastic. Yes they went away from the comics somewhat but the realistic touch really works. Def can’t wait for season 2 on iTunes lol. Because I’m not suscribing to dc universe :) this show is well worth it.

PositiveVibesOnly - Don’t Judge a Show by its Trailer

Let me just say, Titans is amazing! I was one of the few people eager to watch this series but I was disheartened to learn it wasn’t available on Netflix here in the states. Luckily, Apple saved the day and I can say, hands down, this show blew my expectations out of the water. I binge watched it so hard and cannot wait for the next season. The show improves immensely as it further develops the characters, plot, and physical locations throughout the episodes. I would highly recommend giving Titans a watch. 👍

For those of us who actually read comics. It dosn't stray much from Source material, Just adds a touch of realness in the characters Arc. AWESOME SERIES!

Joseph Dewilde - OMG! NOW THIS IS A SUPERHERO SERIES!

At first I was skeptical about this series but then I decided to purchase it and I AM SO GLAD I DID. Totally blew me away. I’m on edge waiting for the next season! The marvel series have nothing on this one and I enjoyed the marvel Netflix series except for Iron Fist.

Love this show and can’t wait to see what happens in season 2. Donna Troy is the best!!!

This is the best Season I’ve ever watched in my life!!! Much better than Arrow and Supergirl Season. They’re so boring.... You know, Supergirl is stupidly strong and Arrow is dark but boring..... For this titan season, I’ve enjoyed it so much that I’m looking forward in the next Titans Season!!! Congratulation to Actors and Actress!!! Keep on with that!!!

This show seems rushed and just smacked together over night. The acting is poor and it’s the action scenes are rushed and boring. It could have been better.

I’m so glad they added this show to iTunes! I’m obsessed with this show!!! 🥰🥰🥰

Well it’s better than the Inhumans TV series to a fault! 😂 just don’t expect anything life altering out of this!

This show is great!!!! Needs to be on all streaming platforms

OtakufromAZ - Better than I was expecting....

Better than I expected, but still not what I would consider great. I'll stick with the original animated series.

_jenwalker_ - This show is amazing

This show is so amazing and I’m so happy everyone is able to see it now cant wait for it to be out on iTunes too!!

Buy 11 episodes individually for $3.50 a piece, and somehow the bundled deal amounts to $80, nearly twice the price of buying each episode separately. Come on, Apple. Get it together.

Why Nickname? - The show is good, but the price is broken

Really well done and just wondering why it is still episodes and not a season price?

Absolutely love this show, so happy its on iTunes UK can't wait for Season 2

Absolutely amazing. A new season would be great.

Finally on iTunes UK Thank you 🙂👍🏻. Price is a bit to High though🙁🙁

i love the second season of titans but the first one... idk. they didnt do justice to the storyline i guess??? but…

Titans' set deadline for anti-vaccination duo. This could have HUGE ramifications on the players' 2020 season.…

@JayMitch_: Herman Boone coach who Denzel Washington played in 'Remember the Titans' connection to this game/season. Boone born on date…

@morsebird // Yeah Titans, Doom Patrol, Swamp Thing, and Star Girl were all supposed to be exclusives on there and…

@telegraph_sport: #BREAKING Titans anti-vaxx duo to be forced to sit out the entire #NRL season, via @cjhonnery … 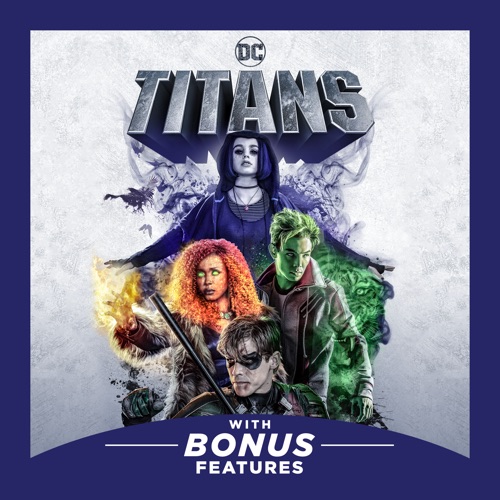