PAW Patrol is a CG action-adventure preschool series starring a pack of six heroic puppies led by a tech-savvy 10-year-old boy named Ryder. With a unique blend of problem-solving skills, cool vehicles and physical humor, PAW Patrol is sure to keep preschoolers engaged as they work together to protect Adventure Bay. PAW Patrol, Vol. 11 Wiki

Pups Save the Jungle Penguins / Pups Save a Freighter
An ice floe carrying three penguins lands in the jungle. Now the pups must get them back to their frosty home! Daring Danny is locked out of the lighthouse Turbot left him to look after. Now a freighter is headed straight for Seal Island!

Ultimate Rescue: Pups Stop a Meltdown / Ultimate Rescue: Pups and the Mystery of the Missing Cellphones
It's a hot day in Adventure Bay, and things are melting! The pups will need a lot of fire-pup power to cool things down. Cell phones are vanishing all over Adventure Bay! The pups will need a lot of police power to solve this mystery and save the day!

Pups Save a Melon Festival / Pups Save a Cow
Mayor Humdinger's plan to win the giant melon contest goes off the rails when his "melon" bounces away, causing chaos all over town! When Farmer Al's truck gets stuck on top of the broken bridge, it's up to the pups to lower them to safety.

Pups Save the Honey / Pups Save Mayor Goodway's Purse
Yumi's Yummy Honey is all the buzz when it – and her beehive – go missing from her farm!Mayor Goodway's purse has disappeared! Along with its precious cargo – Chickaletta!

Pups and the Stinky Bubble Trouble / Pups Save the Baby Ostriches
What's that smell? A strange odor is chasing the jungle animals away from their homes!Olivia the Ostrich has fallen in to the canyon! The pups need to work together to lift her to safety, while keeping her soon-to-hatch eggs warm.

Pups Save Gustavo's Guitar / Pups Save the Yoga Goats
Gustavo Goodway's guitar is missing. The pups need to find it before tonight's campfire concert! Farmer Yumi's new Yoga Goat class is a hit, until her goats go missing! It's up to the PAW Patrol to find the goats and return them safely to Yumi's farm.

Mighty Pups, Super Paws: Pups Meet the Mighty Twins
Super-bandit Ladybird shrieks havoc in Adventure Bay taking all of the town's treasures – including Mayor Goodway! The Mighty Pups team up with new super pals The Mighty Twins to save the day – and the Mayor - in this super heroic adventure!

Pups Save Bedtime/Pups Save Chickaletta's Egg
The Turbots are trapped somewhere in the jungle. They tried to call the PAW Patrol, but their phone cut out!Chickaletta has laid an egg, but it rolled away and is heading through town. The PAW Patrol has to catch it before it breaks!

Pups Save a Manatee/Pups Save Breakfast
Farmer Al and Farmer Yumi need help from the PAW Patrol to a get a manatee to the swamp!Mr. Porter and Alex are in a sticky situation - they're up to their ears in maple syrup! It's up to the PAW Patrol to save the Porter's and Breakfast!

Pups Save the Land Pirates/Pups Save the Birdwatching Turbots
Pirates Alex, Julia, Julius and Chick-ARR-letta, are sent sailing into the desert and get lost! It's up to the PAW Patrol to save these Land pirates.Cap'n Turbot and Francois chirp need help when a bird-watching contest leaves them up in the air.

What do you think PAW Patrol, Vol. 11 tv serie? Can you share your thoughts with other peoples?

The Might Pups get more popular, here, and my youngest son couldn’t be happier. It continues to get more popular in Volume 12. To the young man who asked why this show is still on Nick Jr., the channel knows kids age 2-10 LOVE Paw Patrol. And parents who want their kids to watch entertaining material that is completely wholesome, are happy to buy the seasons like I did for my kids. Nick Jr isn’t for preteens anyhow. As a school bus driver, I can tell you my kids AND my kids at work simply LOVE PAWPatrol. May they keep making it for many more years. Also, Volume 13 has dinosaurs, and my youngest is OVER THE MOON about that.

a guy that love cheese - Why is this show still airing ?!?

My little brother loves your show. Now he watches it all the time please listen to this letter thank you and bye. 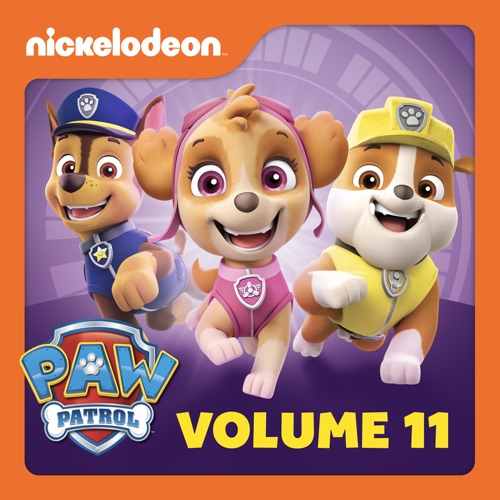