The Pritchett-Dunphy-Tucker clan is a wonderfully large and blended family that gives us a hilarious look into the sometimes warm, sometimes twisted, embrace of the modern family. Modern Family, Season 11 Wiki

1 - New Kids On the Block
Haley is determined to follow the advice in her parenting books with the twins, but Phil and Claire think their old methods are better. Meanwhile, Manny is set to direct Jay’s dog bed commercial in the hopes of winning his ex-girlfriend back.
2 - Snapped
Claire needs to get everyone out of the house before they make her look bad in front of a reporter from an important women’s business magazine. Meanwhile, Jay invites Manny to a little wine tasting in an attempt to spend some quality time together.
3 - Perfect Pairs
Phil, Claire, Alex and Luke love having the twins around, but taking care of them is exhausting! However, when they realize the babies might help them with a few things on their to-do lists, they offer to give Haley the day off.
4 - Pool Party
Mitch and Cam help Lily overcome her insecurities about wearing a bathing suit to a pool party but discover their own. Meanwhile, now that Gloria’s new internship is taking up so much of her time, Jay is feeling particularly neglected.
5 - The Last Halloween
Phil is determined to finally scare Claire on Halloween. Meanwhile, for the first time, Gloria is feeling self-conscious about her age when someone correctly assumes she is Jay’s wife; and Mitch and Cam head to the WeHo Halloween Carnival after Lily decides to go to her first Halloween party alone.
6 - A Game of Chicken
Gloria is using her alone time with the twins as an opportunity to secretly baptize them before Haley and Dylan get home. Meanwhile, Claire is still dealing with the fallout from the smart closet fiasco, and Cam is at war with his school’s mascot who is threatening his chance at securing a new college coaching job.
7 - The Last Thanksgiving
Cameron and Mitchell’s friends mistakenly assume they have split up and have definitely chosen a side, and Haley attempts to cook Thanksgiving dinner as a thank you for Claire and Phil’s support with the twins. Meanwhile, Jay invites Phil and Dylan out to fly his model plane, and Phil thinks this is his chance to reclaim his dignity after their first outing 10 years ago went so wrong.
8 - Tree's a Crowd
The Dunphy house is bursting at the seams when Dylan’s hippie mom moves in and Claire’s lonely stepdad, Jerry, wants to pay them a visit. Meanwhile, Jay and Gloria attempt to help Manny get over his big breakup with Sherry.
9 - The Last Christmas
Cameron is hoping to keep everyone happy for their annual Christmas dinner, but Mitchell is suspicious he is hiding an ulterior motive. Meanwhile, Claire tries to dodge Jay’s job offer to work at his dog bed company and Luke has to deal with the consequences of kissing Manny’s ex-girlfriend, Sherri.
10 - The Prescott
Alex’s new company is putting her up at a new luxury apartment with full amenities and a list of high-profile residents that the family is eager to take advantage of, without her knowing. Phil is on a mission to review the restaurant’s famous sliders for his food blog, while Mitch and Cam sneak in separately to meet its most famous resident, David Beckham.
11 - Legacy
Phil pays a visit to his dad to make sure he is ok after hearing some concerning news about him. Meanwhile, Jay gives Claire and Mitch a bunch of their old childhood memorabilia that triggers them to reevaluate a long-held story about their first family vacation.
12 - Dead on a Rival
Mitchell learns a valuable life lesson when Murray (Paul Dooley), a former resident of the house, shows up unexpectedly. Meanwhile, the Dunphy’s old neighbor-turned-tech-titan, Kenneth (Josh Gad), comes to visit with a big surprise for Phil. Then, Manny’s dad, Javier (Benjamin Bratt), shows up with a big opportunity for his son.
13 - Paris
In one last family trip, everyone heads to Paris so Jay can accept a lifetime achievement award for his work in the closet industry. However, his old nemesis, Earl Chambers, finds a way to haunt him. Meanwhile, Claire has a secret rendezvous in one of the most romantic cities in the world, and Cam’s lifelong dream of performing as Fizbo on the streets of Paris is about to become a reality.
14 - Spuds
Phil and Claire take Haley and Dylan to dinner to reassure them they are not bad parents. While out to dinner, they run into Mitch and Cam who are chaperoning Lily’s first date, as well as Jay and Gloria after attending Joe’s school play.
15 - Baby Steps
Claire has landed an interview for her dream job and is thwarted on her way to the interview by Phil’s tricky staircase. Meanwhile, Cam and Mitch debate the pros and cons of adopting another baby after unexpectedly receiving a call from their adoption agency.
16 - I'm Going to Miss This
Mitchell is having a hard time letting go of his old life and Gloria steps in to help him say goodbye. Meanwhile, Haley, Luke and Alex decide to throw a party at the Dunphy house when Claire and Phil leave for a trip, and Dylan’s mom takes the twins for the night.
17 - Finale Part 1 and 2
Mitchell and Cam settle in on their new normal, and Phil and Claire decide that one of the kids needs to move out in order to take control of the house again. Meanwhile, as Gloria becomes more successful at work, she notices Jay, Manny and Joe don’t seem to need her as much. The entire family discovers saying goodbye is much harder than it seems.
18 - Modern Family: A Retrospective Look Back
A look back at the Pritchett-Dunphy-Tucker family journey through the years.

One of the best sitcoms ever

I loved it so much and I watched the finale last night and I was so sad. I was sad because I did not wanted this show to end. I really liked Sarah Hyland in this shoe. I recommend watching this show. It is really funny!

Yes this show is cheesy for the most part but you should recognize THAT IS THE POINT. Just like Leave it to Beaver and Happy Days and alllll of the other cheeseball, pun-pending show since the 30’s, it has its place. There is something special about this show. No it is not profound, no it is not going to make you think and blow your mind with suspense and plot twists or symbolism buried in the writing. The show serves the purpose for which it was created; it has been my guilty/cheesy/to my husband intolerable pleasure for 10 years and I tell everyone I know to give it a shot. Seriously, it’s “entertaining”.....that’s the intent.

My whole family LOVES modern family and everyone I introduce it to also falls in love with the show!!!!

I LOVE THIS SHOW SO MUCH

12-15 this garbage show is going to get cancelled Bet

My friends and I are obsessed with this show!😍😍 I’ve watched every episode at least 5 times

It is OK for some I suppose but I found barely watchable - No need for near slapstick to be humerous.

Best show in the universe

So worth the money

This season is so good 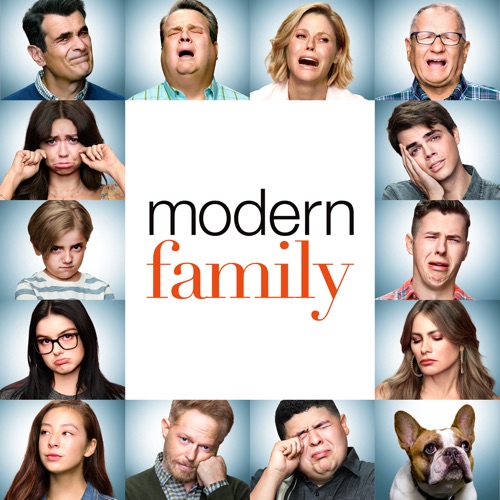