The Good Place has reached the end of the forking road - and you won't want to miss the final twists and turns in store for the fan-favorite and Emmy-nominated series as it approaches its finale. From creator Mike Schur, The Good Place follows Eleanor (Kristen Bell), an ordinary woman who enters the afterlife - and is sent to the Good Place instead of the Bad Place (which is definitely where she belongs). While hiding in plain sight from Good Place Architect Michael (Ted Danson - "Cheers" - in an Emmy Award-nominated performance), she's determined to shed her old way of living and earn her spot. The Good Place, Season 4 Wiki

A Girl from Arizona, Pt. 1
With Eleanor assuming the role of the architect, the group adapts to the challenges facing them when four test subjects inhabit a new neighborhood under their supervision.

A Girl from Arizona, Pt. 2
Eleanor, Michael, Janet and Tahani have their hands full when the new residents begin to show their true colors. Jason receives some unsettling news.

Chillaxing
Michael and Eleanor discover something troubling and turn to an unusual source for help. Tahani lends her expertise to assist with one of the new residents.

Employee of the Bearimy
Michael and Jason hatch a plan. Eleanor learns firsthand the difficulties of running the neighborhood.

A Chip Driver Mystery
One of the new residents creates a division in the ranks.

Help Is Other People
On the last day of the experiment, Chidi is faced with one final ethical dilemma.

The Funeral to End All Funerals
The group awaits the judge's final decision on the fate of human existence.

The Answer
In an attempt to plan a better future, Chidi considers his past.

You've Changed, Man
The group works to negotiate an afterlife plan with Sean and the judge.

Mondays, Am I Right?
Michael runs some tests and Chidi gets some good advice from Jason.

Whenever You're Ready
Various conversations occur, between various groups of people.

All of Tahani's Humblebrags
Oh, really, Tahani? You know someone famous? It's not at all like you to name-drop.

What do you think The Good Place, Season 4 tv serie? Can you share your thoughts with other peoples?

One of my favorite shows

What an emotional series finale

Farbegn - One of the best shows of the decade.

Quirky, thought-provoking, and filled with more forking surprises every episode, the good place will always have a place in my heart. There is such amazing character progression each season with the cast, and the center conflict “What makes a good person?” is ageless. Combined with sharp wit and beautiful aesthetic, this show isn’t one to miss.

For some reason the latest episode says I have to purchase even though I bought the full season, it’s episode 9 is there any reason for this?

Joopaca - Why is the last episode not available?

The nineth and final episode is showing up but I can't watch it and it has price tag. Am I supposed to buy this additionally? Or is this going to be released later?

Yep... super funny and makes the squishy insides feel good. Weird combo..... but i like it.

You paid for the entire season. As they’re released you will be able to watch them. 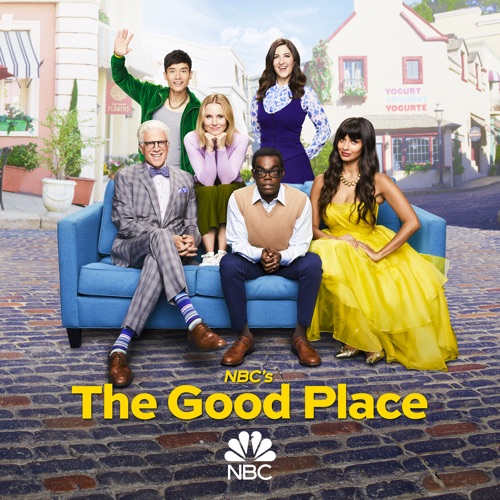