In the 14th Season of It’s Always Sunny in Philadelphia, the Gang goes to extremes. Mac learns a new language, Charlie does a period piece, Dennis attempts a one-act play, Dee cuts her hair, and Frank performs a death scene. The show is produced by FX Productions. It's Always Sunny In Philadelphia, Season 14 Wiki

The 14th season guns for the Best 14th Season accolade as the Gang goes to extremes for the role – Mac learns a new language, Charlie does a period piece, Dennis attempts a one-act play, Dee cuts her hair, and Frank performs a death scene.

The Gang Gets Romantic
Mac concocts a scheme to attract single women to Airbnb Dennis’ bedroom, while Frank and Charlie concoct similar plans to attract young, European coeds. But neither ad attracts their intended target.

The Gang Chokes
Annoyed that the Gang failed to react as he nearly choked to death on an appetizer, Frank decides the Waiter, his savior, is the only person who has his back.

The Gang Texts
During their trip to the Philadelphia Zoo, Mac sets up a text group chain for The Gang, but confusion sets in and The Gang must learn from the meerkats on how to communicate properly in a group.

The Janitor Always Mops Twice
In the black-and-white noir world of his memory, Charlie navigates the seedy underbelly of Philadelphia as Frank has been “diarrhea poisoned,” and it’s up to Charlie to clean up the mess.

The Gang Solves Global Warming
As a record-breaking heat wave overtakes Philly, the Gang plans to profit from global warming by pumping up the A/C so people will congregate at Paddy’s and save energy at home.

Paddy's Has a Jumper
Trapped inside Paddy’s with a suicide jumper on the roof, the Gang wonders if they should bother intervening with an algorithm of their own – Could he, would he, should we?

A Woman’s Right to Chop
When a trendy new hair salon opens up right next door to Paddy’s, Dennis and Frank go on the offensive to stop women from cutting off their hair. Meanwhile, Mac is reunited with his childhood dog Poppins.

Waiting for Big Mo
When a trendy new hair salon opens up right next door to Paddy’s, Dennis and Frank go on the offensive to stop women from cutting off their hair. In the second half hour, Dennis and Charlie stand guard at the entrance to their laser tag base waiting to ambush the legendary “Big Mo,” but Dennis begins to ponder the reasons they play laser tag and if their pursuit of a victory is worth their effort.

What do you think It's Always Sunny In Philadelphia, Season 14 tv serie? Can you share your thoughts with other peoples?

What a sad and evil world BIG TECH is creating for us all......

Wouldn’t had known this show existed if not for Hulu love it. This is show is better than energy drinks.🍻

I don’t want to pay to watch commercials.

holgaard62 - Ads before and after episodes ...

... are unacceptable when the season has been purchased.

I give this show Five Star rating. So funny to watch, and season pass seems to be working now!

I think this may be my favorite show of all time. Every season is stellar, I just binged the latest season and it didn’t disappoint.

You will not be charged when attempting to purchase episodes 9 & 10. Itunes will recognize that you own the season pass and add them to your library.

Great show, however, as I was looking forward to seeing the finale, I noticed I had to pay even though I have the season pass?! Please fix !

I have the season pass for Season 14 but Apple is demanding I pay for the last two episodes. Please fix your monopoly software.

Bought the season pass but they are making us pay for final episodes. Never buy the pass. Thanks apple.

ppdod the great - IF YOU BOUGHT A SEASON PASS!

UPDATED REVIEW: If you were like me and bought a season pass and we’re surprised when you were being asked to pay for the last 2 episodes, it’s okay, it’s just a glitch. I tested this out by removing my Ccard and attempted to buy them again, it recognized that I had previously purchased them as part of my season pass and asked me if I wanted to re-download them. Hope this helps! GO BIRDS!

It’s trying to charge me for the last two episodes also .....

Never buy a season pass on itunes. If you want to reliably watch epsidoes, just buy them one at time. It's not worth trying to save a couple of bucks to miss the season finale of your favorite show :(

MileHighBatman - Episode 9&10 not on season pass???

I ordered season pass and did not get the last two episodes???? Please help!

If I have season pass?

I don't watch TV and I don't write reviews. Share the gift of this show with those less fortunate. Congratulations are in order.

"In some American Gash" ... Sunnys baaaaaaaaack.

Dude, seriously? You guys are still at it, and still making me laugh, harder than ever. This premiere episode was one of the series' best, after all these years... Simply amazing. Best comedy on television by a mile. Sunny doesn't just keep going, it keeps getting better. No one else can say that. No one. #OurSeinfeld

mikkkkkkkexachi - Love u guys but

This is gonna be good

The new season hasn't aired yet, but it's great. 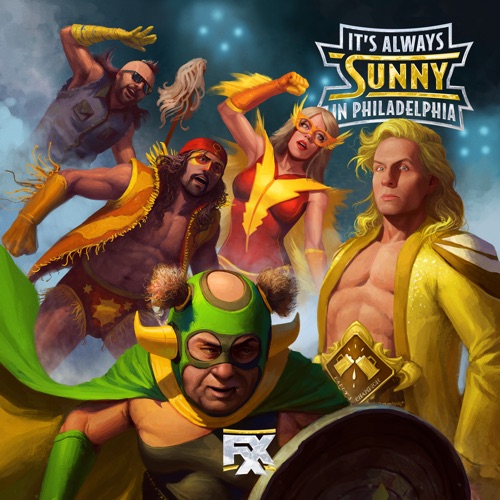 It's Always Sunny in Philadelphia Wiki

It's Always Sunny in Philadelphia Seasons