Season four showed that truth, justice and the American way are stronger than fear and hate, as Supergirl (Melissa Benoist) stopped Lex Luthor’s anti-alien campaign with the power of the press, no cape required. As the world returns to normal, some things will never be the same now that Lena (Kate McGrath) knows Kara’s secret and the Monitor has arrived on Earth 38! Watch, like Leviathan, as new dynamics and relationships unfold for Supergirl and her friends and colleagues as their adventures continue in season five! Supergirl, Season 5 Wiki

Supergirl is an action-adventure drama based on the DC Comics character Kara Zor-El, Superman's (Kal-El) cousin who, after 12 years of keeping her powers a secret on Earth, decides to finally embrace her superhuman abilities and be the hero she was always meant to be.

1 - Event Horizon
In the season premiere, Kara is surprised to find that CatCo has a new owner, who has brought in a star reporter. And J’onn J’onzz receives an unexpected visitor.
2 - Stranger Beside Me
Supergirl, Alex, and Brainiac thwart an alien attack, while William investigates Kara. Meanwhile, J'onn J'onzz and Kelly use Obsidian tech to solve a problem
3 - Blurred Lines
Kara attempts to mend her relationship with Lena. J'onn J'onzz takes a deep dive into his memories while Kelly tries to help an old friend
4 - In Plain Sight
Kara’s investigation into William Dey’s “criminal” activities results in the shocking revelation that he is now who she thinks. Meanwhile, the conflict between Malefic and J’onn J’onzz reaches a boiling point.
5 - Dangerous Liaisons
On the eve of the worldwide launch of Andrea Rojas's VR contact lenses, Kara and William team up on an investigation that exposes a terrorist plot. Meanhile, Kelly and Alex celebrate an anniversary, but Alex's safety is in jeopardy.
6 - Confidence Women
While a new villain is under arrest at the DEO, Supergirl uses him to try and understand who is responsible for the recent attacks. Meanwhille, Andrea and Lena think back on their tumultuous past.
7 - Tremors
While tangling with Leviathan, Supergirl finally learns the truth about Lena. And J'onn J'onnz makes a discovery his brother's whereabouts.
8 - The Wrath of Rama Khan
In the Mid-Season finale, Supergirl’s struggle against Leviathan reaches a boiling point as she faces off against Rama Khan (guest star MITCH PILEGGI). Meanwhile, Hope proves to be an invaluable asset to Lena as they work to launch Project Non Nocere.
9 - Crisis on Infinite Earths: Part 1
In the kickoff to the epic Crisis on Infinite Earths crossover event, The Monitor (LAMONICA GARRETT) sends Harbinger (guest star AUDREY MARIE ANDERSON) to gather the world’s greatest heroes – Supergirl, The Flash (guest star GRANT GUSTIN), Green Arrow (guest star STEPHEN AMELL), Batwoman (guest star RUBY ROSE), White Canary (guest star CAITY LOTZ), The Atom (guest star BRANDON ROUTH) and Superman (recurring guest star TYLER HOECHLIN) – in preparation for the impending Crisis. With their worlds in imminent danger, the superheroes suit up for battle while J’onn and Alex recruit Lena to help them find a way to save the people of Earth-38.
10 - The Bottle Episode
The subsequent complications from the Crisis leave Supergirl to face a chaotic threat.
11 - Back from the Future, Pt. 1
As Supergirl tries to thwart a Toyman copycat, Winn Schott (guest star Jeremy Jordan) returns from the future. Series star David Harewood directs.
12 - Back from the Future, Pt. 2
After Alex sets out to find evidence against Lex, Brainy must decide between helping his friend or continuing to secretly work for Lex. Meanwhile, Supergirl helps Winn face his greatest fear.
13 - It's A Super Life
Mxyzptlk (guest star THOMAS LENNON) returns with a proposition for Kara – what if she could go back in time and tell Lena her secret before Lex did, would things turn out different? Looking back over key moments throughout the series, Kara must decide if she wants to change history to become friends with Lena again. Familiar faces return in this special 100th episode.
14 - The Bodyguard
Lex tasks Supergirl with protecting Andrea from an anti-tech extremist, but his nefarious purpose goes beyond merely keeping Andrea alive. Meanwhile, Lena moves forward with Non Nocere, with Lex’s help.
15 - Reality Bytes
Nia’s roommate, Yvette (guest star ROXY WOOD), is attacked by a man targeting Dreamer because he doesn’t like that Dreamer is transgender and wants her to quit being a superhero. Determined to protect her community from additional harm, Dreamer refuses to give in to his threats and puts herself in the line of fire to stop him. Supergirl stands by Dreamer and enlists additional help from Brainy. Meanwhile, Alex, J’onn and Kelly attempt to rescue a man stuck inside a virtual reality escape room.
16 - Alex in Wonderland
While Kara deals with difficult news, Alex usues a pair of Obsidian contact lenses to visit a virtual National City where she takes on a whole new persona. Meanwhile Kelly helps William investigate Lex.
17 - Deus Lex Machina
Lex proceeds to lay an intricate plan to bring Lena closer to him, defeat Leviathan’s latest attack, and pit Supergirl and team against Leviathan. It is also revealed how Lex came into power after Crisis. Series star Melissa Benoist makes her directorial debut.
18 - The Missing Link
Supergirl and the team go head to head against Rama Khan and Leviathan. Meanwhile, Lena and Lex must join forces when Project Non Nocere fails, leaving the two siblings in serious danger.
19 - Immortal Kombat
In the season five finale, Supergirl must work with the one person she never thought she’d trust again – Lena – in order to stop Lex and Leviathan.
20 - Supergirl Season 5: Comic-Con 2019 Sizzle
A look at the upcoming fifth season of Supergirl reveals a surprise!
21 - The Best of DC TV's Comic-Con Panels San Diego 2019
See the best highlights from the 2019 San Diego Comic-Con panels of The Flash, Arrow, Supergirl, Black Lightning and the upcoming hit show, Batwoman!
22 - Crisis Past and Present: Kevin Conroy Bat Legend
The iconic voice of Batman and Bruce Wayne, Kevin Conroy, wears the cowl in his first live action portrayal of the Dark Knight.
23 - Crisis Past and Present: Superman vs Superman
Supermen from multiple Earths cross paths in an epic confrontation only made possible when there's a Crisis on Infinite Earths.
24 - Characters in Crisis: Pariah
Witness the tragedy and redemption of the mysterious Pariah.
25 - Crisis On Infinite Earths: The Architects Return
Marc Guggenheim, Dan DiDio, Marv Wolfman, George Perez, Jerry Ordway and Tom Derenick discuss the influence of the original Crisis story on the DC Universe.
26 - Characters In Crisis: Anti-Monitor
Unrivaled power, bent on destroying Earth after Earth, this is the Anti-Monitor.
27 - Crisis Management
The masterminds of the Crisis saga share their experiences as they bring the iconic story to television in an epic 5-hour event.

Great but liked the old costume ever

OK, after learning how much Melissa loves her new super pants, I'm going to go easier on my review this time. At least she's warmer in the Vancouver weather. That being said, playing NSYNC over fighting scense was the worst choice ever, guys, c'mon. I cringed through it, but it was uncomfortable. It's sad to see these characters' stories come to a close, especially Melissa's, but I'm happy for her to move forward with whatever's next in her journey.

I just wish the CW would stop with this corny, cheesy, identity politics BS!!! No REAL comic or super hero fan watches this drivel

Interesting plot, spectacular acting from melissa. I think melissa is a reflection of hope after he recent abuse story I really started to appreciate her character. She is the beacon of hope her character states to be, encouraging young women to overcome their toxic abusive relationship. Amazing show 🤩 10/10

I’ll give a whole 5 stars when supercorp happens. So many more people would watch the show if supercorp was cannon.

It's just has gone down hill fast. Season 1 and 2 was way better. And what did they do to her looks, they have made her just look so old and manly. I've seen online supergirl drawings where the pants suit is so much better then this new one and she is still looks feminine.

One of my favorite show ever. If only they would make Supercorp endgame

Why they keep producing this goo?

IceSoldier16 - More epic than ever!

Supergirl is now a lot more epic than ever this season!

I find myself skipping over sections of this season as i dont see much of what it use to be. Definitely has lost my interest. Where is Supergirl and her main presense and confidence as its been 5 yrs now

nickelodeon 72 - Terrible, do not buy

Seriously, thought I was buying an actual episode... for 3.49..... are you kidding me? nope it’s litterally 43 second clip of the episode. Better off buying showcase channel on your TELUS tv subscription.

This was a really disappointing start to this season. The plot centers around a "grudge" that seems petty, juvenile and lame. Far below the standard of previous seasons. The writers need to pull their socks way up.

With the pass, will I be be able to watch season 5 as each episode is airing on tv or not until the season is over? I am in Canada.

I love this show, is it going to be available for season pass?

HI sorry there Australia but BATWOMAN will not be coming to itunes AUSTRALIA because WARNER BROS australia will not give them the rights to the show. I called them myself

Gar Goras - Like every season of supergirl, it could be better

Like every season of supergirl. it has al this potential but it just misses the mark. Go harder, try harder, and the stakes matter. Hey, when are we going to get Batwoman so we can really enjoy the crossover, and not have a big part of it missing. Come on apple, even though it is might be bad we need it for the cossover

Early days but a good start full of interwoven plots, problems and issues. You know ...clear as mud until episode ....

In this #DC's #LegendsOfTomorrow season finale preview, our heroes will have to go through some very familiar…

@CWEarthPrime: Looking at Rotten tomatoes ratings, Supergirl season 5 scored 92% just like season 1 and 2. Season 4 is at 87% while Seas…

@CWEarthPrime: Looking at Rotten tomatoes ratings, Supergirl season 5 scored 92% just like season 1 and 2. Season 4 is at 87% while Seas…

Me finishing Supergirl season 5 just sucks. Why did it have to end.. This is why I watched it just an episode a day. UGH

#Supergirl Takes on Epidemic of Violence Against Transgender Community, While Kara Suffers Her Own Tragic Loss…

@beautyghost97: "Lena's descent into darkness and her slow climb back to the light has easily been among the strongest Season 5 plot thr…

@beautyghost97: "SG works so much better when we see women working together, especially the two women who have one of the strongest conn… 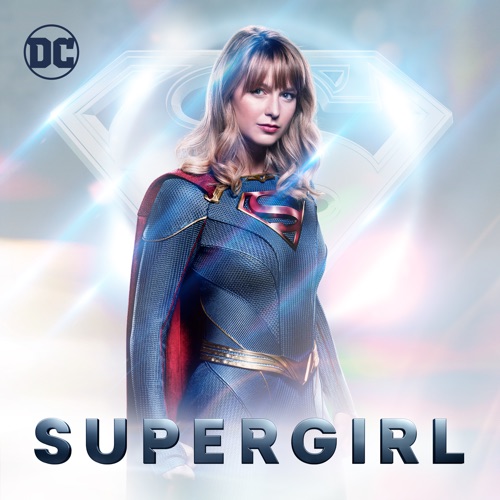