After saving the universe, Steven is still at it, tying up every loose end. But as he runs out of other people’s problems to solve, he’ll finally have to face his own. Steven Universe Future Wiki

Steven Universe, from Adventure Time writer-artist Rebecca Sugar, is a coming-of-age story told from the perspective of Steven, the youngest member of a team of magical Guardians of the Universe.

1 - Little Homeschool
Welcome to Little Homeschool, a place on earth where Gems from all over the universe can come learn how to live together peacefully! But there's one Gem who refuses to attend.
2 - Guidance
Amethyst has been helping Little Homeschool Gems find jobs on the boardwalk, but Steven isn’t sure about her approach.
3 - Rose Buds
Steven gets a surprise visit from some old friends, and an even more surprising introduction to some new ones.
4 - Volleyball
Steven is determined to help Pink Diamond’s original Pearl heal the scar on her face.
5 - Bluebird
Steven questions the motives of a mysterious fusion that suddenly shows up at his house.
6 - A Very Special Episode
Rainbow Quartz 2.0 promised to hang out with Onion the same day Sunstone scheduled a home safety Geminar! How can Steven be in two places, and two fusions, at once?
7 - Snow Day
Steven and the Crystal Gems get a chance to catch up when they’re all snowed in together.
8 - Why So Blue?
Steven has heard rumors of a pair of Gems that are still destroying worlds. If he can’t stop them, maybe Lapis can.
9 - Little Graduation
Steven and the Gems celebrate Little Homeschool’s first graduating class.
10 - Prickly Pair
After leaving Little Homeschool, Steven has found a new hobby, plants.
11 - In Dreams
Steven’s dreams start broadcasting onto his bedroom TV.
12 - Bismuth Casual
Pearl invites Bismuth to the roller rink for a lesson on how to forge human relationships.
13 - Together Forever
Connie has a really clear vision for her future. Steven wants to make sure he’ll be a part of it.
14 - Growing Pains
Steven visits a doctor for the first time.
15 - Mr. Universe
Greg takes Steven on the road to find the origins of the Universe name.
16 - Fragments
Steven heads to the woods to train with a powerful mentor.
17 - Homeworld Bound
Steven heads to the Diamonds for advice on how to control his new powers.
18 - Everything's Fine
Steven insists that everything is fine.
19 - I Am My Monster
Everything is not fine.
20 - The Future
Steven is finally ready to move on.
21 - Steven Universe Future: Sneak Peek
Watch this sneak peek of Steven Universe Future!

I joined the Steven Universe fandom not too long before the movie debuted. Almost all of the main characters are relatable to me and I find the character growth very heartwarming. The episode “I Am My Monster” in the Steven Universe Future finale showed what love truly is, and I appreciate it. Love is patient, love is kind. I am glad this was expressed in purity in the finale. It’s over, isn’t it? ”We love you, Steven.” I am blessed to make an impact on communities of this show’s fans, through social media.

I did not expect it to end like this but I’m glad it did.

The ending of my best season

What an ending all tied together like a dang genius

BAGMANdaAMAZN - Another reason to love Steven

Something I didn’t really expect from SU was its maturity and respectful look at PTSD and moving on from such terrible trauma. I honestly don’t have the words to communicate how much this means to me and a lot of others who have been through such stressful events. Plus I love getting a proper send off to characters I’ve known for years and I know I’ll be crying over it’s end for a while.

and just like that, the show that has shaped me most as a person, has taken its final bows. this show, it was the best thing i could have grown up with. it showed me i wasn’t alone, and everything would be okay in the end. it showed me i was allowed to love who i wanted no matter who told me i couldn’t. it showed me how to stand on my own two feet. rebecca sugar, thank you. thank you for the years of memories you’ve given me. thank you for showing me i’ll be okay in the end it may be over, but this isn’t the end. i’ll see you all in the future ✌️

Love it so far

Great show... but if you buy it and Steven Universe on iTunes they mix together. The ‘Steven Universe Future’ (SUF) episodes are marked as ‘Steven Universe’ (SU) so it ends up being SU 1, SUF 1, SU 2, SUF 2, etc... super annoying because you can’t auto play episodes without it being out of order. Only way to fix right now is download it ALL and make playlists if on mobile. Or download all the SUF and change the show information yourself on a computer.

When are the new episodes coming!!?? I CANT WAIT FOR THIS.

I’m telling you all when I say I’m addicted, I really am bro. I’m almost 19 and I gotta say this show is the one I’m hooked onto. Very good theme and plot to it. Makes you excited to see another episode

When is it coming out it’s been two weeks

I love Steven universe. Love love love. Everything about this show is amazing. It’s not just for kids! This show will really crack your heart open.

I love this show. The original show want you to keep watching and watching until you fall asleep! I’m really happy they are making a sequel because I was sad when I ran out of episodes for original Steven Universe. I like seeing Steven in the future- and I was surprised to see he looked SO MUCH older than the young Steven, even though it is only two years later. Anyway, fair warning please watch the original Steven Universe before you watch this because it gives away spoilers. But I DO recommend it! 🤩

Makes me sob beautiful tears every time I watch an episode

Mestagon - I DO NOT RECOMEND BUYING A SEASON PASS

The show is great yall, however they are not released same day it is aired on TV.....In fact there is no release date info on the season pass description. I would not recomend buying the season pass. I dont watch TV. TV is relic in this day and age. Just buy the episode one at a time or as needed. Since there is a lot of ways to watch anything nowadays.

Don’t kill me but I’ve never seen this show but I’ve seen the preview and WOW it’s sooooooo cool!

SPOILERS SPOILERS SPOILERS SPOILER ALERT SPOILER ALERT SPOILER ALERT Waring- Every SUF thing is thoieries and not known if true or false The villain sneak peak theiores: The huge pink thing- Corrupt Steven? The green thing- Watermelon Steven(s)? Taller Pink Diamond- Final Diamond? (I’ve been calling her Sneeple for some reason) Two Lapis Lazulis- Dunno (More mirror gems?) but I cleverly call them Laz and Zuli (get it?) Jasper- Always a villain smh smh Gem next to Jasper- Bluebird Azurite (I think) she is a fusion of Aquamarine and Eyeball, yet I have no idea why they’re fused Also we need to see Flourite or Rhodonite (or both) unfused

RabbitofAnime - Episodes are wedging themselves in season 1

Future should be marked as a separate season, im finding them inside season 1 inbetween episodes 1-4.

Absolute Amazing, I love this, no one can change my mind, love it all to my heart, this show is out of the UNIVERSE!!!!💫

So good so far, can’t wait to see how the story ends!

Absolutely amazing and cute! I’m sooo sad that its ending but, everything will be answered.

When is the episode supposed to drop on the app so you can watch it?

It’s coming in a few minutes I think

CadeWorld - Bruh I bought on PlayStation

i is steven galaxy fan OwO - I NEED THIS!!

WHY CAN’T DECEMBER 7TH BE TODAY ?!?!?! Also, this is really happening

giantemmet22 - Pls bring it out now

Pls... I REALLY want to see this

i want the episodes - Thank you greatest show ever

Thank you for finally releasing the final episodes

Thank you for putting the missing 8 episodes you are awesome thx and have a great day. 😎👍

Finally! Great show, even late in the series! But Apple sure did take their time uploading episodes 13-20 on the Canadian iTunes store even though they had it on the US store. For that reason, only 3 stars instead of 4.

Where are the new episodes???

I paid for this with my last money and I can’t just avoid spoilers, please release it

BelleCanto - Where are the episodes?

I purchased the season pass, and the show has concluded. The show itself is great, but iTunes is now three weeks behind (six episodes). I will be looking for some other way to buy full seasons of shows in the future, since iTunes continues to drop the ball on getting shows up in a timely manner. Having them up the next day is normal, but at worst, I expect them up inside a week from air.

I’m rating this 5 stars because I love the show...but I’d really appreciate it if I could get the episodes as they come out. The season is over, and 8 episodes are missing.

delays from here to homeworld - Where are the rest of the episodes?

The show is fantastic, but this season pass has really let me down: it's now 8 episodes behind, with absolutely no indication of when they'll show up. This is very frustrating, especially when we're waiting for the series finale (my favorite series of all time!) C'mon, iTunes - if there has to be an extra delay here, at least communicate something to everyone who's paid for it.

I love the series so much! It means so much to me and has impacted my life in ways I never thought it could ❤️ But I’m wondering why I episodes 13-20 aren’t there yet? Please I hope they get put up soon. Thank you

Why did I pay for this if you’re not going to upload the new episodes right away?

I think it’s the perfect series to wrap up and tie loose ends I love the fact the creators continued even though they did not have to! Much respect!

nsnanrjzjdnsnfkkaskhtekk - Where are the new episodes

Best of my money spent ❤️❤️

The Steven Universe Fan - Why

A nice continuation of the main series

Epic, that’s all there is to say.

Excited for the new season to come out, already love it from what I’ve seen.

SunL4 - so good and yeah 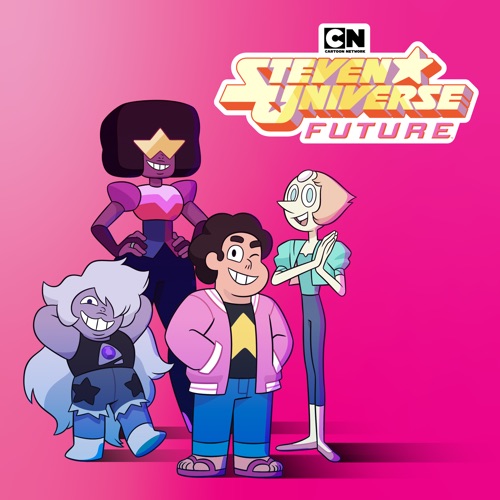