In Season Six, the Roses are achieving success in their careers and personal lives, forcing them all to contemplate their inevitable next steps. But as their pursuits push them closer towards their long-awaited escape, the Roses see how connected their lives have become to the town and its residents. When they finally face the decision to stay or leave, it is much harder than expected. Johnny takes on a second motel, but as the costs pile up, he worries it may have been a huge mistake. Meanwhile, Moira’s Crows movie has thrust her back into the limelight, but when she passes on a major opportunity, she fears she’s lost it all (again). With a wedding in sight, David throws all of his energy into the planning, but when he and Patrick clash on their vision of their future together, David is forced to confront the fact that marriage is more than a wedding. Alexis focuses on her publicity work while Ted is in the Galapagos, and, much to her surprise, her career begins to take off. Schitt's Creek, Season 6 (Uncensored) Wiki

The Roses are achieving success in their careers and personal lives, forcing them all to contemplate their inevitable next steps. But as their pursuits push them closer towards their long-awaited escape, the Roses see how connected their lives have become to the town and its residents. When they finally face the decision to stay or leave, it is much harder than expected.

Smoke Signals
David scouts a potential wedding venue, while Johnny and Moira have a romantic picnic by the creek.

The Incident
David is embarrassed by a childhood issue that resurfaces, while Johnny, Stevie, and Roland attend a viewing for a motel nearby.

The Job Interview
Johnny and Moira endeavor to secure an investor for a new motel, while Alexis and Ted struggle with long-distance.

Maid of Honour
Moira shares the newly released Crows movie trailer with the Jazzagals. Johnny and Roland find a suspicious bag of money at the new motel.

The Premiere
Alexis plans a local premiere for the Crows movie and Moira makes a big splash on the red carpet, while David tends to Patrick after his wisdom teeth removal.

The Wingman
Alexis and Moira deal with the outcome of a viral video, while Johnny helps Bob get back out in the dating world.

Moira Rose
Moira and David sample wine at Herb Ertlinger's vineyard, while Johnny attempts to have "the talk" with Patrick.

The Presidential Suite
Johnny and Moira spend a night in the new motel. Alexis receives a surprise visitor.

Rebound
Johnny becomes overly involved in Alexis�s romantic life, making an already difficult time worse for Alexis. After discovering her car covered in eggs, Moira learns she offended the townspeople by disparaging Schitt�s Creek in an interview with People magazine. Jocelyn helps out David and Patrick at the store, and much to David�s annoyance, she�s a top-notch salesperson.

Sunrise Sunset
Moira’s former “Sunrise Bay” producers (Guest stars Victor Garber and Saul Rubinek) show up with big news, while Alexis binge-watches old episodes of the soap and discovers some dirt. Alexis gives Moira advice on how to proceed, leaving Moira feeling conflicted. Meanwhile, the new motel is proving to be a money pit for Johnny and he’s worried about paying for David’s undoubtedly lavish catering bill for the wedding.

The Bachelor Party
The Roses aren�t thrilled to be roped into the Escape Room portion of David and Patrick�s bachelor party, but they put on a brave face. However, their participation wanes as their personal dilemmas come to a head; Johnny anxiously awaits an important business call, Alexis questions her future, and Moira second-guesses her decision about the reboot.

The Pitch
Johnny, Stevie and Roland head to New York for their pitch meeting, nervous but excited. Moira anxiously awaits their return, becoming more distressed as the day goes on, knowing this is her last chance at escape. Alexis and David get ahead of themselves and contemplate living in New York.

Start Spreading the News
Moira receives some unexpected news and David makes a tough decision about where he wants to live.

Happy Ending
David stresses out over the "rain" on his wedding day, the family scramble to make it right.

What do you think Schitt's Creek, Season 6 (Uncensored) tv serie? Can you share your thoughts with other peoples?

I don’t ever remember having enjoyed myself so much. This is a work of art that I will treasure always. Thank you for making this series. You made me fall in love with so many of your characters. I wish there were many more episodes but alas I’m grateful for the ones I have. I hope you realize how happy you’ve made your audience , a true work of art. Thank you

The only show that made me cry😭😭

swissmbn18 - Levy’s at their Best

I’ve never been so invested in a show. And knowing this is the last season makes me cry. 5/5

A sitcom of this quality is so rare. What other show could take a family of (formerly) wealthy, entitled, spoiled people and gradually make you love each of them unconditionally. Each character is so unique and the actors are perfectly matched for their roles. The love between the parents, between the daughter and her boyfriend, and between David and Patrick are so natural and special ... and hilarious. Hats off to all actors and writers on this series! But, Catherine O’Hara as Moira Rose ... her performance is INSANELY memorable! What a gifted actress in a wonderfully quirky role.

I’ve watched this from season 1, episode 1. Actors are phenomenal and the script spot on. Very entertaining and comical. Very upset the show ended. PLEASE BRING IT BACK!!!!!!! At least play reruns for now as I’d watch it over and over again.

boboneill - Please do an encore season

This show hooked me from S1 E1 and I am not ready for it to end. “Lexi’s” arc just went off track. Mr. Rose is finally getting back in business...Moira’s Crowening will surely lead to treatments for “Miranda’s Rights II: The Shankdown”...and our favorite engaged couple is just getting started in a shared life deserving of a spinoff. The upper class in your cast has kept me laughing since the 80s, and those I met over the last few years have a new fan. If ending now is a corporate ratings decision let us fans know. I have purchased every season...and mass purchasing saved family guy back in 2000 so it could work for “the creek” too!

Can’t wait for the next episode. Perfect binge watching!

I have never been so enraptured by a fictional family!! I love all the different dynamics of love shown; sibling, parental, friends and romance.

I LOVE EVERYONE IN THE SHOW, SUCH TALENT, I’M TOTALLY OBSESSED

The acting! the characters! Hilarious

Love this series! So funny and so much heart in each episode 💕

codymurp - I love the Rose Family

Such a great series. I am so sad to see it end - have been with them since season one and they will remain one of my favorites forever.

This show is one of the best. The writing is incredible and Catherine O’Hara has never been better. AWESOME

Each character is hilarious in their own dysfunctional way..well, except for David’s boyfriend, what’s-his-name. When these characters interact, it’s magic.

There’s no words to explain it is just awesome

Then died after season 3.

The most underrated show ever.

wellhamful - My kind of family 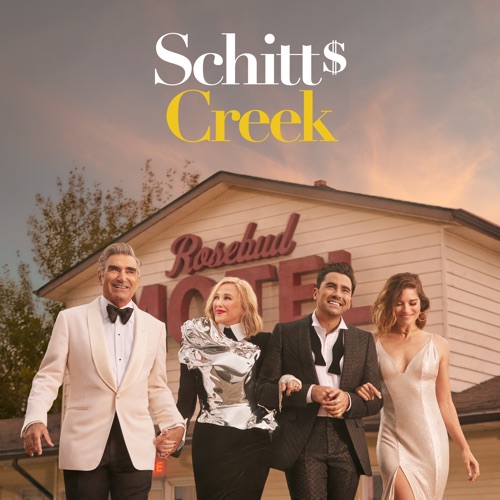