Zoey Clarke is a whip-smart computer coder forging her way in the tech world of San Francisco. After an unexpected event, she starts to hear the innermost wants and desires of the people around her through music. People are unknowingly singing their feelings through popular songs -- just to her. At ?rst, she questions her own sanity, and turns to the only person she thinks could help explain what's happening -- her neighbor Mo, a devoted music enthusiast and DJ. With Mo's help, she realizes what's happening and soon discovers that this unwanted curse may just be an incredibly wonderful gift. Zoey's Extraordinary Playlist, Season 1 Wiki

Pilot
Zoey, an introverted computer programmer living in San Francisco, begins to hear the innermost desires of the people around her through song.

I've Got the Music in Me
Zoey tries to figure out how to control her new abilities while navigating her best friends' romantic feelings for her. A new medical victory for Mitch gives the family hope.

Zoey's Extraordinary Boss
Zoey must decide whether or not to get involved in her boss's Joan's troubled marriage after she hears Joan sing a "heart song." Zoey creates a new program for the family to communicate with Mitch, but when his first word is not what they expected, Maggie reaches a breaking point.

Zoey's Extraordinary Neighbor
Zoey is forced to address her own faith and why she was given these powers as she attempts to help Mo feel comfortable expressing his true self. David creates a "big moment" for Mitch.

Zoey's Extraordinary Failure
After hearing her first duet, Zoey gets a little too involved in her brother's marriage. Leif receives negative feedback at work. Maggie is offered an enticing work opportunity.

Zoey's Extraordinary Night Out
Things get complicated for Zoey at Simon's engagement party. Maggie has a night out alone, but it doesn't go as planned.

Zoey's Extraordinary Confession
Zoey is forced to admit some hard truths to Max. Tobin worries his friendship with Leif is on the rocks. Mo struggles to communicate with the new man in his life.

Zoey's Extraordinary Silence
Zoey tries to help Mitch's caregiver, Howie, reconnect with his estranged daughter. Max must make a decision about his future at SPRQ Point.

Zoey's Extraordinary Outburst
Zoey surprisingly finds herself getting into major conflict with Simon, Max, Mo and even Howie. Tensions arise at SPRQ Point when the fourth and sixth floors compete over an important piece of code. Mitch and Maggie try to celebrate their anniversary.

Zoey's Extraordinary Mother
Zoey has to figure out a clever way to help her mother with an impossible decision. Max unexpectedly bonds with Leif. Mo hits a rough-patch with Eddie.

Zoey's Extraordinary Dad
After hearing an ominous song, Zoey does everything in her power to stop something bad from happening.

What do you think Zoey's Extraordinary Playlist, Season 1 tv serie? Can you share your thoughts with other peoples?

If you enjoy well built stories with a touch of musical flair but not so overbearing that it’s happens every 5 minutes, this is the show. With popular music and exploring the concepts of death, love, loss, and lifestyle, this show is easily one of my favorites

Such a great show

HeartFox - I love this show

Please, give me a season 2 now!

Love this show and the songs and every single one of the characters!!! Jane Levy is perfect as Zoey!!! Hope this show comes back for a second season

AskWhyNot - Wow, this is good!

I enjoy a wide variety of music and appreciate musical numbers like La La Land, but I know it is uncommon to find musical expression done well in a scripted TV show. I cautiously watched the first episode and was happily blown away. This show does it well, and it goes even further - the storyline really matters, and each song captures a given scenario in a deeply meaningful and completely charming way. This is my now my favorite show - I look forward to each new episode!

I just started watching the show today and I’ve binged almost all of the episodes that have aired so far. I love it!! It is so sweet and creative and I love the characters. I’m really hoping this show will end up being on for a while

My playlist is more interesting than these songs. I predict that this show won’t last a season, at least two.

2 episodes in, I am looking forward to more. Music and dance scenes make it like a fun musical, with the twist of trying to figure out what the songs mean. At first, I thought it would be like ‘What Women Want’ (Mel Gibson). Happy to say it has a different energy. more like ‘Wings of Desire’ (Peter Falk), with more pop & positive energy.. This show - with good acting and decent story lines, is fun and thoughtful, and that makes good TV. It explores the concept of hearing what people think, getting a glimpse about lives that are full of different energies .... happy and sad, inspiring and frustrating, and how to respond to the different circumstances. May the writers and choreographers build even more positive energy and develop interesting, complex characters!

This show is such a breath of fresh air in a time where we’re starting to get a lot of television reboots and it works through one of the main mediums we all can connect through: music. It’s got a plot that’s very interesting that I’ve never seen before bolstered by a super eclectic mix of music, along with plenty of heart and comedy to carry it through. Jane Levy is perfect as Zoey and the rest of the cast is just as amazing. I can’t wait to see where the rest of the season takes us.

@Emmy_Zje A great media example of this is Alex Newell & his char. Mo on “Zoey’s Extraordinary Playlist.” The trans…

@symbolicsides: OFFICIALLY DONE WITH SEASON 1 OF ZOEY’S EXTRAORDINARY PLAYLIST AND I’M IN TEARS. I CAN THANK MY BOO @zoeysxinfinity FOR…

OFFICIALLY DONE WITH SEASON 1 OF ZOEY’S EXTRAORDINARY PLAYLIST AND I’M IN TEARS. I CAN THANK MY BOO @zoeysxinfinity… 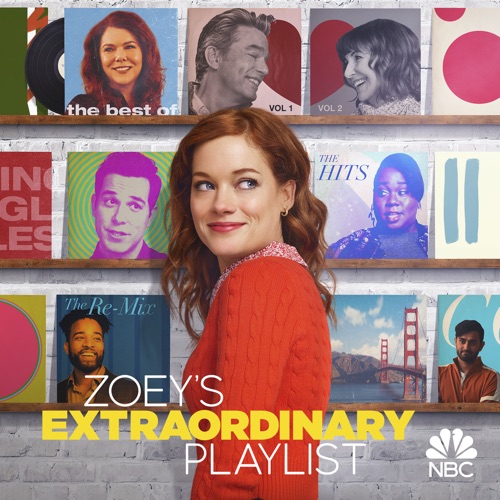