Dirty John: The Betty Broderick Story," the second installment of the "Dirty John" anthology series, is based on another epic true tale of love gone wrong -- a story that spans the 1960s to the '80s, through the breakdown of a marriage that Oprah deemed one of "America's messiest divorces" even before it ended in double homicide. Betty Broderick, played by Amanda Peet, was the perfect Southern California blonde wife and mother. Married to her handsome college boyfriend Dan, played by Christian Slater, Betty charms everyone she meets. After years of sacrifice and suffering while supporting Dan through both medical and law school until he exploded into the San Diego legal community as a superstar, Betty is finally enjoying the fruits of their labors. That is, until Dan hires Linda, a bright, beautiful young woman without baggage with whom he can happily forget the struggles of his past. Betty's attempts to fight back and enraged refusals to accept reality only serve to isolate and destabilize her until she loses her very identity. And Dan's cold confidence blinds him to the bear he has created, and won't stop poking … until it's too late. Dirty John: The Betty Broderick Story, Season 2 Wiki

Dirty John is an anthology series, based on epic true tales of love gone wrong.

1 - No Fault
Betty thinks she can't be divorced by her rich lawyer husband Dan without her consent. She's wrong.
2 - The Turtle and the Alligator
Through med school and law school and many pregnancies, Betty supports Dan til he hits it big.
3 - Marriage Encounter
A worried Betty takes a desperate step to save her marriage, and it works. Until it doesn't.
4 - More To It Than Fun
Dan gaslights Betty til the truth comes out and she sees her life has been a sham for years.
5 - Scream Therapy
Fighting her new reality, Betty goes on the offense, hurting everyone--but most of all, herself.
6 - The Twelfth of Never
Betty faces Dan in divorce court and is crushingly defeated, sending her past a point of no return.
7 - The Shillelagh
Having lost her sense of identity, Betty can only see her own pain - and turn it outward. 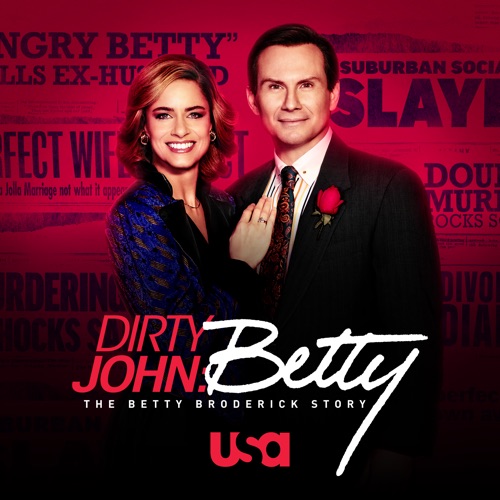