Comedic genius Michael Schur, executive producer of "Brooklyn Nine-Nine" and "Parks and Recreation," presents an original comedy unlike anything on earth. Kristen Bell ("Veronica Mars") stars as Eleanor Shellstrop, an average woman who awakens to the shocking realization that her life on earth has ended. The Good Place, The Complete Series Wiki

Season 1, Episode 1: Everything Is Fine
Thanks to some kind of error, Eleanor Shellstrop (Kristen Bell), an ordinary woman, enters the afterlife and is sent to the Good Place - which is definitely not where she belongs. While hiding in plain sight from Michael (Ted Danson), the wise architect of the Good Place who is unaware that he's made a mistake, she's determined to shed her old way of living and discover the awesome person within. Helping Eleanor navigate her new surroundings are Chidi (William Jackson Harper), her kind, open-hearted "soulmate" who sees the good in people but finds himself facing quite a dilemma; her frustratingly perfect new neighbors, Tahani (Jameela Jamil) and Jianyu (Manny Jacinto); and Janet (D'Arcy Carden), a walking, talking source for all the knowledge in the universe.

Season 1, Episode 6: What We Owe to Each Other
Eleanor (Kristen Bell) is enlisted to help Michael (Ted Danson) with an important task that could determine her fate in the Good Place. Meanwhile, Chidi (William Jackson Harper) agrees to be the third wheel in an effort to help out his friend. Jameela Jamil, Manny Jacinto and D'Arcy Carden also star.

Season 1, Episode 7: The Eternal Shriek
Eleanor (Kristen Bell) and Chidi (William Jackson Harper) set off on a quest with Janet (D'Arcy Carden) as their guide. Meanwhile, Tahani (Jameela Jamil) attempts to show Michael (Ted Danson) how much he is appreciated.

Season 1, Episode 8: Most Improved Player
Michael (Ted Danson) has a private meeting with Eleanor (Kristen Bell). Meanwhile, Chidi (William Jackson Harper), who has been harboring a secret, contemplates what to do.

Season 1, Episode 9: ...Someone Like Me as a Member
Michael's (Ted Danson) skills are put to the test when he attempts to sort out an unprecedented situation. Meanwhile, Chidi (William Jackson Harper) makes a connection elsewhere, much to the dismay of Eleanor (Kristen Bell), while Janet (D'Arcy Carden) shows a different side of herself.

Season 2, Episode 1: Everything Is Great!
Having had their memories erased by ambitious master architect Michael (Ted Danson), Eleanor (Kristen Bell), Chidi (William Jackson Harper), Tahani (Jameela Jamil) and Jason (Manny Jacinto) again settle into the Good Place, unaware of what has previously transpired...except that Eleanor discovers the one clue she had left for herself and attempts to piece things together.

Season 2, Episode 6: Janet and Michael
When the Neighborhood experiences a small glitch, Michael (Ted Danson) has to resolve the issue with Janet (D'Arcy Carden) before it gets out of control.

Season 2, Episode 11: The Burrito
Eleanor (Kristen Bell), Chidi (William Jackson Harper), Tahani (Jameela Jamil) and Jason (Manny Jacinto) consider just how much they have (or have not) improved. Michael (Ted Danson) is left to deal with the consequences of his recent actions.

Season 2, Episode 12: Somewhere Else
Michael (Ted Danson) tries to pull a rabbit out of a hat.

Season 3, Episode 1: Everything is Bonzer!
Michael intervenes in the near-death accidents of Eleanor, Chidi, Tahani and Jason on Earth, in hopes that a second chance at life allows them to become better versions of themselves.

Season 3, Episode 3: The Snowplow
A surprising announcement from one of the humans threatens to dissolve the group.

Season 3, Episode 5: The Ballad of Donkey Doug
Jason visits with some people from his past while Chidi gets help in resolving a problem.

Season 3, Episode 6: A Fractured Inheritance
Eleanor makes a startling discovery that tests her resolve, Tahani looks to make amends and Janet does some bonding.

Season 3, Episode 7: The Worst Possible Use of Free Will
Eleanor recalls some forgotten events from her past.

Season 3, Episode 8: Don't Let the Good Life Pass You By
Michael and Janet take an important journey. Eleanor ponders whether she should share a secret.

Season 3, Episode 10: The Book of Dougs
Michael's resolve is put to the test. Meanwhile, Jason wrestles with his feelings and Chidi surprises Eleanor.

Season 4, Episode 1: A Girl from Arizona, Pt. 1
With Eleanor assuming the role of the architect, the group adapts to the challenges facing them when four test subjects inhabit a new neighborhood under their supervision.

Season 4, Episode 2: A Girl from Arizona, Pt. 2
Eleanor, Michael, Janet and Tahani have their hands full when the new residents begin to show their true colors. Jason receives some unsettling news.

Season 4, Episode 3: Chillaxing
Michael and Eleanor discover something troubling and turn to an unusual source for help. Tahani lends her expertise to assist with one of the new residents.

Season 4, Episode 5: Employee of the Bearimy
Michael and Jason hatch a plan. Eleanor learns firsthand the difficulties of running the neighborhood.

Season 4, Episode 6: A Chip Driver Mystery
One of the new residents creates a division in the ranks.

Season 4, Episode 7: Help Is Other People
On the last day of the experiment, Chidi is faced with one final ethical dilemma.

Season 4, Episode 8: The Funeral to End All Funerals
The group awaits the judge’s final decision on the fate of human existence.

Season 4, Episode 9: The Answer
In an attempt to plan a better future, Chidi considers his past.

Season 4, Episode 10: You've Changed, Man
The group works to negotiate an afterlife plan with Sean and the judge.

Season 4, Episode 11: Mondays, Am I Right?
Michael runs some tests and Chidi gets some good advice from Jason.

Season 4, Episode 13: Whenever You're Ready
Various conversations occur, between various groups of people.

What do you think The Good Place, The Complete Series tv serie? Can you share your thoughts with other peoples?

I had heard this show was pretty good, but I wasn’t prepared for how amazing it truly is. It is equal parts funny, dramatic, and touching. It is an example of the perfect show that doesn’t overstay its welcome, and is consistently great. If you’re on the fence as I was, I would highly recommend giving it a shot.

This show is great. Sad there are no more seasons. No real chemistry between Eleanor and Chidi though. Hard to invest in that relationship.

Indy - A true classic - brilliant comedy with a heart

Genuinely one of the best written comedies in years. Always funny and thought provoking in equal measure, with characters you’ll love to watch grow throughout all 4 seasons. 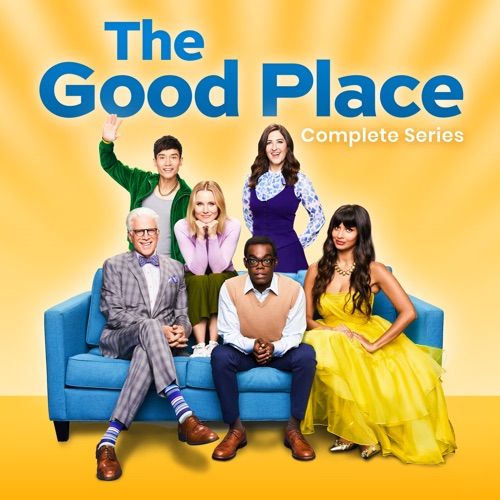