The megahit franchise heads to the scenic mountains of Salt Lake City for a peek inside the unconventional lives of six successful women navigating an exclusive social circle in a city where religion, status and perfection are praised to the highest degree. Representing an array of religious beliefs, including Mormon, Islamic, Jewish and Pentecostal, these Utah ladies have been blessed with luxurious homes, multi-million-dollar businesses, glamorous lifestyles and families. But the pursuit of perfection can take its toll, leading to plenty of drama within their elite group. The Real Housewives of Salt Lake City, Season 1 Wiki

In the majestic mountains of Utah is a hidden social circle made up of successful women who have created their own paradise filled with luxury homes, shopping sprees and multimillion-dollar businesses and brands.

Welcome to Salt Lake City!
Salt Lake City is more than just mountains and religion. When Jen throws a Tongan themed birthday party for her close friend Meredith, it's anything but a celebration when she confronts Mary about insensitive comments made about her family. Heather discovers that her longtime friend from college, Lisa, has been spreading rumors about her. And after years of judgement and scrutiny, Whitney finally has her dream wedding with her dream guy.

A Snow Mountain of Trouble
Meredith's birthday party comes to an icy cold ending when Jen and Mary get into a heated argument about Mary's insensitivity towards Jen's aunt, and Whitney confronts Lisa about an incident at Whitney's vow renewal. While Meredith battles marriage problems and Whitney helps her dad through a difficult time, Heather invites all the women to a ski day, which starts out well, but goes downhill when Whitney and Heather confront Lisa about her judgmental behavior.

Everybody Needs a Switzerland
With the ladies operating on a "clean slate," Whitney plans a roaring 20s party. Heather hosts a baby shower for five of her young, Mormon, pregnant employees, Meredith and Mary grow closer, and Jen acts inappropriately at a nighttime gathering. Later, when Meredith cancels plans, Jen begins to grow skeptical of Mary's involvement and questions Meredith's friendship.

Roaring Emotions
At the conclusion of Whitney's 20s Party, Jen's explosive temper reaches a boiling point and Meredith and Mary are the targets. Meredith finally reveals the truth about her marriage to Lisa, while Jen shares the details with Heather, who then tells Whitney. Mary takes the high road and invites Jen to her luncheon hoping to squash their issues for good, but when Jen tries to open up to the group things take a sudden turn for the worst.

Ladies Who Lunch
Mary's luncheon ends in disaster when Jen accuses Mary of being racist and Mary accuses Heather of being two-faced. While Whitney deals with her daddy issues, Meredith's marriage problems escalate and Lisa reflects on her own marriage. Heather, caught between two friends, attempts to smooth things over with Mary who is still hurting over the things Jen said about her.

Sundance City
When Sundance arrives to Utah, it's nonstop parties and celebrations for the ladies. When Whitney throws her husband, Justin, a 52nd birthday party, Jen and Mary finally call truce. Meredith helps her son Brooks prep for Salt Lake City's very first fashion week while Heather is on the prowl for a one-night stand, with the help of Vanderpump Rules' Utah natives Lala and Katie to assist. And while everyone is partying, Lisa is too busy planning Sundance parties for everyone else in Park City.

Fashion Faux Pas
Now that Sundance is over, Lisa makes a promise to work less, but her husband John isn't buying it.  Whitney grows concerned when her dad says he's ready to move on from the treatment center. And Heather finally comes clean with her daughters over her hesitations with Mormonism and her desire to date. And after Meredith's husband Seth misses the Park City Fashion show, Jen alludes to Meredith having bigger problems in her marriage than she's letting on.

Hot Tub Confessions
While Heather works on expanding her business, Lisa and John have a heart to heart about how much work she's taking on and Whitney enlists her husband, Justin to have a difficult conversation with her father. And although Meredith and Seth decide to give their marriage another shot, after a fun day of snowmobiling, Whitney grows curious about Meredith's marriage and wonders if there is any truth to what Jen is implying. Later, Lisa, Meredith, Jen and their husbands hang out at Jen's house; While the women dish about their marital issues, the men give their side of the story.

Hip Hop and Heartbreak
Meredith and Seth are happy to be back together, while Heather has an awkward Valentine's Day with her ex-husband and Lisa spends time with her family at the aquarium. And after Jen plans a surprise birthday party for her husband and doesn't invite Mary, Whitney hears that the other women are talking about Jen behind her back and things get heated when she decides to tell Jen the rumor during Sharreiff's birthday party.

In Hot Water
After blowing up at Sharrieff's birthday party, all of Jen's relationships are on the rocks.  Lisa takes some time away from the drama to focus on work, and now that Heather's Beauty Lab and Laser business is thriving, she wants to carry that success into her personal life. With Meredith and Seth in a better place, it's finally time to share some good news. And later, things get heated when Whitney and Heather try to make amends with Jen who's still fuming about Whitney's poor timing.

What do you think The Real Housewives of Salt Lake City, Season 1 tv serie? Can you share your thoughts with other peoples?

These women are crazy it’s fun to watch. the one who married her grandmas husband makes me sick, all the other women make the show worth watching

Really fun, interesting women. One of the better series in the RH. Every storyline makes me want to watch more

The women are all so fake, the dialogue is cringey. They need to hire new scriptwriters. And if you were unaware, yes “reality” shows are scripted. Their writers are unionized and WGA recognized

I love RHOSLC! ❤️ It’s such a great addition to the franchise. And I love everyone in the cast.

Never seen this side of SLC. Very interesting.......Religious issues Galore!

Jen is so fun to watch, definitely worth 5 stars.

It’s a great addition to the housewives franchise

MBMll - So boring ..even in lockdown when I will watch just about anything this is a NO!

I purchased the season pass but Apple only gave me 3 episodes. iTunes wants me to pay again. Why?! I want what I paid for........

What an extremely dull city. How could they skip over Boston or Chicago for....this?

JudiElvis - This is Salt Lake City?

I’ve been to SLC many times. These women are not a good example of SLC. This is Bravos continuing stab at showing how diverse minded they are. Pathetic.

Worst Housewife series ever! The women are horrible liars with terrible face lifts!

DISCODAZE - This doesn’t look as promising as some of them.

I think Bravo is just reaching now for cities to join in to be part of the housewives dynasty. This is not a good one, sorry 🙃

This show is already off on the right foot. Such a great addition to the Real Housewives franchise. The pass price could def be cheaper though because season 1 is never as many episodes.

I live in Salt Lake and they really chose the worse most plastic surgery chicks for this show. There had to have been better options out there for the show🤮

I would say that the price is maybe 5 dollars too expensive, but other than that YAAAASSSS! I recommend! I haven’t yet bought this season, but the rest are very good, and they do get in touch with you when new episodes come out!!! Love, love, love!

The #RHOSLC ladies proved their fashion prowess in glamorous, sexy, sparkling dresses at the Season 1 reunion.

@EW: On tonight's 'RHOSLC,' Jen and Whitney argue over who ruined Sharrieff's birthday party the most, while Heather begs them to let he…

On tonight's 'RHOSLC,' Jen and Whitney argue over who ruined Sharrieff's birthday party the most, while Heather beg… 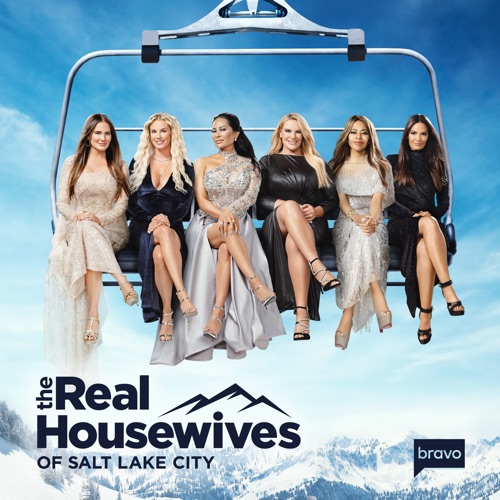