The BBC first aired Doctor Who on November 23, 1963. A cult classic was born. It is so popular it now boasts an estimated 100 million viewers in 54 countries. With a rare blend of cleverly-crafted science fiction and high camp, Doctor Who is one of the longest running and most successful programs in television history. Now, the Doctor and his cohorts are animated! Doctor Who, Animated Wiki

Adventures across time and space with the time travelling alien and companions.

1 - The Infinite Quest
Based on the brilliant and popular series, The Infinite Quest sees the Doctor and his companion Martha step into a new dimension - a cartoon one. The pair set off on an animated adventure through space following a trail of clues across wild and wonderful alien worlds, to find the location of the legendary lost spaceship, the Infinite. However, the evil space pirate Baltazar is also searching for the ship, believing it will grant him his dearest wish - a means to destroy Earth and rule the galaxy. With spectacular animation, this vibrant cartoon is as gripping as any usual episode of Doctor Who.
2 - Dreamland
Dreamland sees the iconic TARDIS touch down in the desert in the USA. Stumbling across a mysterious alien artifact in a local diner, the Doctor is led to Area 51, also known as Dreamland, the US' most secret base. He then finds himself on a momentous mission to rescue Rivesh Mantilax from the threat of the ruthless Viperox and the clutches of the American military.

The sound problem on Dreamland was a terrible glitch and it's great to have it corrected, even for those of us who purchased it flawed. That said, It it a great episode as is The Infinite Quest. The animation on both is not the best it could be, but it's a pair of extra Doctor Who eps and I'm grateful! If they turn the new comic into a similar treat, I'll be among the first to download it and enjoy. Remember, this is a stylized animated version. You do not get the facial expressions the show gives you with the actors. All you get is aliens, great scenes, running, and the doctor. Given the choice between animated and no more extra eps, I'd pick animated. Thank you!

G M-W - could have been better

when watching these I couldn't stop thinking about how actual actors could have done this over 9000 times better. on top of that the animation was pretty bad compared to most 3D cartoons and movies it made david tennant's character look extremely awkward and failed to copy the gestures and expressions that defined the 10th doctor. however the writing was halfway decent for a cartoon. overall, don't get this if your a die hard fan. it will disappoint you.

Promised-Angel - What could have been

I understand why many people don't like this special; it doesn't picture the emotions one could see in the actual series (probably budget problems) by David. However, the story-line is defiantly Doctor Who in whole and they could try something like this for the new series (would have to be deeper in but it could work with Matt Smith). All in all, defiantly something a Doctor Who fan should watch and think about what could happen next.

I was not disupointed with this. I would never take this off my ipod for any reasson! I love the animeted Doctor and Martha! I wish ther was more!

Ok so I just became a huge Doctor Who fan and I decided to see this and I was both suprised and dissaponited at the same time. I was suprised by the fact that the computer animation was amazing but dissapointed in the Flash animation. While the computer animation was slick and smooth the Flash animation was flat and dull. It was like watching a motion comic at times. Not that motion comics are bad mind you, but if your thinking about maybe doing a TV show this way you might want a little more movement from your characters. Bottom line if you love Doctor Who you will like this and it may even be a great way to get your kids into it. But stay way if you don't know anything about Doctor Who.

sxiong - Ok, but not great.

I enjoyed this animation, but it was a little too short and perhaps they could have devised a better story/plot. My only gripe was they should have put in Rose Tyler instead.

I love Doctor Who and David Tennant is probably my favorite Dr but I was just bored by this episode. With the Doc and Maartha having to collect different pieces of a whole unit, it reminded me of the key to time story line from the classic series but not as developed.

I had high hopes for this, especially after just watching Planet of the Dead. To me this rates lower than any of the Series 1-4 plus the Special episodes. I wish the story had been a lot better. It felt like a bad comic book story. The animation was not great, and I could have forgiven this if the story had been good. I am desparate for new Doctor Who, but this really made me love the Live Action series more. I hope they try again to make animated stories, I just hope they are better.

How can anyone expect real acting from a cartoon. I love cartoons and I can't get enough David Tennet and Freema Agyeman. I think they were the best together and I am not disappointed by this. Loving it and I want more.

This is such a fun episode. A little hard to follow at some points, but it truly holds up to the charm of a live action episode. Any true Doctor Who fan will enjoy this!

This Episode was clearly a throw away. The animation is poorly done with a jarring lack of smoothness one has come to expect in any other animation. Many Fans will of course see past this but I am afraid I could not. Poor effort all around.

iTunes corrected Dreamland's audio track. Initially, only the music and sound effect could be heard, but not the dialogues. People who downloaded the first version got credited their money back. Just tried the new version and, yes, we now hear David Tennant. Thanks Apple for the prompt service.

Charlie de b - I love DOCTOR WHO

megan munch - This is for kids

For those of you being so harsh , remember this is most likely for children. My son loves it and finds the animated version exciting. Obviously not as exciting as the real show but still fun all the same. Ease up on the criticism people.

Scifi gaga - Not bad at all!

If you like doctor who & you dont mind animated shows, this isn't bad- the animation is okay & you still get the doctor's quips....it's not manga nor is it meant to be!!! A nice editon to our collection, hey, there are alot of episodes that don't blow my mind away - at the end of this one my hubby & I thought it would have been nice to see a few more animated....

I only watched the preview, and I hated it. The graphics are so poorly used. Note: watch the preview before you buy it....

This is NOT doctor who this is rubbish

IT SUCKED! IT'S NOT AS GOOD AS THE REAL DW

It is not as good as the real DW

ricjones - Takes the new series back to the old days

When you consider that this originally ran as a cliff hanger serial, part of a weekly UK Kids magazine program 'Totally Doctor Who' the final story isn't too bad. The repetitive nature of the dialog allowed for a 'catchup' to be incorporated into the story, rather than have a one minute 'last time on...' before the next 3 minute episode. The animation style isn't for everyone BUT this is an occasion where you can watch Doctor who as we used to in the seventies and eighties: forgive the production values and enjoy the story.

So many Dr. Who franchises... The animated series? If you are unsure about this, just watch the 30 second preview, it should make your mind up

Okay, the animated series just isn't as good as the normal series, I think it just ruins the whole thing, so do us a favour and DON'T buy this, buy the normal Doctor Who.

I am currently in the process of projectile vomiting

Docter who isn't right without proper people not cartoons

I'm not surprised. America always gets Doctor Who episodes before us on here and they get more 'extras' than us: Dreamland ,Confidentials and loads more. Doctor Who is BRITISH! Please just put this on already it's been 3 years!..

Where's Dreamland? You have the image for it on the download icon, this is false advertising!

Great, and entertaining trip through time, well worth £1.89!

The brash boostful doctor lives on in this poor flash amination story. not even worth the 99p discount price. Might keep some entertained but the limited story and cast does not take true advantage of the medium at all. A comic has more dynamic action and its static!

The animation looks like a 10 year old's flash animation, and the story sounds like something thought up by a 5 year old.

Looking forward to Furry Doctor Who -

On the note of Doctor Who. We have a lot in common David Tennant is my favourite too along with Matt Smith and Jodi…

I’m fairly open about my other interests outside of toku, but: -Magic: the Gathering -Pokémon -Fire Emblem -Readin…

@Dyslexic_aDve I had the same problem. Went to the doctor and he asked "what are the symptoms?" "A yellow animated…

@HjRobins @Merganman4 @TheCyberdevil 'Cheap'? Really? To me it looked like the most luxurious animation of Doctor W…

I wanna have some Doctor Who Big Finish stuff be animated in stop motion. The effects should be mixed with CGI.

My recreation of the Doctor Who story "Mission to the Unknown". Animated in Blender. #DoctorWho #Daleks…

@squimp2: who animated THIS bullshit? this gay ass poop? couldnt have been me (it was me) 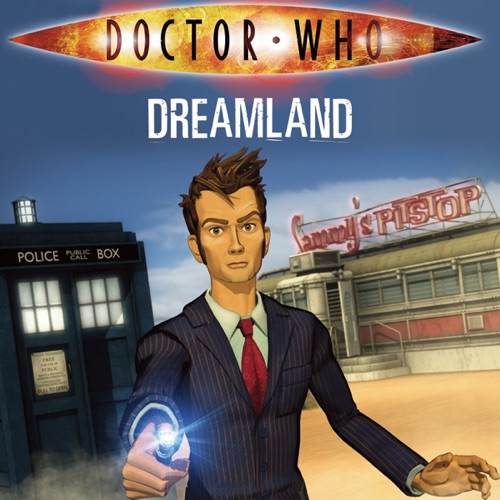