You have just entered The Twilight Zone, a mysterious fifth dimension where the imagination, the unusual, and the real have combined together. This first season will take you on a pure thrill ride, as you encounter various stories and characters that can only come from the deepest of imaginations. From aliens visiting earth, to mannequins coming alive, to time travel, to dealing with Mr. Death, and even apocalyptic events that will leave one man alone in the world with all the books and time to finally read them, this season is made to entertain your wildest dreams and leave your mind wanting more. So pull up a seat and join Rod Serling, the creator of the show, as he takes you from one twisted fantasy to the next. The Twilight Zone (Classic), Season 1 Wiki

The first season of The Twilight Zone aired Fridays at 10:00–10:30 pm on CBS from October 2, 1959 to July 1, 1960. There are 36 episodes, including the pilot, "Where Is Everybody?". The theme music for this season, written by Bernard Herrman, is different from the music most commonly associated with the series, written by Marius Constant for the second season onwards.

Where Is Everybody?
Mike Ferris finds himself in a town strangely devoid of people. But despite the emptiness, he has the odd feeling that he's being watched...

One for the Angels
A street salesman cleverly eludes Death. But if he lives, a little girl must die in his place.

The Sixteen-Millimeter Shrine
An aging, former movie star lives and dreams in the past, constantly watching her old movies alone in her room.

Walking Distance
Martin Sloan, driving through the country, leaves his car and starts to walk toward his hometown, Homewood. He finds things exactly as they were when he was a child.

Escape Clause
A hypochondriac exchanges his soul for immortality and indestructibility.

The Lonely
Corry is stranded on an asteroid after being convicted of a crime. He receives as a present a robot who looks, sounds, and acts like a real woman.

Time Enough At Last
A bank teller, Henry Bemis, longs for time alone to read books. He gets his wish...

Perchance to Dream
A man is terrified of falling asleep for fear he might die.

Judgment Night
In 1942, a German wonders why he's on the deck of a British steamship, with no memory of how he got there, and an overwhelming sense of impending doom.

And When the Sky Was Opened
Three astronauts have returned from this first space flight. Major Gart is hospitalized with a broken leg. The other two, Colonels Harrington and Forbes head for a bar. Harrington gets a strange feeling...

What You Need
A two-bit thug thinks he's found the key to a better life in an old sidewalk salesman who has the uncanny ability to tell people what they need the most.

The Four of Us Are Dying
A man who can change his face to resemble others gets into hot water with gangsters.

Third from the Sun
With all-out nuclear war about to ignite, a scientist and his pilot friend plot to escape on an experimental spaceship.

I Shot an Arrow Into the Air
Three astronauts crash on what they believe to be an asteroid. Unfortunately they have only limited water supplies to sustain them.

The Hitch-Hiker
Alone on a cross-country trip, a woman continually sees the same hitch-hiker everywhere she looks.

The Fever
Tight fisted Franklin Gibbs is not pleased when his wife wins a trip for two to Las Vegas. But things change when he falls under the spell of a slot machine that calls his name.

The Last Flight
A World War I flying ace flies through a mysterious cloud - and lands at a modern U.S. air base in the year 1959!

The Purple Testament
Lt. Fitzgerald has found his own special wartime hell. Looking into the faces of his men prior to battle, he has the disquieting ability to see who is about to die.

Elegy
Three astronauts land on what looks like Earth 200 years before they left - only all of the people seem frozen in time.

The Monsters Are Due On Maple Street
Paranoia strikes the residents of Maple Street when they believe human-looking aliens have invaded the neighborhood.

A World of Difference
Businessman Arthur Curtis discovers that life as he knows it doesn't really exist.

Long Live Walter Jameson
Walter Jameson is an excellent history teacher who talks about the past as if he had lived it.

People Are Alike All Over
When a space exploration crashes on Mars, the surviving passenger is surprised to find that Martians are human-looking, very friendly and apparently just like us...

Execution
Just before being hanged for shooting a man in the back, a man in 1880 is transported into the future.

The Big Tall Wish
An over-the-hill boxer gets a boost from one of his biggest fans - a little boy with an unwavering belief in magic.

A Nice Place to Visit
After being shot to death, Rocky Valentine encounters the amiable white-haired Mr. Pip, who gives Rocky everything he wishes for.

Nightmare As a Child
Schoolteacher Helen Foley finds a strange and very serious little girl on the stairs outside her apartment. The little girl seems to know her, and tries to jog her memory about a man she saw earlier that day.

A Stop At Willoughby
Riding home on the train one day, a man falls asleep and dreams it is 1880, and he is entering a small town called Willoughby.

The Chaser
A man, desperate to win the affection of a beautiful woman, slips her a love potion. He is overjoyed that the potion works so well...at first.

A Passage for Trumpet
A trumpet player who's convinced he'll never amount to anything attempts suicide and finds himself in a world where no one can hear or see him.

Mr. Bevis
An eccentric loser gets a new life from his guardian angel, but there is a price to keeping it.

The After Hours
A woman discovers that the floor of a department store, on which she bought a gold thimble, doesn't exist - and that her "saleslady" is really a mannequin!

The Mighty Casey
Dr. Stillman arranges to have his human-looking robot signed up as the star pitcher of the Hoboken Zephyrs.

A World of His Own
A playwright makes characters come to life.

What do you think The Twilight Zone (Classic), Season 1 tv serie? Can you share your thoughts with other peoples?

This television show is unquestionably the best show ever made in the history of mankind! Rod Serling's directing andnarration style are magnificent. The amazing twists and turns that the plot shoots you through are invigorating. i strongly reccomend to viewers 10+!!!!!!!

Finally i found it with high quality, thank you very much

This is the greatest show in the history of television, I love The Twilight Zone with a passion.

thinkman - Resonably priced by iTunes, but…………

I recently bought the entire 28 DVD set of seasons for under $60.!

One of the best TV series ever made. An added bonus, it's fun to watch major stars in it before they were famous. Pass the popcorn and enjoy! 🍿

Undoubtedly one of the best TV Shows of all time.

This is a must-own for all fans!

One of the all time best seasons of a tv show. Right up there with season 1 of Lost and 24.

And so begins one of the greatest series I've ever seen. This New Year's, it was a toss-up between the ball drop, and the twilight zone marathon. Lol

This is the best tv show ever.

Twilight zone,by far is one of the best series that has ever been written. Rod Serling's excellent writing turns all the shows into classics. Made in the early 60's,it is still a classic today and will remain so.

and it puts most recent shows to shame. No special effects to speak of, some cheesy sets BUT many great performances, fantastic music and THE WRITING! Not only by Rod Serling, who somehow managed to turn great stuff on a daily basis, but by some of the great sci fi writers of the day who contribute to this wonderful series.

Music Phanactical - So much fun

I'm you're average teenager who gets bored by black and white 1950's shows. This is one of the exceptions, a show that always keeps you in suspense. This season has a lot of really good episodes such as (my favorites ranked from good to great): 7. Walking Distance (A much more loveable and uplifting episode) 6.Monsters...Maple street (a classic) 5. People are alike all over (A thought provoker) 4.Time enough at last (another classic and emotional tale) 3.Where is Everybody (Gives me chills) 2.Escape Clause (Very edge of your seat thriller) 1.And When the sky was opened (MY FAVORITE OF ALL TIME) I don't have time or room to write all 25 but I encourage you to watch this show, it's much better than you think!

Alex Razos - Hands down, One of the Best TV Shows that EVER existed.

If you have never seen an episode of the Twilight Zone, there are some factors to take into account. Firstly, this was the first of its kind. Before the Outer Limits. Before Amazing Stories. Before Beyond Belief. And it was the best. By far. This is the first season of the brilliant TV show which has episodes here dated back to the 60's that still freak me out. "Where is Everybody" & "When the Sky Opened" are probably my favorite episodes but all are worth watching. Rod Serling, the show's creator makes a brief appearence before every episode begins to tell you who will be taking a trip into Twilight Zone while briefly openening the shows plot for you. From there, each episode (Approximately 25 minutes) gets to the point with it's witty storylines and downright weirdness. Just my cup of tea! :) My download to the Twilight Zone has begun...

Thank you for finally getting whole seasons and not just the "volumes " you had before. Please get the whole series up soon. Great to have seasons 1,2,, and 3 now :))

Quite possibly the greatest tv show of all time.

ChumCanada - Why is it incomplete?

Whoever would give this series only a 1 star rating truly has no soul.

chuknorth - One of my favorites.

I’m quite enjoying this first season collection. Consider also the first seasons of Outer Limits and Night Gallery. These are like Grimm’s tales for grown ups. Serling’s view of the dark and mysterious side of life, like the deep philosophical questions of the nuclear age, are elements sadly lacking in modern television, or at least had been until recently. The best episodes leave you feeling a little cold and spooked, and this one has that chill. it’s not alone in that regard.

Josh Buxton - I BOUGHT EVERY EPISODE!!!! 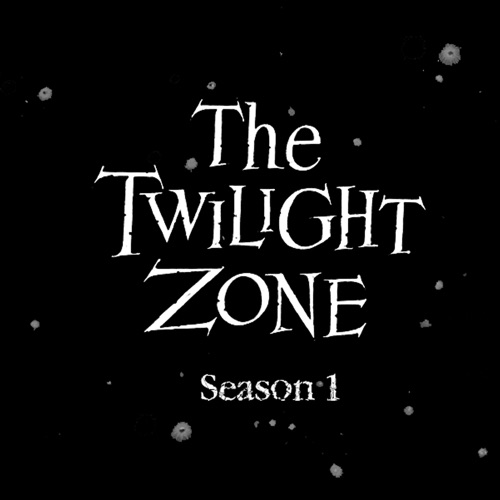