Rod Serling's classic, groundbreaking series that baffles the mind and confuses the consciousness continues to thrill fans of all ages. A few of the standout episodes from season three include "Five Characters In Search of an Exit", "Quality of Mercy" and "Cavender Is Coming". The Twilight Zone (Classic), Season 3 Wiki

The third season of The Twilight Zone aired Fridays at 10:00–10:30 pm on CBS from September 15, 1961 to June 1, 1962. There are 37 episodes. Continuing with Marius Constant's theme music, a different set of graphics was used for the opening, consisting of a rotating cone with concentric circles suggesting a spiral, receding into a star field. Rod Serling's narration from the second season was used, with the verse "That's the signpost up ahead" taken out: "You're traveling through another dimension. A dimension not only of sight and sound but of mind. A journey into a wondrous land whose boundaries are that of imagination. Your next stop—The Twilight Zone." Some subtle changes in the opening's acoustics were made beginning with Person or Persons Unknown.

Two
A man and a woman, on opposite sides of a future war, encounter each other in a deserted town.

The Arrival
A plane lands safely, but all its passengers, pilot and crew are missing!

The Shelter
When a nuclear attack appears imminent, several suburban friends and neighbors fight over control of a single bomb shelter.

The Passerby
On the road home from the Civil War, a Confederate soldier stops at a burned-out house and gets to know the owner, a recent widow.

A Game of Pool
Championship pool player Fats Brown returns from the grave for one last game.

The Mirror
After a poor but ambitious Central American farm worker overthrows his country's tyrannical leader, he believes he sees assassins everywhere. A look in the mirror reveals his most dangerous enemy.

The Grave
Before he died, notorious gunslinger Pinto Sykes put a curse on hired-gun Conny Miller. Miller returns to town and is challenged to visit the grave of Sykes, despite the curse.

It's a Good Life
Little Anthony Fremont controls an entire town with his ability to read minds and make people do as he wishes. Which is a real good thing.

Deaths-Head Revisited
A former Nazi SS Captain returns to the ruins of a concentration camp to reminisce, and is met by one of his victims.

The Midnight Sun
The Earth's orbit has been changed, drawing ever closer to the sun and promising imminent destruction.

The Jungle
Alan Richards plans to build a dam in Africa on a tribe's ancestral land. The tribe's witch doctor puts a curse on him.

Once Upon a Time
Woodrow, a janitor living in the year 1890, accidentally activates a time traveling helmet which transports him to 1962 - then promptly breaks down.

Five Characters in Search of an Exit
A hobo, clown, bagpipe player, ballerina and military officer are trapped in a huge cylinder.

A Quality of Mercy
A gung ho young soldier gets a new viewpoint on war when he inexplicably changes places with a Japanese officer trying to stop his superior from leading a charge against American forces.

Nothing in the Dark
A lonely old woman refuses to leave her apartment for fear of meeting "Mr. Death."

One More Pallbearer
Paul Radin has invited three people to join him in his bomb shelter.

Dead Man's Shoes
A vagrant steps into a murdered gangster's expensive shoes and is taken over by the dead man's ghost, who vows to remain on Earth to seek revenge against his killer.

The Hunt
On a hunting trip, Hyder Simpson and his dog Rip dive into a lake after a raccoon. When he gets home he finds that no one can see or hear him.

Showdown With Rance McGrew
Actor Rance McGrew makes TV Westerns for a living, but he's a lousy actor and a worse cowboy. Despite that, each week he "wins" against the bad guys. Finally the bad guys have enough and send Jesse James to Earth to teach McGrew a lesson.

Kick the Can
The senior residents of Sunnyvale decide that the secret to youth is acting young, and in particular playing a childhood game called "kick-the-can."

A Piano in the House
Fortune discovers that a piano he bought his wife for her birthday has magical properties - the music that it plays makes people reveal their true essence.

To Serve Man
The Kanamits, 9 foot tall aliens, arrive on Earth with one lofty goal: To Serve Man.

The Fugitive
Old Ben, who is able to transform himself into anything, tries to help a crippled little girl.

Little Girl Lost
A six-year-old girl rolls under her bed and vanishes into a fourth dimension. Her parents and a neighbor struggle to free her before the hole between the dimensions closes forever.

Person or Persons Unknown
David Gurney wakes up to find that no one - his wife, his co-workers, his best friend, not even his own mother knows him.

The Little People
An astronaut declares himself a god when his ship lands on a planet populated by people smaller than ants.

Four O'Clock
Oliver Crangle is a bitter, prejudiced man. Through unknown means he intends to shrink every evil person in the world at four o'clock.

Hocus-Pocus and Frisby
A loud-mouthed braggart's boasts attract the attention of some aliens.

The Trade-Ins
An elderly couple visit the New Life Corporation, hoping to transport their personalities into youthful artificial bodies.

The Gift
An alien who crash-lands into a remote mountain village stirs up the villagers' fears and animosity, but he befriends a little boy and gives him a mysterious present.

The Dummy
A ventriloquist is convinced that his dummy, Willie, is alive and evil. He makes plans for a new act with a new dummy: plans that Willie doesn't support!

Young Man's Fancy
When a newlywed couple briefly return to the groom's childhood home, the ties of the past prove too strong to resist.

I Sing the Body Electric
A widower buys a robot grandmother for his three children.

Cavender Is Coming
Cavender, an angel trying to win his wings, tries to help down-on-her-luck Agnes, who has just been fired.

The Changing of the Guard
An elderly private school teacher wonders if his life has meant anything as he contemplates suicide on Christmas Eve and is reminded by former students that he has, indeed, made an effect on the lives of his students over the years.

What do you think The Twilight Zone (Classic), Season 3 tv serie? Can you share your thoughts with other peoples?

My highly preferred season of a great TV show classic

These TTZ are classic TV at its finest. One that stands out in this season is the Littel Girl Lost one. I read it was the inspiration for the classic movie Poltergeist. Good stuff

Put the rest up and I will buy them!

Pordge59 - The worst of the series

After season 2, Season 3 was a downer. I think the writers were trying to come up with new ideas but the quality was not there. I saw some of the episodes rewritten somewhat and came back in season 5. There are some good episodes; however they are relatively few. 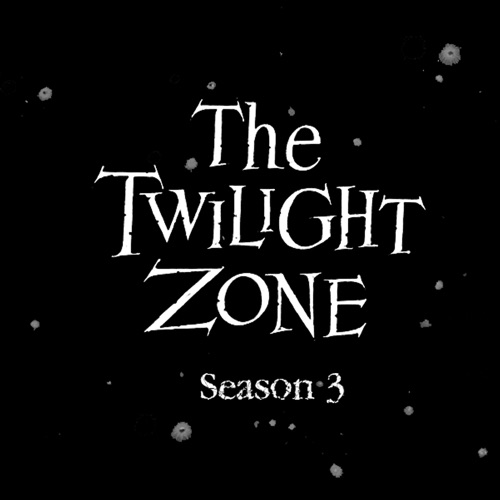