Join the fight to save the human race! Now -- you can relive every action-packed moment of the epic Battlestar Galactica saga in this special digital box-set, presented in two Volumes. In Volume 1, you’ll get Seasons 1 and 2, plus the four-hour miniseries that started it all. In the miniseries and Season 1, a surprise attack by the robotic Cylons scatters the remnants of humanity throughout the galaxy, and it’s up to steely President Laura Roslin (Mary McDonnell) and battle-hardened Commander William Adama (Edward James Olmos) to unite the desperate survivors. In Season 2, the fight to save humanity rages on. The ongoing battle of President Roslin and Commander Adama continues, in their heart-pounding crusade to save humanity from the deadly Cylons – even as civil war looms within the fleet between their followers. BSG: The Complete Series, Vol. 1 Wiki

The world ended with no warning, and all that was left… was hope.

A truce between the humans of the Twelve Colonies and the Cylons—intelligent robots designed by humankind—lasts for 40 tense and silent years. Battlestar Galactica picks up just as the Cylons commit mass genocide against humanity. Only the Battlestar Galactica (an old warship about to be decommissioned and turned into a museum) and those souls fortunate enough to be aboard other starships were able to survive the attack. In the aftermath, the Galactica's commanding officer, William Adama, finds himself responsible for safeguarding the last remnants of the human race—fewer than 50,000 desperate survivors. Meanwhile, the annihilation of the Colonial government results in the succession of the Secretary of Education, Laura Roslin, to the presidency. Driven by prophetic visions and political necessity, the Galactica travels through uncharted space in hopes of finding the mythical, lost 13th colony—Earth.

B Wisen - One of my favorite shows but no episode metadata ruins it.

This is one of my all time favorite shows. To see Apple botch this so badly is upsetting. If you buy Vol. 1 and 2 of this, you will be surprised to find Apple was too lazy to set this up properly. There is no metadata in any episode for the order so it's organized as follows mini series episode 1, season 3 episode 1, mini series episode 2, season 3 episode 2, season 1 episode 1, season 3 episode 3, etc. This has been a problem as long as Apple has sold these box sets. They DO NOT CARE about the customers. I spent well over a week explaining the problem to customer support. They treated me like an idiot that wasn't downloading the episodes in the right order. I explained the problem clearly multiple times, included screenshots, and even links to multiple year old websites explaining the very same problem. if you love this series and want to purchase it as cheap as possible, either buy it on Vudu where they cared enough to organzie it prooperly for the customers. If you must have it on iTunes, buy just complete series Vol 1, then buy seasons 3 and 4 separately. It's a shame such an easy problem will never be fixed. If apple cared about their customers, they'd put half an effort into this and spend the 45 seconds it takes on their end to add proper metadata(they won't.) Be warned.

If you haven’t watched it , do it now.

strawberrythief - Not the complete series

This is NOT the complete series.

Where is the season/episode metadata for these collections?!

the greatest83 - DO NOT BUY DEFECTIVE PRODUCT

When your purchase vol&2. They show as out of order and it’s very hard to watch. Buy individual seasons instead!!!! Apple has no intentions of fixing it!

The show is great but it downloads on to iTunes in no particular order. Super annoying especially since iTunes doesn't really allow for much manipulation of how things are presented. Apple employees need to learn to format. Netflix can deal with it and steam at the same time. Apple doesn't even have to worry about streaming in the same way. Irritating.

Clay Alchemist - 7 years and STILL out of order

Terrific show but there is no order to the show in iTunes. I see this has been a problem for years and has no been fixed. Seriously??? Why promote it if you aren't going to fix the issue first!?

Cojanks - Do NOT buy this complete Series

iTunes does not property add in the season metadata for this whole series causing the series to not be able to seperate by season. The episodes are out of order and iTunes does not allow to edit the metadata itself. Buy individual seasons if you want to be able to watch this correctly.

Seasons and Episodes are not organized in iTunes library when downloaded. This needs to be removed from iTunes store until fixed.

Can we not put the episodes in viewing order? Apple has a problem with seasons and episodes being in order. Not to mention after 10 seconds starting the next episode. Netflix learn it Apple.

iDavid956 - This is my favorite Sci-Fi series of all time but this iTunes collection is not worth it!

This is one of the great sci-fi series of all time and I already own the Blu-ray complete series box set which included everything except the mid-4th season webisodes. I would get the iTunes BSG collection if it included everything. It currently doesn't include the Razor movie (which is not available at all on iTunes), The Plan movie, the extended episodes from the Blu-ray collection, the original two-hour finale, the creator commentaries, the Blu-ray extras, and neither the pre-3rd season nor mid-4th season webisodes. If it had all that, I'd consider selling my Blu-rays and buying it digitally. Until then, I'll pass. You're better off buying the US Blu-ray box set when it occasionally goes on sale.

I love BSG and jumped all over the complete digital box set. The show is just as sgood as when I first watched it, but the organization of this is terrible. Some Seasons don't have a season listed in the metadata, so you end up with the entire series organizized as "Season 3, ep 1; season 1 ep 1, season 4 ep1, season 3 ep 2, etc." Pretty big pain if you're watching directly on iTunes and could be solved literally by adding a digit to the series metadata.

First off, this series is really one of the reasons I love sci-fi. The actors are top notch and the pace is excellent. If you haven't seen this series and like sci-fi shows, see it. Though this is now an older series it still holds as far as not having an outdated feel and look. Cons are that Apple is selling this for an outrageous price, $49.99 and that is what you can get the complete blu-ray series for most any where they sell it. This product is $49.99 for half the series, not a fair or good price compared to the market. If you prefer digital get a blu-ray burner and burn a copy for the extra $50 it costs for the full series on iTunes. The iTunes version is in HD NOT blu-ray so keep that in mind.

Great "in space" series. Love the HD. It does go a little grainy sometimes but nothing that distracts from the show in any way. I love binge watching shows and this is a great one. Can't go wrong for the price either.

Five stars for the show, but three due to the grainy video at times. I have downloaded this three times to make sure it was not a download problem, and the files sizes I downloaded did not match the file sizes listed.

After purchasing last week, I was able to view and download the 2 part miniseries. Now this week, they are unavailable but listed as Season Only. The store appears to be confused on if they are included or not.

Are there subtitles (english) available for some or all of the episodes ?

I want to buy, but I want to make sure that those gorgeous space battle scenes will shine on the 4K large screen..

chuckles100 - Episodes out of sequence as well

The show is fine, but the picking through to find the next episode is just a weak effort on Apple's part. Similar to when somebody puts DVDs in the wrong case....

penguinstorm - Episodes Out of Sequence

Love the show. It’s fantastic, but on my iPad the episodes are displaying completely out of sequence which makes it impossible to watch. They display in the proper order on Apple TV. Fix this please. It’s ridiculous.

Ok, so total fan boy, and have given 5/5 ratings for other versions…there is a reason Time Mag rated this best TV show of the year during its first or second season. The first 2 if not 3 seasons are some of the best TV watching of my life (born 1970 :) Great story and character lines that involve end of human kind, religion, god, and plain old humanity and what it means. Way more than simple "star trek sci-fi" as a theme. Please give this a try and it will change your view of what good television can be!

Thought I wouldn't like it so I put off watching it for years, when I started watching it I couldn't sop. Great show for anyone, it is not too sci fi to be unbelievable. 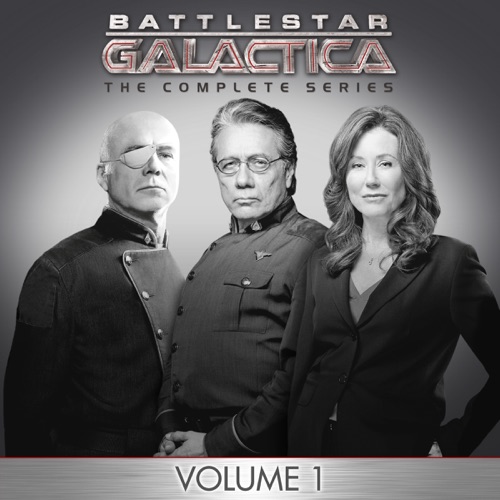