Wedding bells are ringing in season five of Modern Family. As Cam and Mitchell bicker over plans for their big day, the rest of the family has its hands full adapting to new jobs, new schools, and a new male nanny. There are babysitting disasters, an anniversary to celebrate, misguided male bonding, and everything from high-stakes poker to high-maintenance in-laws.

Fantastic! Another season in the books! <3

Modern Family has to be the best show ever! The sarcasm and very dry humor is the best thing ever!

I❤️❤️❤️❤️❤️❤️ this show they couldn't make it any better!!! Their jokes are hilarious and perfectly timed, the plot is great, and it's just a great show in general!

I love Modern Family, but they totally ran out of ideas for this season. If you're looking for a really really good season, do 6

Our family really enjoys this TV show. It normalizes families and their issues. It makes us laugh.

Modern Family Season 5 was great. I love the show

it's still "good" and love the cast, but I feel like I watch it more out ot loyalty than "dying for the next episode" as was the case in previous seasons. Lily's sarcasm isn't endearing, just annoying and bratty and a lot of the jokes seem forced and unnatural

The Windy Keeper - so

THE SHOW IS AMAZING, I just had to write something here to a very different effect: ITUNES - I don't know if anyone has brought this to your attention yet, but whatever shade of yellow you are using for the background here PLUS the white text is extremely hard on the eyes. Maybe you guys can play with the hue, I don't know, but it hurts to read the episode descriptions!

This show is great for the whole family! Even 7-8 year olds. Im 10 and i cant stop watching it!!! Serieously u should get it!

Gardening rocks - I loovvee this show!!!

This show is the funniest show I have ever seen. It has a little humor for everybody and it is crazy how accurate it is (it is very similar to our family)

bought in SD to save $$ and space on my iPad

Love this show have the complete 1-4 box set of Modern Family and now have season 5 pass! Still as good as ever. Hopefully the episodes keep up the good work

I absolutely love this show. It's defiantly worth the money for the season pass. Best shoe on tv by far! 😄

Harbison1 - the funniest show ever

What happened? This used to be a funny, interesting show. Now it's full of schlock and sentimentality. I would think twice before buying season 5. It's a shadow of prior seasons.

This IS the best show on television!!!! Hands down!!

The best show on TV. Pice Is better if you buy the whole season pass. Totally worth it.

I'm so excited and I can't wait for it ti come back!

Not cheap for what it is

on episode # 4 they say they are angry about missing one of lukes volleyball games but it is soccer not volleyball.

this series is hilarious definitely a must buy!!!!!

bentherain - Extras and I'll pay for it.

I love Modern Family and have every season on blu ray except 5. The reason why I buy the disc is because it has extras and includes the best part, the gag reel! Until I see the extras included with the season, then I'll be more inclined to buy every season on iTunes!

I love this show so much. The characters work so well together and it’s filled with so many great one-liners. I enjoy how they take so many common situations, add funny elements to them, but you can often relate.

I love this series, but for some reason I can't download this season in SD. I click on the SD button and it flashes, but isn't selected and I can only download in HD. So I guess I won't be downloading it. :(

Fleurdesel - where are the missing episodes ?

Love the series, but where are the episodes 17-18-19 ??? Could you please download them ? I bought the pass, it is not to have missing episodes

nw7000 - Where are the rest of the episodes iTunes?

Come on iTunes, where are the rest of the episodes? At least 6 other episodes have already aired. Go download instead people.

Shouldn't it be on iTunes again now???

my name is paul Mcdermont - Sweet and heartfelt

I love modern family, especially this season. The way all of the characters develope just that little bit more is great. And the warming morals that linger in each of the episodes are a great touch. Five stars, nothing less!

I love Modern Family that is why I bought the season pass, but first of all it is too expensive $40 for one season is too much no wonder why people illegally download tv shows and movies. Second of all iTunes has been adding videos once a week, but after the 8th episode they haven't uploaded any new episodes for almost 2 months, they can't say that they haven't recorded any new episode because one of my friends downloaded it and this person has up until episode 10. So please upload frequently and reduce the price if you want more sales.

You would think that a show this funny would run out of jokes but it is the exact opposite. The episodes are getting more hilarious As the title suggests I give this 11 out of 10

modernfamilylover101 - The best season so far!!!

This is the best season yet! It is worth buying!! it has gotting more funny it is the best ever!!!

This show just keeps getting more and more clever with its humour.

OMG! It's back for another season!! I have seen nearly 5 episodes and it's just hilarious! Can't wait for the rest of the season!! I Iove you MODERN FAMILY!!!

really good tv programme but REALLY expensive!! yesterday it was £8 but now shot up!!! very disappointed.

Modern Family seasons 1 - 5 boxsets are available on demand and on Sky go.

Cjshare - The best Comedy ever!

I can watch this series again and again. So relative to every day life. An easy 5 stars.

I've been hoping for Modern Family to come on iTunes, well Seasons 3 and above really, but I would like to buy them together. Please put 3 + 4 in

ThomasWales - Where are the other seasons?

This is ridiculous. Where are seasons 3 and 4? Maybe it's time to switch to netflix...... 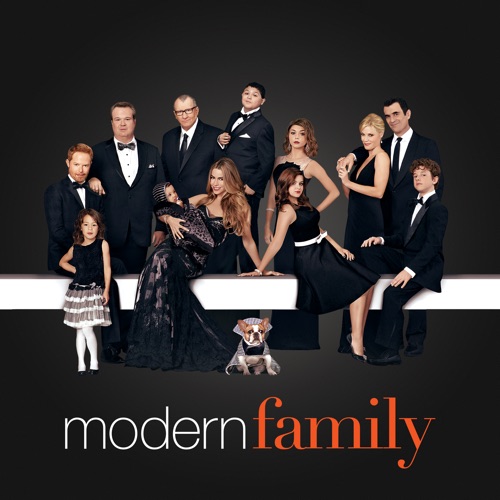